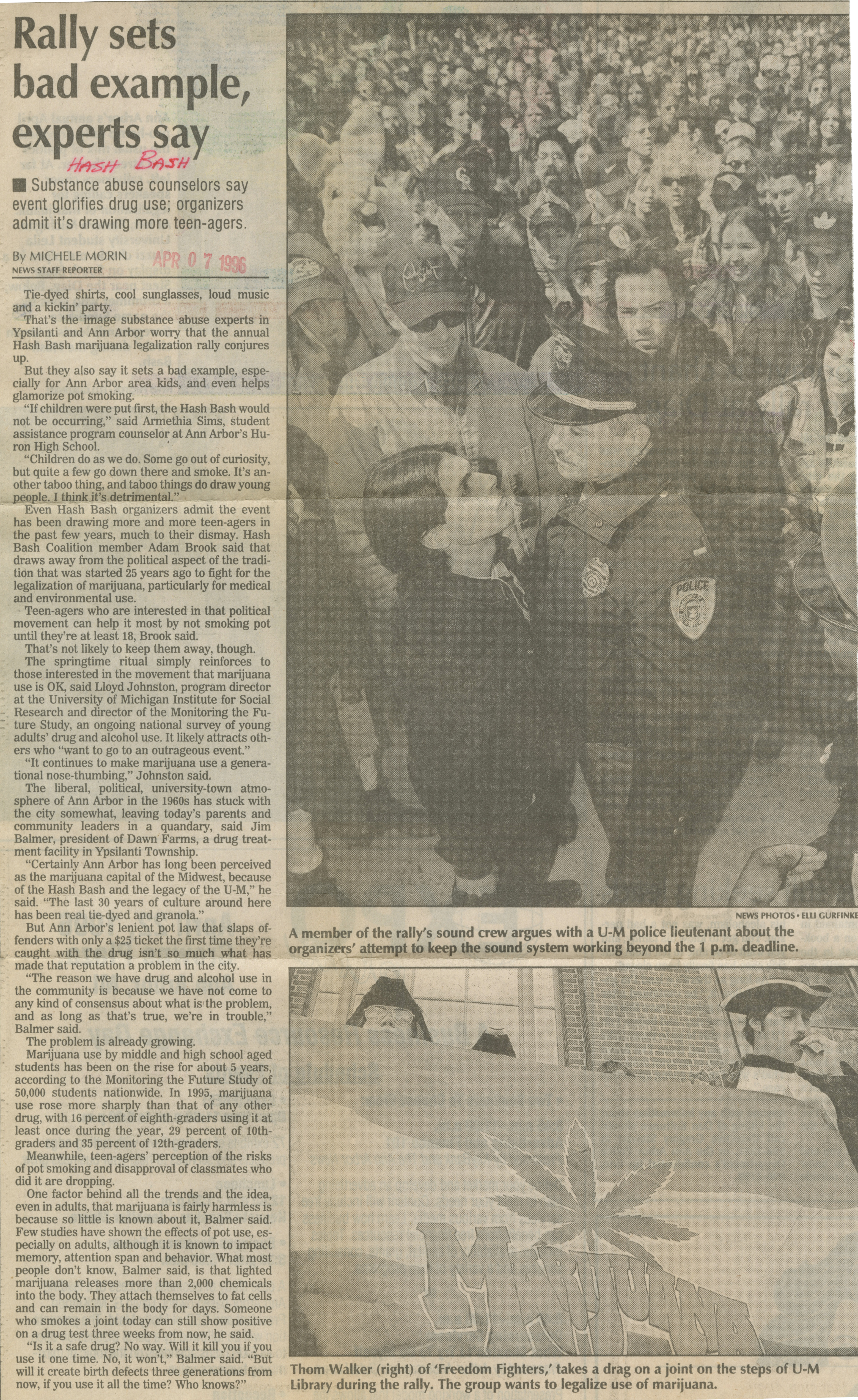 Substance abuse counselors say event glorifies drug use; organizers admit it's drawing more teen-agers.
By MICHELE MORIN
NEWS STAFF REPORTER
Tie-dyed shirts, cool sunglasses, loud music and a kickin' party.
That's the image substance abuse experts in Ypsilanti and Ann Arbor worry that the annual Hash Bash marijuana legalization rally conjures up.
But they also say it sets a bad example, especially for Ann Arbor area kids, and even helps glamorize pot smoking.
"If children were put first, the Hash Bash would not be occurring," said Armethia Sims, student assistance program counselor at Ann Arbor's Huron High School
"Children do as we do. Some go out of curiosity, but quite a few go down there and smoke. It's another taboo thing, and taboo things do draw young people. I think it's detrimental."
Even Hash Bash organizers admit the event has been drawing more and more teen-agers in the past few years, much to their dismay. Hash Bash Coalition member Adam Brook said that draws away from the political aspect of the tradition that was started 25 years ago to fight for the legalization of marijuana, particularly for medical and environmental use.
Teen-agers who are interested in that political movement can help it most by not smoking pot until they're at least 18, Brook said.
That's not likely to keep them away, though.
The springtime ritual simply reinforces to those interested in the movement that marijuana use is OK, said Lloyd Johnston, program director at the University of Michigan Institute for Social Research and director of the Monitoring the Future Study, an ongoing national survey of young adults' drug and alcohol use. It likely attracts others who want to go to an outrageous event."
"It continues to make marijuana use a generational nose-thumbing," Johnston said.
The liberal, political, university-town atmosphere of Ann Arbor in the 1960s has stuck with the city somewhat, leaving today's parents and community leaders in a quandary, said Jim Balmer, president of Dawn Farms, a drug treatment facility in Ypsilanti Township.
"Certainly Ann Arbor has long been perceived as the marijuana capital of the Midwest, because of the Hash Bash and the legacy of the U-M," he said. "The last 30 years of culture around here has been real tie-dyed and granola."
But Ann Arbor's lenient pot law that slaps of fenders with only a $25 ticket the first time they're caught with the drug isn't so much what has made that reputation a problem in the city.
"The reason we have drug and alcohol use in the community is because we have not come to any kind of consensus about what is the problem, and as long as that's true, we're in trouble," Balmer said.
The problem is already growing.
Marijuana use by middle and high school aged students has been on the rise for about 5 years, according to the Monitoring the Future Study of 50,000 students nationwide. In 1995, marijuana use rose more sharply than that of any other drug, with 16 percent of eighth-graders using it at least once during the year, 29 percent of 10th graders and 35 percent of 12th-graders.
Meanwhile, teen-agers' perception of the risks of pot smoking and disapproval of classmates who did it are dropping.
One factor behind all the trends and the idea, even in adults, that marijuana is fairly harmless is because so little is known about it, Balmer said. Few studies have shown the effects of pot use, especially on adults, although it is known to impact memory, attention span and behavior. What most people don't know, Balmer said, is that lighted marijuana releases more than 2,000 chemicals into the body. They attach themselves to fat cells and can remain in the body for days. Someone who smokes a joint today can still show positive on a drug test three weeks from now, he said.
"Is it a safe drug? No way. Will it kill you if you use it one time. No, it won't," Balmer said. "But will it create birth defects three generations from now, if you use it all the time? Who knows?"