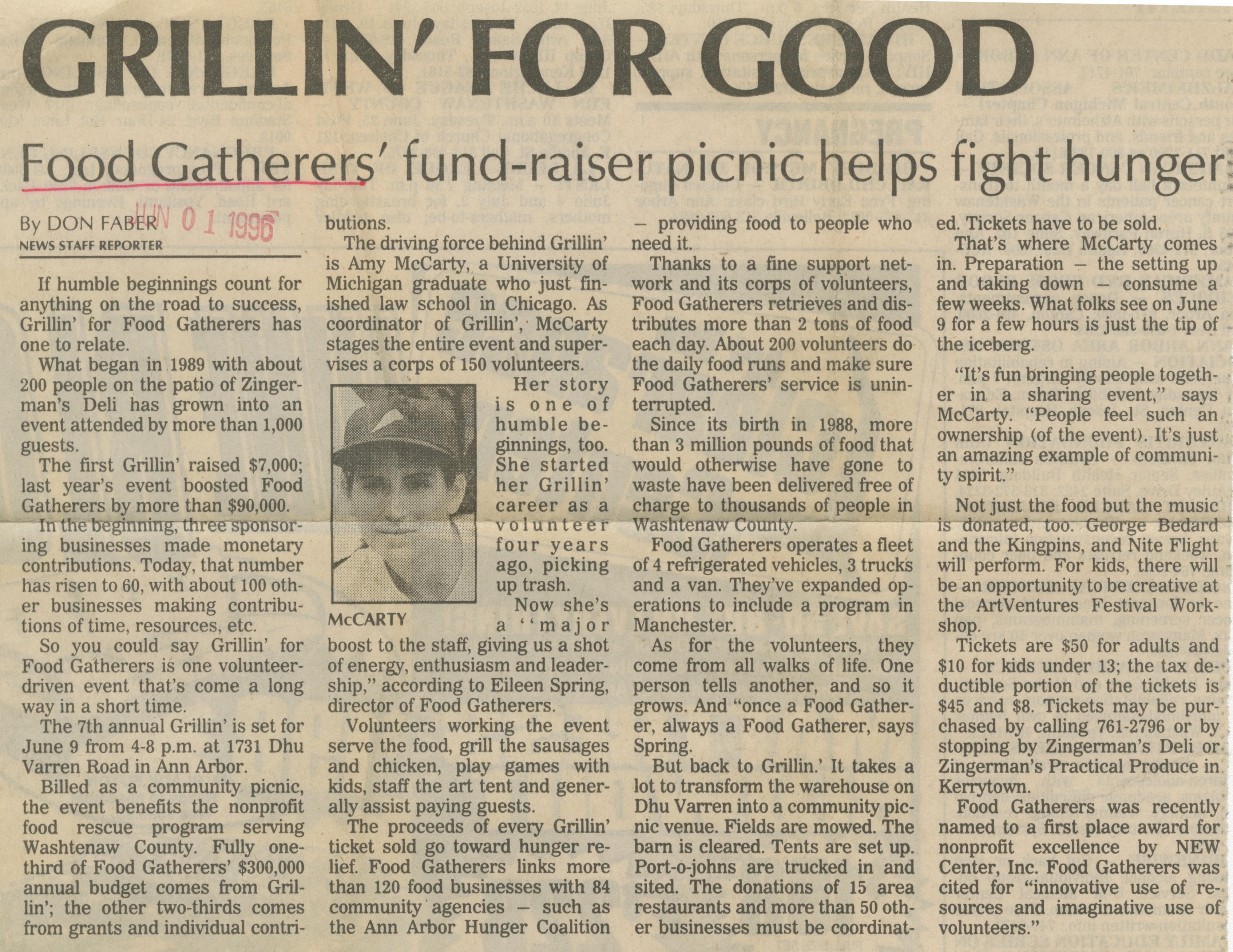 If humble beginnings count for anything on the road to success, Grillin’ for Food Gatherers has one to relate.

What began in 1989 with about 200 people on the patio of Zingerman’s Deli has grown into an event attended by more than 1,000 guests.

So you could say Grillin’ for Food Gatherers is one volunteer-driven event that’s come a long way in a short time.

The driving force behind Grillin’ is Amy McCarty, a University of Michigan graduate who just finished law school in Chicago. As coordinator of Grillin', McCarty stages the entire event and supervises a corps of 150 volunteers.

Her story is one of humble beginnings, too. She started her Grillin’ career as a voIunteer four years ago, picking up trash.

Now she’s a "major boost to the staff, giving us a shot of energy, enthusiasm and leadership,” according to Eileen Spring, director of Food Gatherers.

The proceeds of every Grillin’ ticket sold go toward hunger relief. Food Gatherers links more than 120 food businesses with 84 community agencies - such as the Ann Arbor Hunger Coalition - providing food to people who need it.

Thanks to a fine support network and its corps of volunteers, Food Gatherers retrieves and distributes more than 2 tons of food each day. About 200 volunteers do the daily food runs and make sure Food Gatherers’ service is uninterrupted.

Since its birth in 1988, more than 3 million pounds of food that would otherwise have gone to waste have been delivered free of charge to thousands of people in Washtenaw County.

Food Gatherers operates a fleet of 4 refrigerated vehicles, 3 trucks and a van. They’ve expanded operations to include a program in Manchester.

But back to Grillin.’ It takes a lot to transform the warehouse on Dhu Varren into a community picnic venue. Fields are mowed. The barn is cleared. Tents are set up. Port-o-johns are trucked in and sited. The donations of 15 area restaurants and more than 50 other businesses must be coordinated. Tickets have to be sold.

That’s where McCarty comes in. Preparation - the setting up and taking down - consume a few weeks. What folks see on June 9 for a few hours is just the tip of the iceberg.

“It’s fun bringing people together in a sharing event,” says McCarty. “People feel such an ownership (of the event). It’s just an amazing example of community spirit.”

Not just the food but the music is donated too: George Bedard and the Kingpins, and Nite Flight will perform. For kids, there will be an opportunity to be creative at the ArtVentures Festival Workshop.

Tickets are $50 for adults and $10 for kids under 13; the tax deductible portion of the tickets is $45 and $8. Tickets may be purchased by calling 761-2796 or by stopping by Zingerman’s Deli or Zingerman’s Practical Produce in Kerrytown.