2 from firm among 5 killed in crash 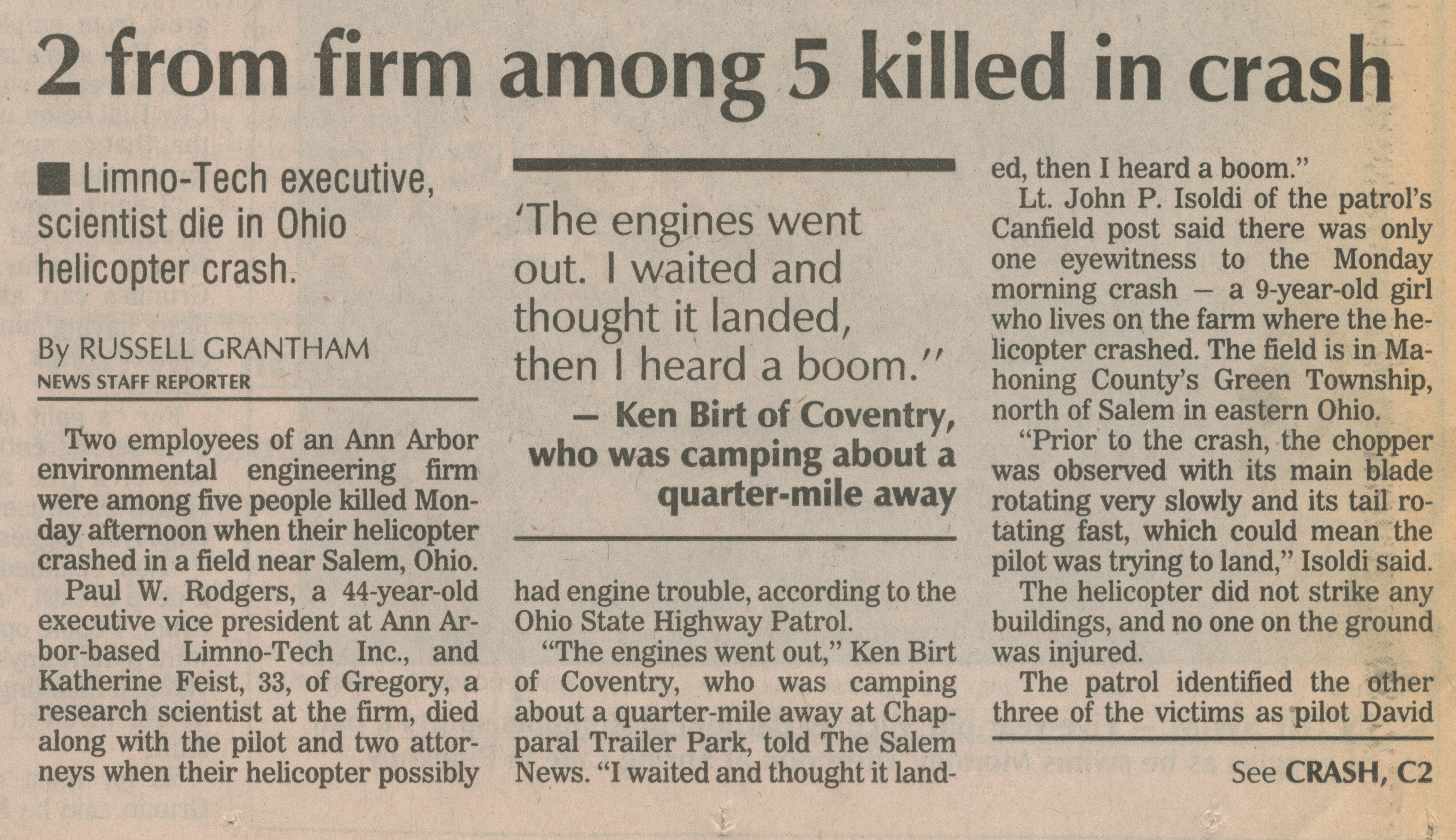 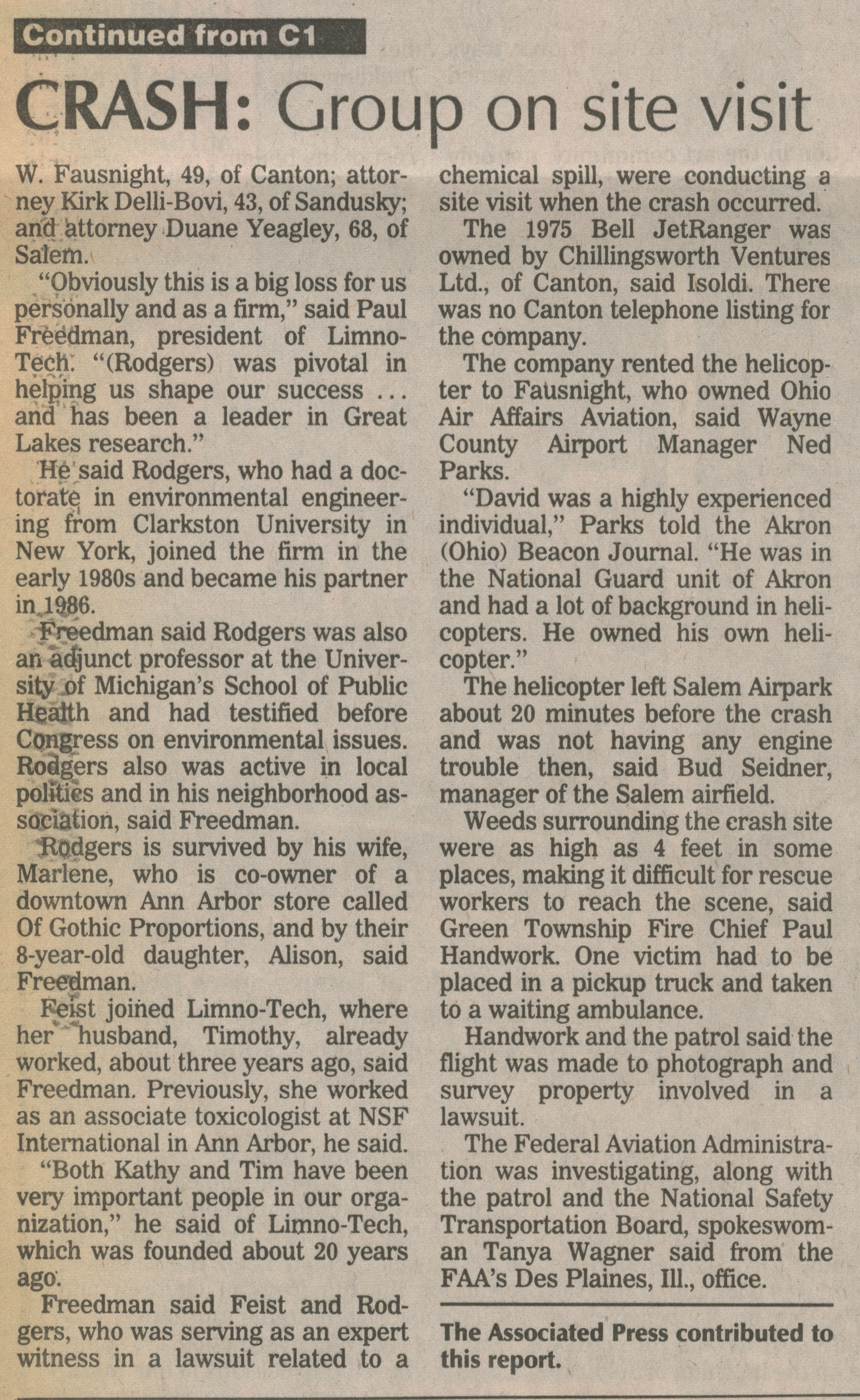 2 from firm among 5 killed in crash Limno-Tech executive, scientist die in Ohio helicopter crash. By RUSSELL GRANTHAM NEWS STAFF REPORTER Two employees of an Ann Arbor environmental engineering firm were among five people killed Monday afternoon when their helicopter crashed in a field near Salem, Ohio. Paul W. Rodgers, a 44-year-old executive vice president at Ann Arbor-based Limno-Tech Inc., and Katherine Feist, 33, of Gregory, a research scientist at the firm, died along with the pilot and two attorneys when their helicopter possibly had engine trouble, according to the Ohio State Highway Patrol. "The engines went out," Ken Birt of Coventry, who was camping about a quarter-mile away at Chapparal Trailer Park, told The Salem News. "I waited and thought it landed, then I heard a boom." Lt. John P. Isoldi of the patrol's Canfield post said there was only one eyewitness to the Monday morning crash - a 9-year-old girl who lives on the farm where the helicopter crashed. The field is in Mahoning County's Green Township, north of Salem in eastern Ohio. "Prior to the crash, the chopper was observed with its main blade rotating very slowly and its tail rotating fast, which could mean the pilot was trying to land," Isoldi said. The helicopter did not strike any buildings, and no one on the ground was injured. The patrol identified the other three of the victims as pilot David W. Fausnight, 49, of Canton; attorney Kirk Delli-Bovi, 43, of Sandusky; and attorney Duane Yeagley, 68, of Salem. "Obviously this is a big loss for us personally and as a firm," said Paul Freedman, president of Limno-Tech. "(Rodgers) was pivotal in helping us shape our success...and has been a leader in Great Lakes research." He said Rodgers, who had a doctorate in environmental engineering from Clarkston University in New York, joined the firm in the early 1980s and became his partner in 1986. Freedman said Rodgers was also an adjunct professor at the University of Michigan's School of Public Health and had testified before Congress on environmental issues. Rodgers also was active in local politics and in his neighborhood association, said Freedman. Rodgers is survived by his wife, Marlene, who is co-owner of a downtown Ann Arbor store called Of Gothic Proportions, and by their 8-year-old daughter, Alison, said Freedman. Feist joined Limno-Tech, where her husband, Timothy, already worked, about three years ago, said Freedman. Previously, she worked as an associate toxicologist at NSF International in Ann Arbor, he said. "Both Kathy and Tim have been very important people in our organization," he said of Limno-Tech, which was founded about 20 years ago. Freedman said Feist and Rodgers, who was serving as an expert witness in a lawsuit related to a chemical spill, were conducting a site visit when the crash occurred. The 1975 Bell JetRanger was owned by Chillingsworth Ventures Ltd., of Canton, said Isoldi. There was no Canton telephone listing for the company. The company rented the helicopter to Fausnight, who owned Ohio Air Affairs Aviation, said Wayne County Airport Manager Ned Parks. "David was a highly experienced individual," Parks told the Akron (Ohio) Beacon Journal. "He was in the National Guard unit of Akron and had a lot of background in helicopters. He owned his own helicopter." The helicopter left Salem Airpark about 20 minutes before the crash and was not having any engine trouble then, said Bud Seidner, manager of the Salem airfield. Weeds surrounding the crash site were as high as 4 feet in some places, making it difficult for rescue workers to reach the scene, said Green Township Fire Chief Paul Handwork. One victim had to be placed in a pickup truck and taken to a waiting ambulance. Handwork and the patrol said the flight was made to photograph and survey property involved in a lawsuit. The Federal Aviation Administration was investigating, along with the patrol and the National Safety Transportation Board, spokeswoman Tanya Wagner said from the FAA's Des Plaines, Ill., office.