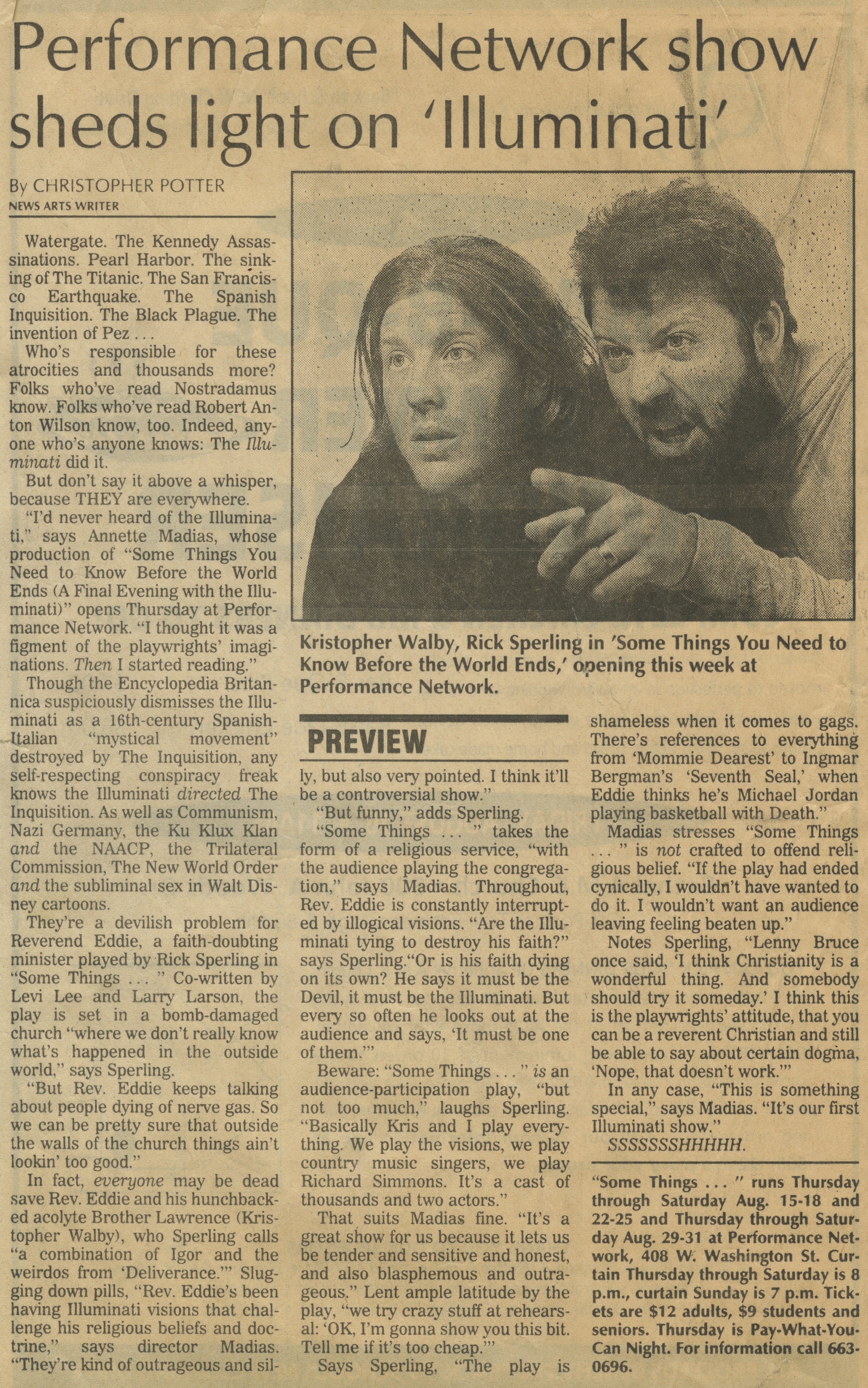 Watergate. The Kennedy Assassinations. Pearl Harbor. The sinking of The Titanic. The San Francisco Earthquake. The Spanish Inquisition. The Black Plague. The invention of Pez ...

But don’t say it above a whisper, because THEY are everywhere.

“I’d never heard of the Illuminati," says Annette Madias, whose production of “Some Things You Need to Know Before the World Ends (A Final Evening with the Illuminati)" opens Thursday at Performance Network. “I thought it was a figment of the playwrights’ imaginations. Then I started reading.”

Though the Encyclopedia Britan-nica suspiciously dismisses the Illuminati as a 16th-century Spanish-Italian “mystical movement” destroyed by The Inquisition, any self-respecting conspiracy freak knows the Illuminati directed The Inquisition. As well as Communism, Nazi Germany, the Ku Klux Klan and the NAACP, the Trilateral Commission, The New World Order and the subliminal sex in Walt Disney cartoons.

They’re a devilish problem for Reverend Eddie, a faith-doubting minister played by Rick Sperling in “Some Things ...” Co-written by Levi Lee and Larry Larson, the play is set in a bomb-damaged church "where we don’t really know what’s happened in the outside world." says Sperling.

“But Rev. Eddie keeps talking about people dying of nerve gas. So we can be pretty sure that outside the walls of the church things ain't lookin’ too good.”

In fact, everyone may be dead save Rev. Eddie and his hunchbacked acolyte Brother Lawrence (Kristopher Walby), who Sperling calls "a combination of Igor and the weirdos from ‘Deliverance.’” Slugging down pills, “Rev. Eddie’s been having Illuminati visions that challenge his religious beliefs and doctrine,” says director Madias. "They’re kind of outrageous and sil-

ly, but also very pointed. I think it’ll be a controversial show.”

"But funny,” adds Sperling. "Some Things ... ” takes the form of a religious service, “with the audience playing the congregation,” says Madias. Throughout, Rev. Eddie is constantly interrupted by illogical visions. “Are the Illuminati tying to destroy his faith?" says Sperling.“Or is his faith dying on its own? He says it must be the Devil, it must be the Illuminati. But every so often he looks out at the audience and says, ‘It must be one of them."’

Beware: “Some Things ..." is an audience-participation play, "but not too much,” laughs Sperling. “Basically Kris and I play everything. We play the visions, we play country music singers, we play Richard Simmons. It’s a cast of thousands and two actors.”

That suits Madias fine. “It’s a great show for us because it lets us be tender and sensitive and honest, and also blasphemous and outrageous." Lent ample latitude by the play, "we try crazy stuff at rehearsal: ‘OK, I’m gonna show you this bit. Tell me if it’s too cheap. ”

Says Sperling, “The play is

shameless when it comes to gags. There’s references to everything from ‘Mommie Dearest’ to Ingmar Bergman’s ‘Seventh Seal,’ when Eddie thinks he’s Michael Jordan playing basketball with Death."

Madias stresses “Some Things ...” is not crafted to offend religious belief. “If the play had ended cynically, I wouldn’t have wanted to do it. I wouldn’t want an audience leaving feeling beaten up.”

Notes Sperling, “Lenny Bruce once said, ‘I think Christianity is a wonderful thing. And somebody should try it someday.’ I think this is the playwrights’ attitude, that you can be a reverent Christian and still be able to say about certain dogma, ‘Nope, that doesn’t work.’”

In any case, “This is something special,” says Madias. “It’s our first Illuminati show.”