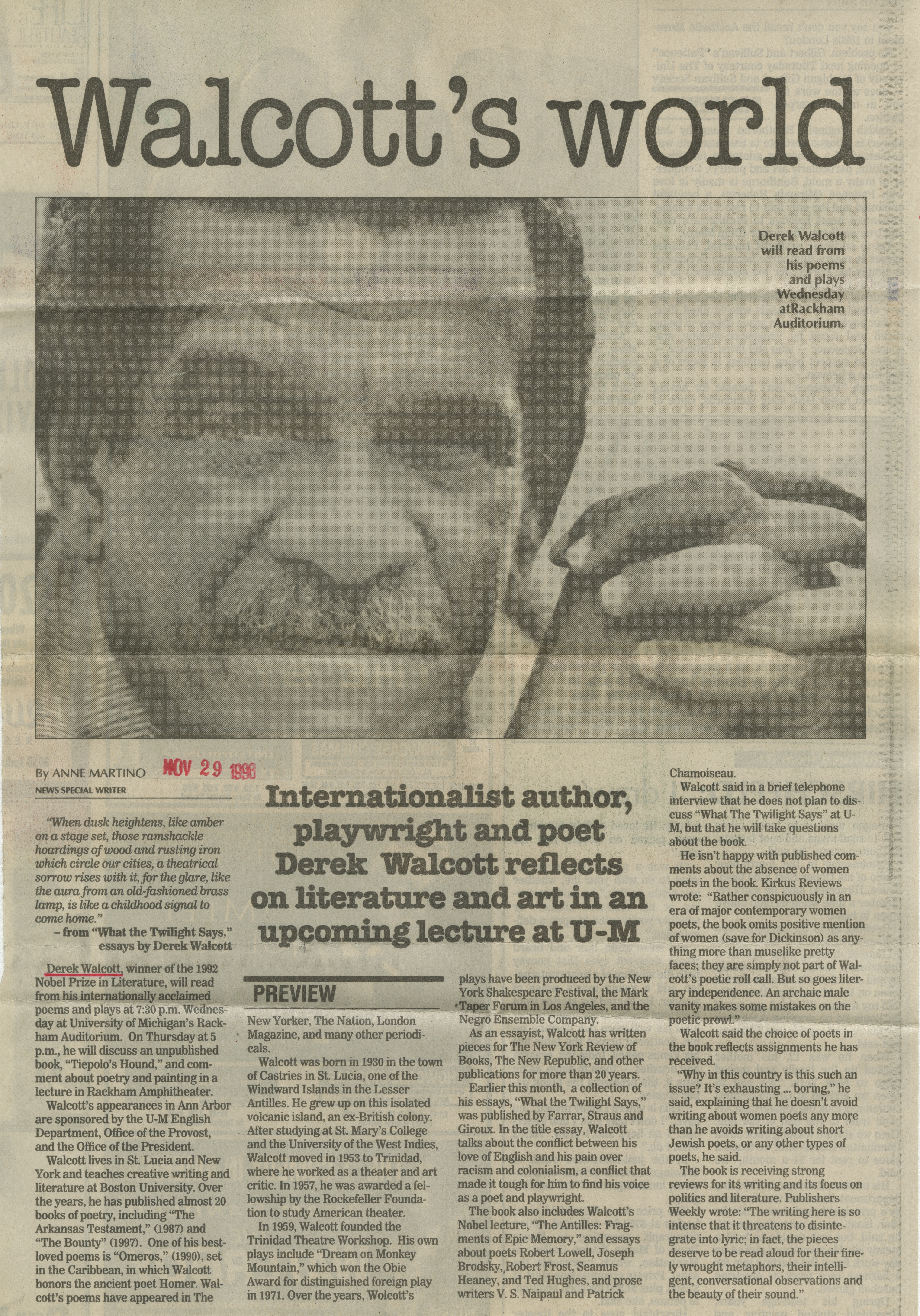 “When dusk heightens, like amber on a stage set, those ramshackle hoardings of wood and rusting iron which circle our cities, a theatrical sorrow rises with it, for the glare, like the aura from an old-fashioned brass lamp, is like a childhood signal to come home "

from “What the Twilight Says,” essays by Derek Walcott

Internationalist author, playwright and poet Derek Walcott reflects on literature and art in an upcoming lecture at U-M

Derek Walcott, winner of the 1992 Nobel Prize in Literature, will read from his internationally acclaimed

poems and plays at 7:30 p.m. Wednesday at University of Michigan’s Rack-ham Auditorium. On Thursday at 5 p.m., he will discuss an unpublished book, “Tiepolo’s Hound,” and comment about poetry and painting in a lecture in Rackham Amphitheater.

Walcott lives in St. Lucia and New York and teaches creative writing and literature at Boston University. Over the years, he has published almost 20 books of poetry, including “The Arkansas Testament,” (1987) and “The Bounty” (1997). One of his best loved poems is “Omeros,” (1990), set in the Caribbean, in which Walcott honors the ancient poet Homer. Walcott’s poems have appeared in The

New Yorker, The Nation, London Magazine, and many other periodicals.

Walcott was born in 1930 in the town of Castries in St. Lucia, one of the Windward Islands in the Lesser Antilles. He grew up on this isolated volcanic island, an ex-British colony. After studying at St. Mary’s College and the University of the West Indies, Walcott moved in 1953 to Trinidad, where he worked as a theater and art critic. In 1957, he was awarded a fellowship by the Rockefeller Foundation to study American theater.

In 1959, Walcott founded the Trinidad Theatre Workshop. His own plays include “Dream on Monkey Mountain,” which won the Obie Award for distinguished foreign play in 1971. Over the years, Wolcott’s

plays have been produced by the New York Shakespeare Festival, the Mark •Taper Forum in Los Angeles, and the

As an essayist, Walcott has written pieces for The New York Review of Books, The New Republic, and other publications for more than 20 years.

Earlier this month, a collection of his essays, “What the Twilight Says,” was published by Farrar, Straus and Giroux. In the title essay, Walcott talks about the conflict between his love of English and his pain over racism and colonialism, a conflict that made it tough for him to find his voice as a poet and playwright.

Walcott said in a brief telephone interview that he does not plan to discuss “What The Twilight Says” at U-M, but that he will take questions about the book.

He isn’t happy with published comments about the absence of women poets in the book. Kirkus Reviews wrote: “Rather conspicuously in an era of major contemporary women poets, the book omits positive mention of women (save for Dickinson) as anything more than muselike pretty faces; they are simply not part of Walcott’s poetic roll call. But so goes literary independence. An archaic male vanity makes some mistakes on the poetic prowl.”

Walcott said the choice of poets in the book reflects assignments he has received.

“Why in this country is this such an issue? It’s exhausting... boring,” he said, explaining that he doesn’t avoid writing about women poets any more than he avoids writing about short Jewish poets, or any other types of poets, he said.

The book is receiving strong reviews for its writing and its focus on politics and literature. Publishers Weekly wrote: “The writing here is so intense that it threatens to disintegrate into lyric; in fact, the pieces deserve to be read aloud for their finely wrought metaphors, their intelligent, conversational observations and the beauty of their sound.”