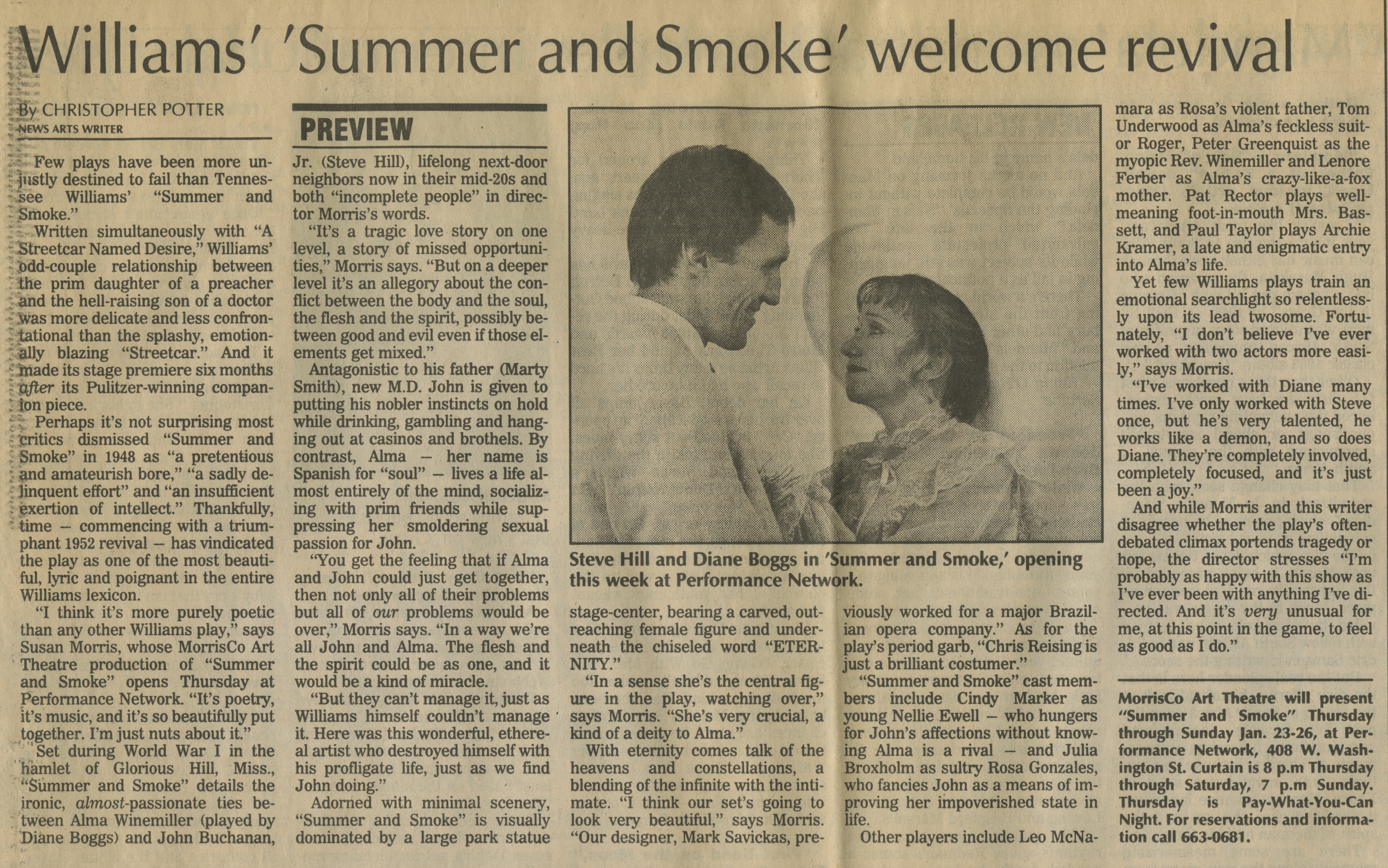 Steve Hill and Diane Boggs in 'Summer and Smoke,' opening this week at Performance Network.

Few plays have been more un-; justly destined to fail than Tennes-• see Williams’ “Summer and

Written simultaneously with “A Streetcar Named Desire,” Williams’ odd-couple relationship between the prim daughter of a preacher and the hell-raising son of a doctor was more delicate and less confrontational than the splashy, emotionally blazing “Streetcar.” And it made its stage premiere sue months after its Pulitzer-winning companion piece.

Perhaps it’s not surprising most Critics dismissed “Summer and Smoke” in 1948 as “a pretentious and amateurish bore,” “a sadly delinquent effort” and “an insufficient exertion of intellect.” Thankfully, time commencing with a triumphant 1952 revival - has vindicated the play as one of the most beautiful, lyric and poignant in the entire Williams lexicon.

“I think it’s more purely poetic than any other Williams play,” says Susan Morris, whose MorrisCo Art Theatre production of “Summer and Smoke” opens Thursday at Performance Network. “It’s poetry, it’s music, and it’s so beautifully put together. I’m just nuts about it.”

Set during World War I in the hamlet of Glorious Hill, Miss., “Summer and Smoke” details the ironic, almost-passionate ties between Alma Winemiller (played by Diane Boggs) and John Buchanan,

“It’s a tragic love story on one level, a story of missed opportunities,” Morris says. “But on a deeper level it’s an allegory about the conflict between the body and the soul, the flesh and the spirit, possibly between good and evil even if those elements get mixed.”

Antagonistic to his father (Marty Smith), new M.D. John is given to putting his nobler instincts on hold while drinking, gambling and hanging out at casinos and brothels. By contrast, Alma - her name is Spanish for “soul” - lives a life almost entirely of the mind, socializing with prim friends while suppressing her smoldering sexual passion for John.

“You get the feeling that if Alma and John could just get together, then not only all of their problems but all of our problems would be over,” Morris says. “In a way we’re all John and Alma. The flesh and the spirit could be as one, and it would be a kind of miracle.

“But they can’t manage it, just as Williams himself couldn’t manage it. Here was this wonderful, ethereal artist who destroyed himself with his profligate life, just as we find John doing.”

Adorned with minimal scenery, “Summer and Smoke” is visually dominated by a large park statue

stage-center, bearing a carved, out-reaching female figure and underneath the chiseled word “ETERNITY.”

“In a sense she’s the central figure in the play, watching over,” says Morris. “She’s very crucial, a kind of a deity to Alma.”

With eternity comes talk of the heavens and constellations, a blending of the infinite with the intimate. “I think our set’s going to look very beautiful,” says Morris. “Our designer, Mark Savickas, previously worked for a major Brazilian opera company." As for the play’s period garb, “Chris Reising is just a brilliant costumer.”

“Summer and Smoke” cast members include Cindy Marker as young Nellie Ewell - who hungers for John’s affections without knowing Alma is a rival - and Julia Broxholm as sultry Rosa Gonzales, who fancies John as a means of improving her impoverished state in life.

“I’ve worked with Diane many times. I’ve only worked with Steve once, but he’s very talented, he works like a demon, and so does Diane. They’re completely involved, completely focused, and it’s just been a joy.”

And while Morris and this writer disagree whether the play’s often-debated climax portends tragedy or hope, the director stresses “I’m probably as happy with this show as I’ve ever been with anything I’ve directed. And it’s very unusual for me, at this point in the game, to feel as good as I do.”