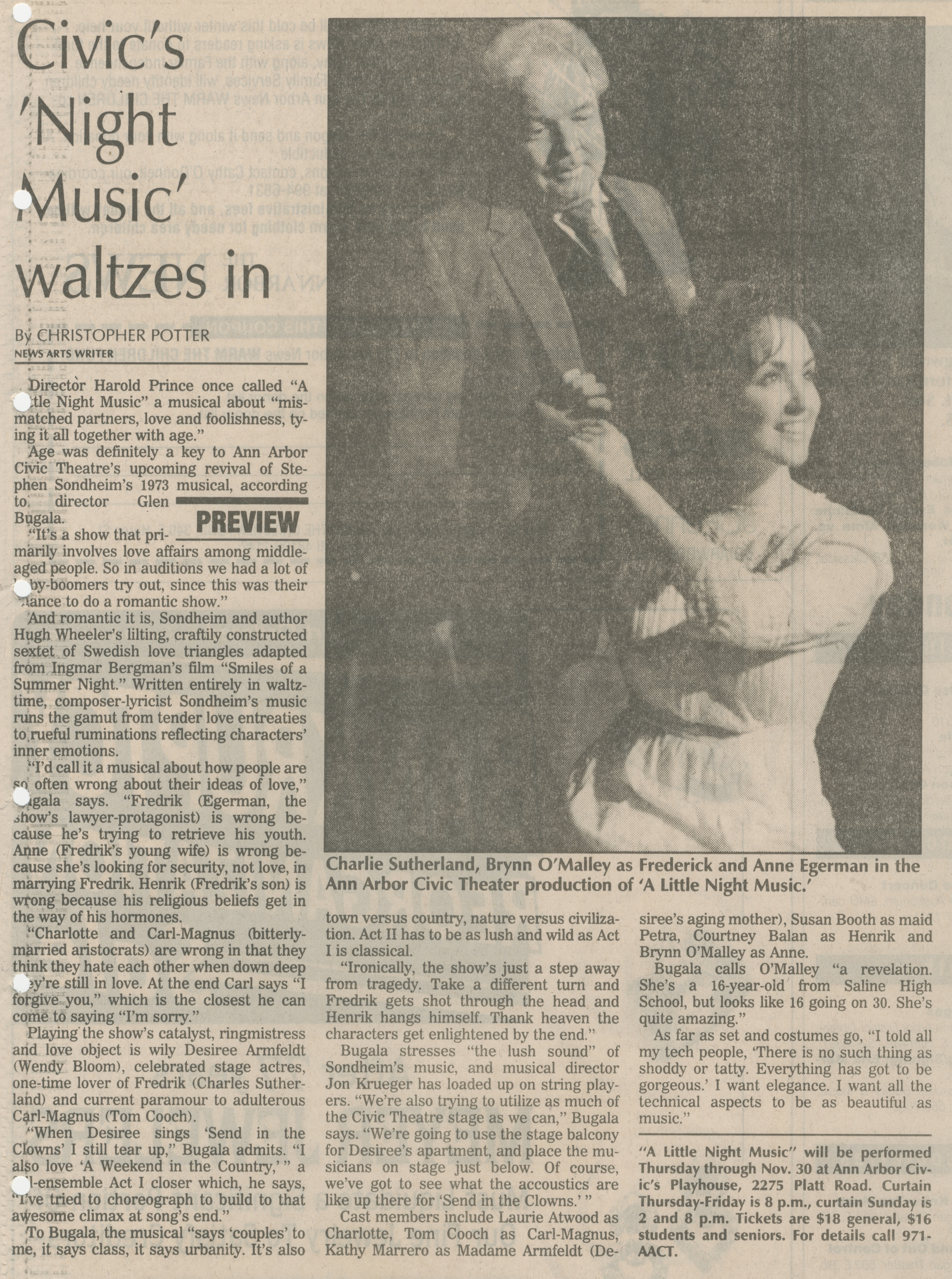 Director Harold Prince once called “A little Night Music” a musical about “mismatched partners, love and foolishness, tying it all together with age.”

“It’s a show that primarily involves love affairs among middle-aged people. So in auditions we had a lot of baby-boomers try out, since this was their chance to do a romantic show.”

‘‘I’d call it a musical about how people are so often wrong about their ideas of love,” Bugala says. “Fredrik (Egerman, the .show’s lawyer-protagonist) is wrong because he’s trying to retrieve his youth. Anne (Fredrik’s young wife) is wrong because she’s looking for security, not love, in marrying Fredrik. Henrik (Fredrik’s son) is wrong because his religious beliefs get in the way of his hormones.

“Charlotte and Carl-Magnus (bitterly-married aristocrats) are wrong in that they think they hate each other when down deep they're still in love. At the end Carl says “I forgive you,” which is the closest he can come to saying “I’m sorry.”

“When Desiree sings ‘Send in the Clowns’ I still tear up,” Bugala admits. “I also love ‘A Weekend in the Country,’ ” a full-ensemble Act I closer which, he says, “live tried to choreograph to build to that awesome climax at song’s end.”

To Bugala, the musical “says ‘couples’ to me, it says class, it says urbanity. It’s also town versus country, nature versus civilization. Act II has to be as lush and wild as Act I is classical.

“Ironically, the show’s just a step away from tragedy. Take a different turn and Fredrik gets shot through the head and Henrik hangs himself. Thank heaven the characters get enlightened by the end."

Bugala stresses "the lush sound” of Sondheim’s music, and musical director Jon Krueger has loaded up on string players. “We’re also trying to utilize as much of the Civic Theatre stage as we can,” Bugala says. “We’re going to use the stage balcony for Desiree’s apartment, and place the musicians on stage just below. Of course, we’ve got to see what the accoustics are like up there for ‘Send in the Clowns.’ ”

Bugala calls O'Malley “a revelation. She’s a 16-year-old from Saline High School, but looks like 16 going on 30. She’s quite amazing.”

As far as set and costumes go, “1 told all my tech people, ‘There is no such thing as shoddy or tatty. Everything has got to be gorgeous.’ I want elegance. I want all the technical aspects to be as beautiful as music.”

"A Little Night Music" will be performed Thursday through Nov. 30 at Ann Arbor Civic's Playhouse, 2275 Platt Road. Curtain Thursday-Friday is 8 p.m., curtain Sunday is 2 and 8 p.m. Tickets are $18 general, $16 students and seniors. For details call 971-AACT.