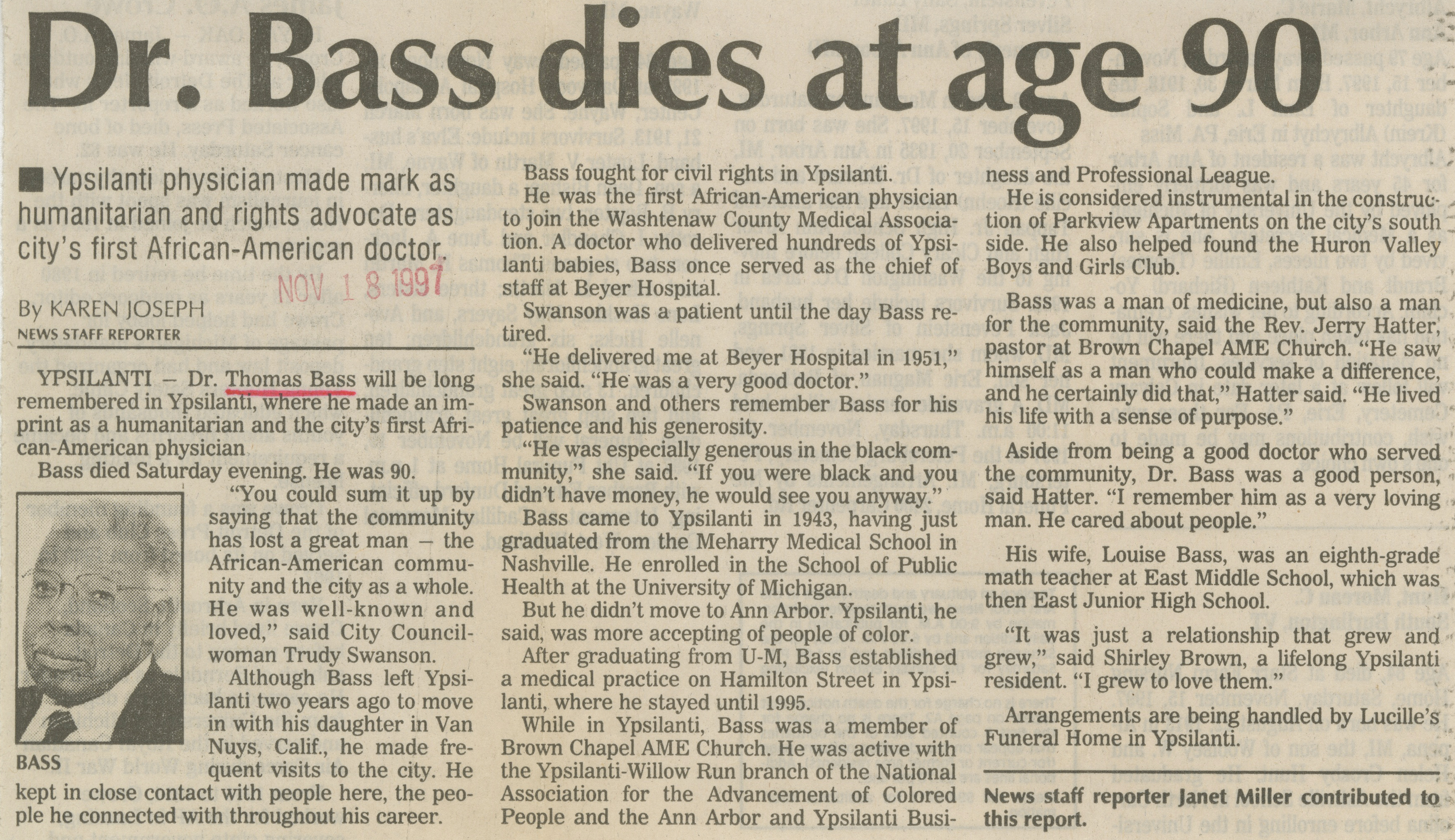 YPSILANTI - Dr. Thomas Bass will be long remembered in Ypsilanti, wnere ne made an imprint as a humanitarian and the city’s first African-American physician.

Bass died Saturday evening. He was 90.

“You could sum it up by saying that the community has lost a great man - the African-American community and the city as a whole. He was well-known and loved,” said City Council-woman Trudy Swanson.

Although Bass left Ypsilanti two years ago to move in with his daughter in Van Nuys, Calif., he made frequent visits to the city. He kept in close contact with people here, the people he connected with throughout his career.

He was the first African-American physician to join the Washtenaw County Medical Association. A doctor who delivered hundreds of Ypsilanti babies, Bass once served as the chief of staff at Beyer Hospital.

Swanson was a patient until the day Bass retired.

Swanson and others remember Bass for his patience and his generosity.

“He was especially generous in the black community,” she said. “If you were black and you didn’t have money, he would see you anyway.”

Bass came to Ypsilanti in 1943, having just graduated from the Meharry Medical School in Nashville. He enrolled in the School of Public Health at the University of Michigan.

But he didn’t move to Ann Arbor. Ypsilanti, he said, was more accepting of people of color.

After graduating from U-M, Bass established a medical practice on Hamilton Street in Ypsilanti, where he stayed until 1995.

While in Ypsilanti, Bass was a member of Brown Chapel AME Church. He was active with the Ypsilanti-Willow Run branch of the National Association for the Advancement of Colored People and the Ann Arbor and Ypsilanti Business and Professional League.

He is considered instrumental in the construction of Parkview Apartments on the city’s south side. He also helped found the Huron Valley Boys and Girls Club.

Bass was a man of medicine, but also a man for the community, said the Rev. Jerry Hatter, pastor at Brown Chapel AME Church. “He saw himself as a man who could make a difference, and he certainly did that,” Hatter said. “He lived his life with a sense of purpose.”

Aside from being a good doctor who served the community, Dr. Bass was a good person, said Hatter. “I remember him as a very loving man. He cared about people.”

His wife, Louise Bass, was an eighth-grade math teacher at East Middle School, which was then East Junior High School.

“It was just a relationship that grew and grew,” said Shirley Brown, a lifelong Ypsilanti resident. “I grew to love them.”

Arrangements are being handled by Lucille’s Funeral Home in Ypsilanti.