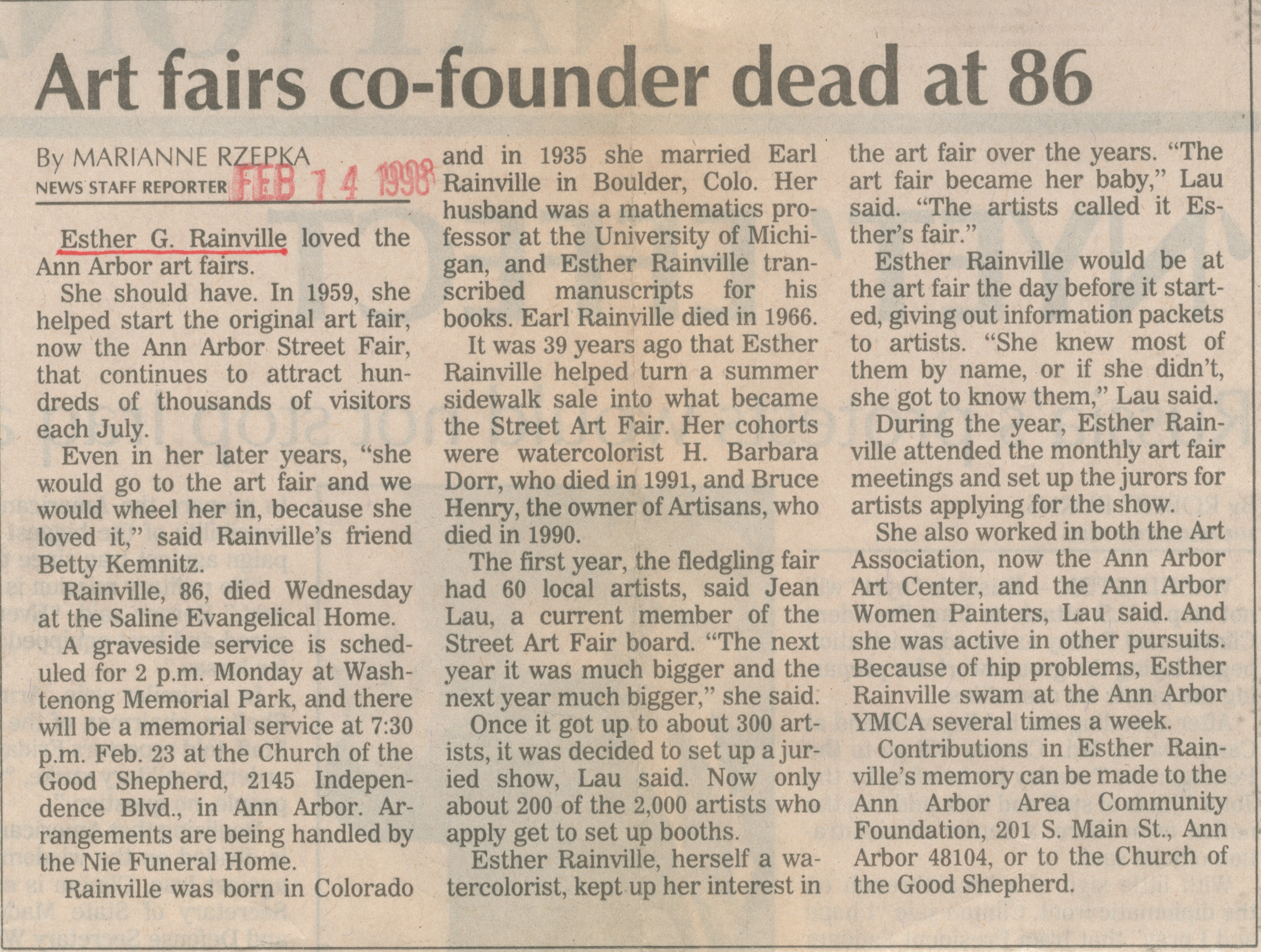 Esther G. Rainville loved the Ann Arbor art fairs.
She should have. In 1959, she helped start the original art fair, now the Ann Arbor Street Fair, that continues to attract hundreds of thousands of visitors each July.
Even in her later years, "she would go to the art fair and we would wheel her in, because she loved it," said Rainville's friend Betty Kemnitz.
Rainville, 86, died Wednesday at the Saline Evangelical Home.
A graveside service is scheduled for 2 p.m. Monday at Washtenong Memorial Park, and there will be a memorial service at 7:30 p.m. Feb. 23 at the Church of the Good Shepherd, 2145 Independence Blvd., in Ann Arbor. Arrangements are being handled by the Nie Funeral Home.
Rainville was born in Colorado and in 1935 she married Earl Rainville in Boulder, Colo. Her husband was a mathematics professor at the University of Michigan, and Esther Rainville transcribed manuscripts for his books. Earl Rainville died in 1966.
It was 39 years ago that Esther Rainville helped turn a summer sidewalk sale into what became the Street Art Fair. Her cohorts were watercolorist H. Barbara Dorr, who died in 1991, and Bruce Henry, the owner of Artisans, who died in 1990.
The first year, the fledging fair had 60 local artists, said Jean Lau, a current member of the Street Art Fair board. "The next year it was much bigger and the next year much bigger," she said.
Once it got up to about 300 artists, it was decided to set up a juried show, Lau said. Now only about 200 of the 2,000 artists who apply get to set up booths.
Esther Rainville, herself a watercolorist, kept up her interest in the art fair over the years. "The art fair became her baby," Lau said. "The artists called it Esther's fair."
Esther Rainville would be at the art fair the day before it started, giving out information packets to artists. "She knew most of them by name, or if she didn't, she got to know them," Lau said.
During the year, Esther Rainville attended the monthly art fair meetings and set up the jurors for artists applying for the show.
She also worked in both the Art Association, now the Ann Arbor Art Center, and the Ann Arbor Women Painters, Lau said. And she was active in other pursuits. Because of hip problems, Esther Rainville swam at the Ann Arbor YMCA several times a week.
Contributions in Esther Rainville's memory can be made to the Ann Arbor Area Community Foundation, 201 S. Main St., Ann Arbor 48104, or the the Church of the Good Shepherd.