Other Voices: Leave MYA School Where It Is 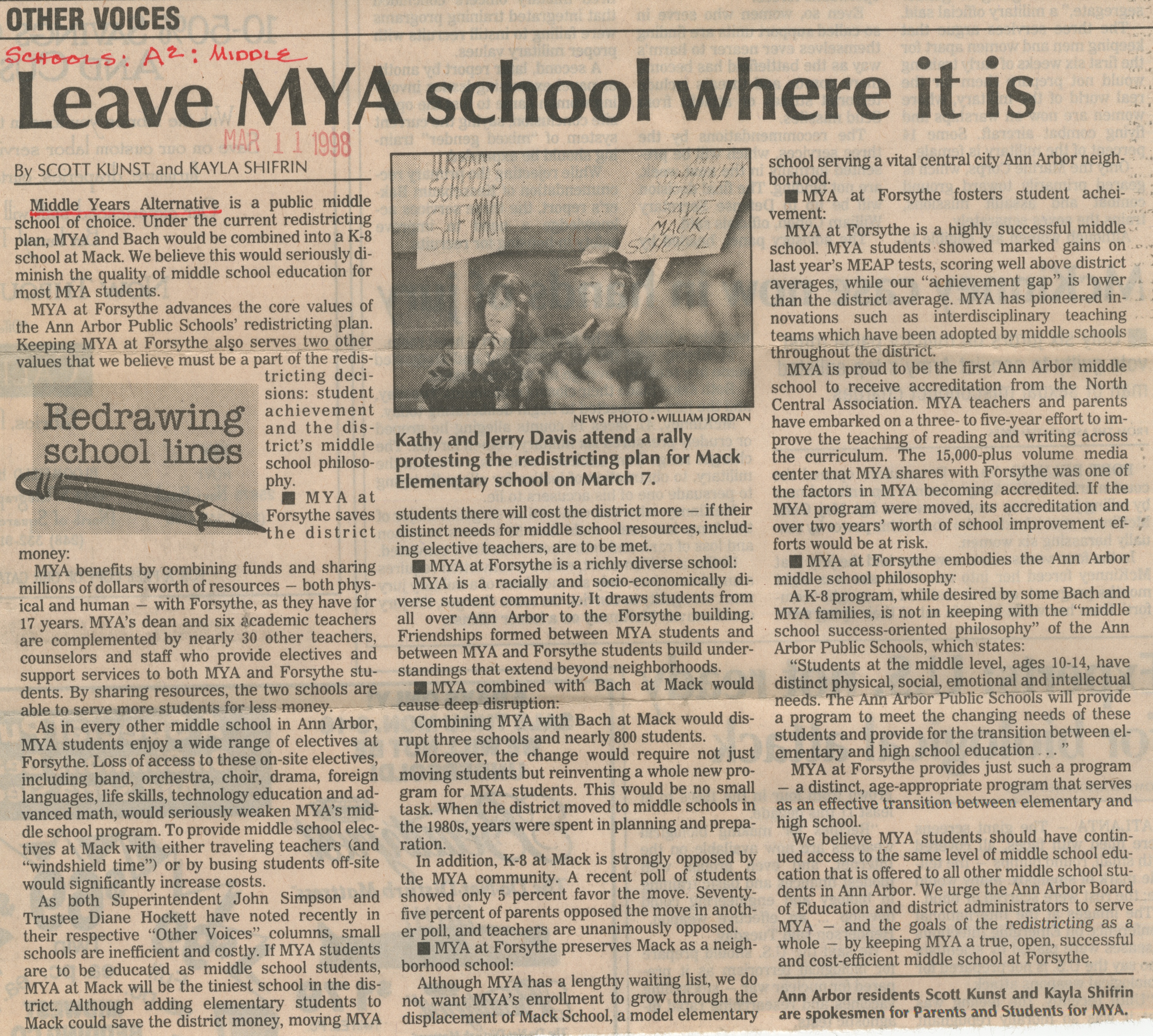 Leave MYA school where it is

By SCOTT KUNST and KAYLA SHIFRIN

Middle Years Alternative is a public middle school of choice. Under the current redistricting plan, MYA and Bach would be combined into a K-8 school at Mack. We believe this would seriously diminish the quality of middle school education for most MYA students.

MYA benefits by combining funds and sharing millions of dollars worth of resources - both physical and human - with Forsythe, as they have for 17 years. MYA’s dean and six academic teachers are complemented by nearly 30 other teachers, counselors and staff who provide electives and support services to both MYA and Forsythe students. By sharing resources, the two schools are able to serve more students for less money.

As in every other middle school in Ann Arbor, MYA students enjoy a wide range of electives at Forsythe. Loss of access to these on-site electives, including band, orchestra, choir, drama, foreign languages, life skills, technology education and advanced math, would seriously weaken MYA’s middle school program. To provide middle school electives at Mack with either traveling teachers (and “windshield time”) or by busing students off-site would significantly increase costs.

As both Superintendent John Simpson and Trustee Diane Hockett have noted recently in their respective “Other Voices” columns, small schools are inefficient and costly. If MYA students are to be educated as middle school students, MYA at Mack will be the tiniest school in the district. Although adding elementary students to Mack could save the district money, moving MYA

students there will cost the district more - if their distinct needs for middle school resources, including elective teachers, are to be met.

■ MYA at Forsythe is a richly diverse school:

MYA is a racially and socio-economically diverse student community. It draws students from all over Ann Arbor to the Forsythe building. Friendships formed between MYA students and between MYA and Forsythe students build understandings that extend beyond neighborhoods.

■ MYA combined with' Bach at Mack would cause deep disruption:

Combining MYA with Bach at Mack would disrupt three schools and nearly 800 students.

Moreover, the change would require not just moving students but reinventing a whole new program for MYA students. This would be no small task. When the district moved to middle schools in the 1980s, years were spent in planning and preparation.

In addition, K-8 at Mack is strongly opposed by the MYA community. A recent poll of students showed only 5 percent favor the move. Seventy-five percent of parents opposed the move in another poll, and teachers are unanimously opposed.

■ MYA at Forsythe preserves Mack as a neighborhood school:

Although MYA has a lengthy waiting list, we do not want MYA’s enrollment to grow through the displacement of Mack School, a model elementary

MYA is proud to be the first Ann Arbor middle school to receive accreditation from the North Central Association. MYA teachers and parents have embarked on a three- to five-year effort to improve the teaching of reading and writing across the curriculum. The 15,000-plus volume media center that MYA shares with Forsythe was one of the factors in MYA becoming accredited. If the MYA program were moved, its accreditation and over two years’ worth of school improvement efforts would be at risk.

A K-8 program, while desired by some Bach and MYA families, is not in keeping with the “middle school success-oriented philosophy” of the Ann Arbor Public Schools, which states:

“Students at the middle level, ages 10-14, have distinct physical, social, emotional and intellectual needs. The Ann Arbor Public Schools wifi provide a program to meet the changing needs of these students and provide for the transition between elementary and high school education ...”

MYA at Forsythe provides just such a program - a distinct, age-appropriate program that serves as an effective transition between elementary and high school.

We believe MYA students should have continued access to the same level of middle school education that is offered to all other middle school students in Ann Arbor. We urge the Ann Arbor Board of Education and district administrators to serve MYA - and the goals of the redistricting as a whole - by keeping MYA a true, open, successful and cost-efficient middle school at Forsythe.

Ann Arbor residents Scott Kunst and Kayla Shifrin are spokesmen for Parents and Students for MYA.