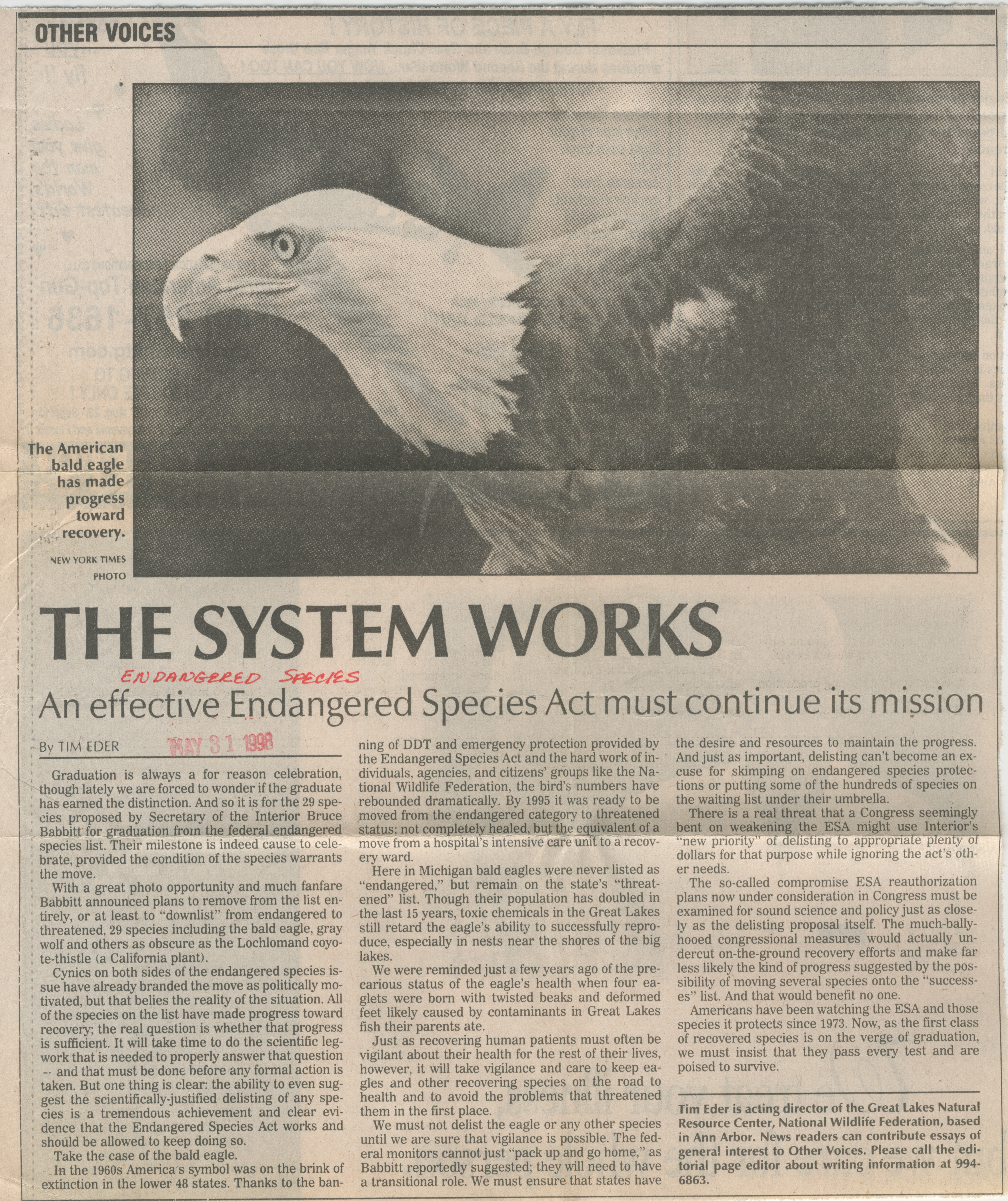 The American ; bald eagle has made progress toward recovery.

An effective Endangered Species Act must continue its mission

Graduation is always a for reason celebration, though lately we are forced to wonder if the graduate has earned the distinction. And so it is for the 29 species proposed by Secretary of the Interior Bruce Babbitt for graduation from the federal endangered species list. Their milestone is indeed cause to celebrate. provided the condition of the species warrants the move.

With a great photo opportunity and much fanfare Babbitt announced plans to remove from the list entirely, or at least to “downlist” from endangered to threatened, 29 species including the bald eagle, gray wolf and others as obscure as the Lochlomand coyote-thistle (a California plant).

Cynics on both sides of the endangered species issue have already branded the move as politically motivated, but that belies the reality of the situation. All of the species on the list have made progress toward recovery; the real question is whether that progress is sufficient. It will take time to do the scientific leg-work that is needed to properly answer that question -- and that must be done before any formal action is taken. But one thing is clear: the ability to even suggest the scientifically-justified delisting of any species is a tremendous achievement and clear evidence that the Endangered Species Act works and should be allowed to keep doing so.

Take the case of the bald eagle.

In the 1960s America s symbol was on the brink of extinction in the lower 48 states. Thanks to the banning of DDT and emergency protection provided by the Endangered Species Act and the hard work of individuals, agencies, and citizens’ groups like the National Wildlife Federation, the bird’s numbers have rebounded dramatically. By 1995 it was ready to be moved from the endangered category to threatened status; not completely healed, but the equivalent of a move from a hospital’s intensive care unit to a recovery ward.

Here in Michigan bald eagles were never listed as “endangered,” but remain on the state’s “threatened” list. Though their population has doubled in the last 15 years, toxic chemicals in the Great Lakes still retard the eagle’s ability to successfully reproduce, especially in nests near the shores of the big lakes.

We were reminded just a few years ago of the precarious status of the eagle’s health when four eaglets were born with twisted beaks and deformed feet likely caused by contaminants in Great Lakes fish their parents ate.

Just as recovering human patients must often be vigilant about their health for the rest of their lives, however, it will take vigilance and care to keep eagles and other recovering species on the road to health and to avoid the problems that threatened them in the first place.

We must not delist the eagle or any other species until we are sure that vigilance is possible. The federal monitors cannot just “pack up and go home,” as Babbitt reportedly suggested; they will need to have a transitional role. We must ensure that states have

the desire and resources to maintain the progress. And just as important, delisting can’t become an excuse for skimping on endangered species protections or putting some of the hundreds of species on the waiting list under their umbrella.

There is a real threat that a Congress seemingly bent on weakening the ESA might use Interior’s "new priority" of delisting to appropriate plenty of dollars for that purpose while ignoring the act's other needs.

The so-called compromise ESA reauthorization plans now under consideration in Congress must be examined for sound science and policy just as closely as the delisting proposal itself. The much-bally-hooed congressional measures would actually undercut on-the-ground recovery efforts and make far less likely the kind of progress suggested by the possibility of moving several species onto the “successes” list. And that would benefit no one.

Americans have been watching the ESA and those species it protects since 1973. Now, as the first class of recovered species is on the verge of graduation, we must insist that they pass every test and are poised to survive.

Tim Eder is acting director of the Great Lakes Natural Resource Center, National Wildlife Federation, based in Ann Arbor. News readers can contribute essays of genera! interest to Other Voices. Please call the editorial page editor about writing information at 994-6863.