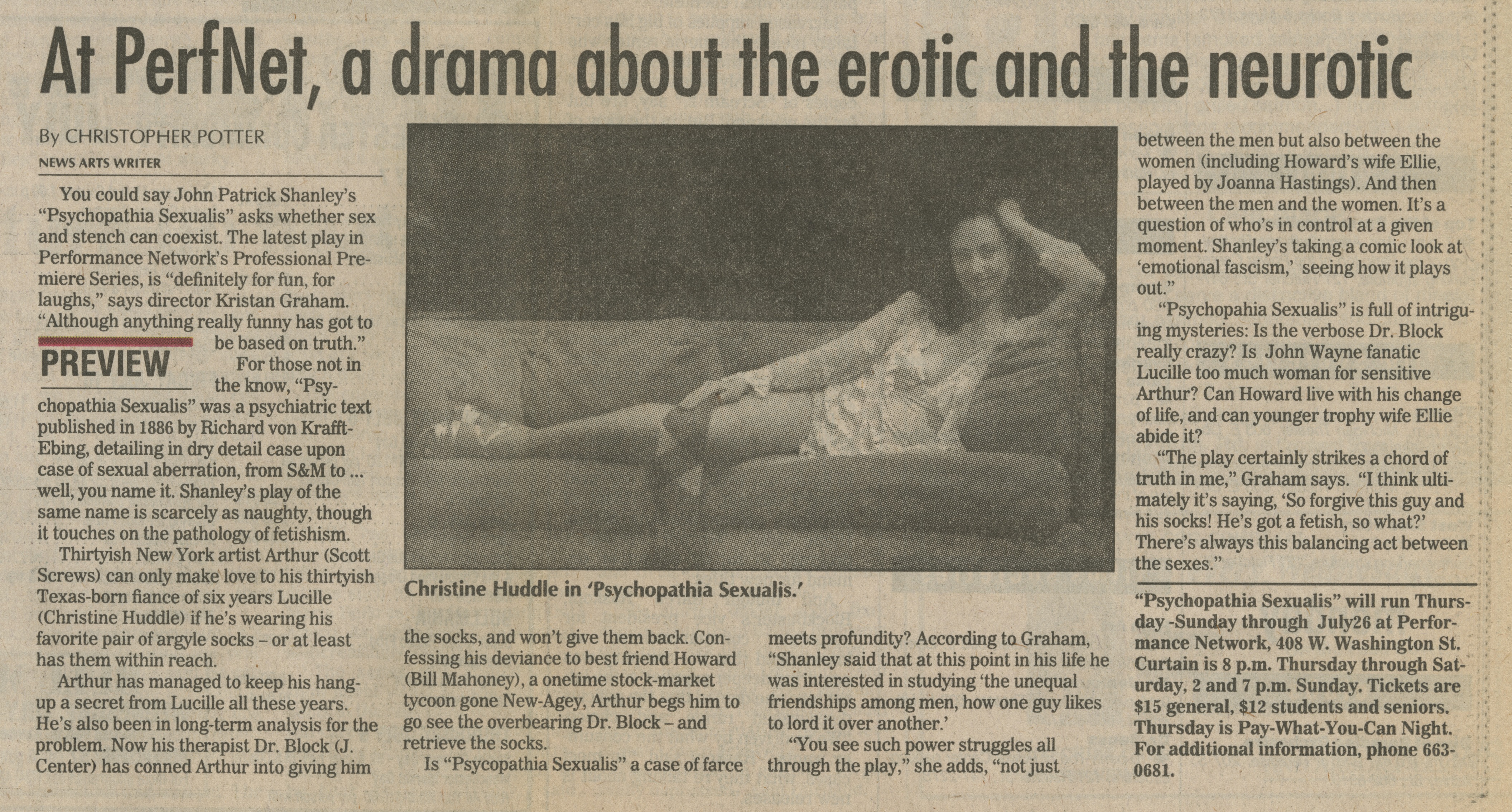 ﻿At PerfNet, a drama about the erotic and the neurotic<br><br>Christine Huddle in 'Psychopathia Sexualis.'<br><br>By CHRISTOPHER POTTER<br><br>NEWS ARTS WRITER ____<br><br>You could say John Patrick Shanley’s “Psychopathia Sexualis” asks whether sex and stench can coexist. The latest play in Performance Network's Professional Premiere Series, is “definitely for fun, for laughs,” says director Kristan Graham. “Although anything really funny has got to be based on truth.”<br><br>PREVIEW For those not in<br><br>----------------- the know, “Psychopathia Sexualis” was a psychiatric text published in 1886 by Richard von Krafft-Ebing, detailing in dry detail case upon case of sexual aberration, from S&M to ... well, you name it. Shanley’s play of the same name is scarcely as naughty, though it touches on the pathology of fetishism.<br><br>Thirtyish New York artist Arthur (Scott Screws) can only make love to his thirtyish Texas-born fiance of sue years Lucille (Christine Huddle) if he’s wearing his favorite pair of argyle socks - or at least has them within reach.<br><br>Arthur has managed to keep his hangup a secret from Lucille all these years. He's also been in long-term analysis for the problem. Now his therapist Dr. Block (J. Center) has conned Arthur into giving him<br><br>the socks, and won’t give them back. Confessing his deviance to best friend Howard (Bill Mahoney), a onetime stock-market tycoon gone New-Agey, Arthur begs him to go see the overbearing Dr. Block - and retrieve the socks.<br><br>Is “Psycopathia Sexualis” a case of farce<br><br>meets profundity? According to Graham, “Shanley said that at this point in his life he was interested in studying ‘the unequal friendships among men, how one guy likes to lord it over another.’<br><br>“You see such power struggles all through the play,” she adds, “not just<br><br>between the men but also between the women (including Howard’s wife Ellie, played by Joanna Hastings). And then between the men and the women. It’s a question of who’s in control at a given moment. Shanley’s taking a comic look at ‘emotional fascism,’ seeing how it plays out.”<br><br>“Psychopahia Sexualis" is full of intriguing mysteries: Is the verbose Dr. Block really crazy? Is John Wayne fanatic Lucille too much woman for sensitive Arthur? Can Howard live with his change of life, and can younger trophy wife Ellie abide it?<br><br>“The play certainly strikes a chord of truth in me,” Graham says. “I think ultimately it’s saying, ‘So forgive this guy and his socks! He’s got a fetish, so what?’ There’s always this balancing act between the sexes.”<br><br>“Psychopathia Sexualis” will run Thursday -Sunday through July26 at Performance Network, 408 W. Washington St. Curtain is 8 p.m. Thursday through Saturday, 2 and 7 p.m. Sunday. Tickets are $15 general, $12 students and seniors. Thursday is Pay-What-You-Can Night. For additional information, phone 663-0681.