Fight For Peace: Even Observes 53rd Anniversary Of Atomic Bombing 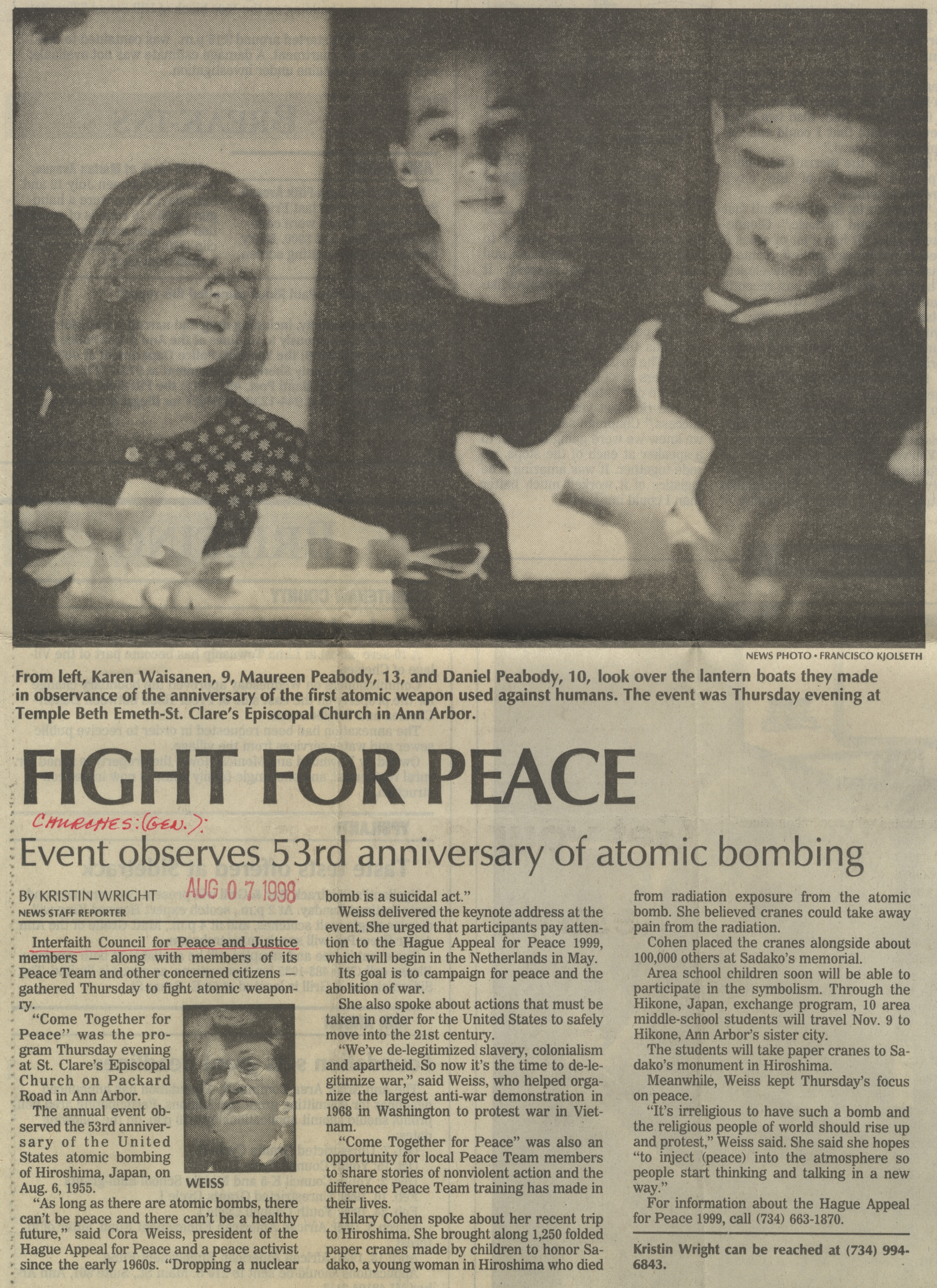 From left, Karen Waisanen, 9, Maureen Peabody, 13, and Daniel Peabody, 10, look over the lantern boats they made in observance of the anniversary of the first atomic weapon used against humans. The event was Thursday evening at Temple Beth Emeth-St. Clare's Episcopal Church in Ann Arbor.

Interfaith Council for Peace and Justice members - along with members of its Peace Team and other concerned citizens -gathered Thursday to fight atomic weaponry.

“Come Together for Peace” was the program Thursday evening at St. Clare’s Episcopal 1 Church on Packard Road in Ann Arbor.

The annual event observed the 53rd anniversary of the United States atomic bombing of Hiroshima, Japan, on : Aug. 6,1955.

“As long as there are atomic bombs, there can’t be peace and there can’t be a healthy future,” said Cora Weiss, president of the Hague Appeal for Peace and a peace activist - since the early 1960s. “Dropping a nuclear bomb is a suicidal act.”

Weiss delivered the keynote address at the event. She urged that participants pay attention to the Hague Appeal for Peace 1999, which will begin in the Netherlands in May.

Its goal is to campaign for peace and the abolition of war.

She also spoke about actions that must be taken in order for the United States to safely move into the 21st century.

“We’ve de-legitimized slavery, colonialism and apartheid. So now it’s the time to de-legitimize war,” said Weiss, who helped organize the largest anti-war demonstration in 1968 in Washington to protest war in Vietnam.

“Come Together for Peace” was also an opportunity for local Peace Team members to share stories of nonviolent action and the difference Peace Team training has made in their lives.

Hilary Cohen spoke about her recent trip to Hiroshima. She brought along 1,250 folded paper cranes made by children to honor Sadako, a young woman in Hiroshima who died from radiation exposure from the atomic bomb. She believed cranes could take away pain from the radiation.

Cohen placed the cranes alongside about 100,000 others at Sadako’s memorial.

Area school children soon will be able to participate in the symbolism. Through the Hikone, Japan, exchange program, 10 area middle-school students will travel Nov. 9 to Hikone, Ann Arbor’s sister city.

The students will take paper cranes to Sadako’s monument in Hiroshima.

"It’s irreligious to have such a bomb and the religious people of world should rise up and protest,” Weiss said. She said she hopes “to inject (peace) into the atmosphere so people start thinking and talking in a new way.”