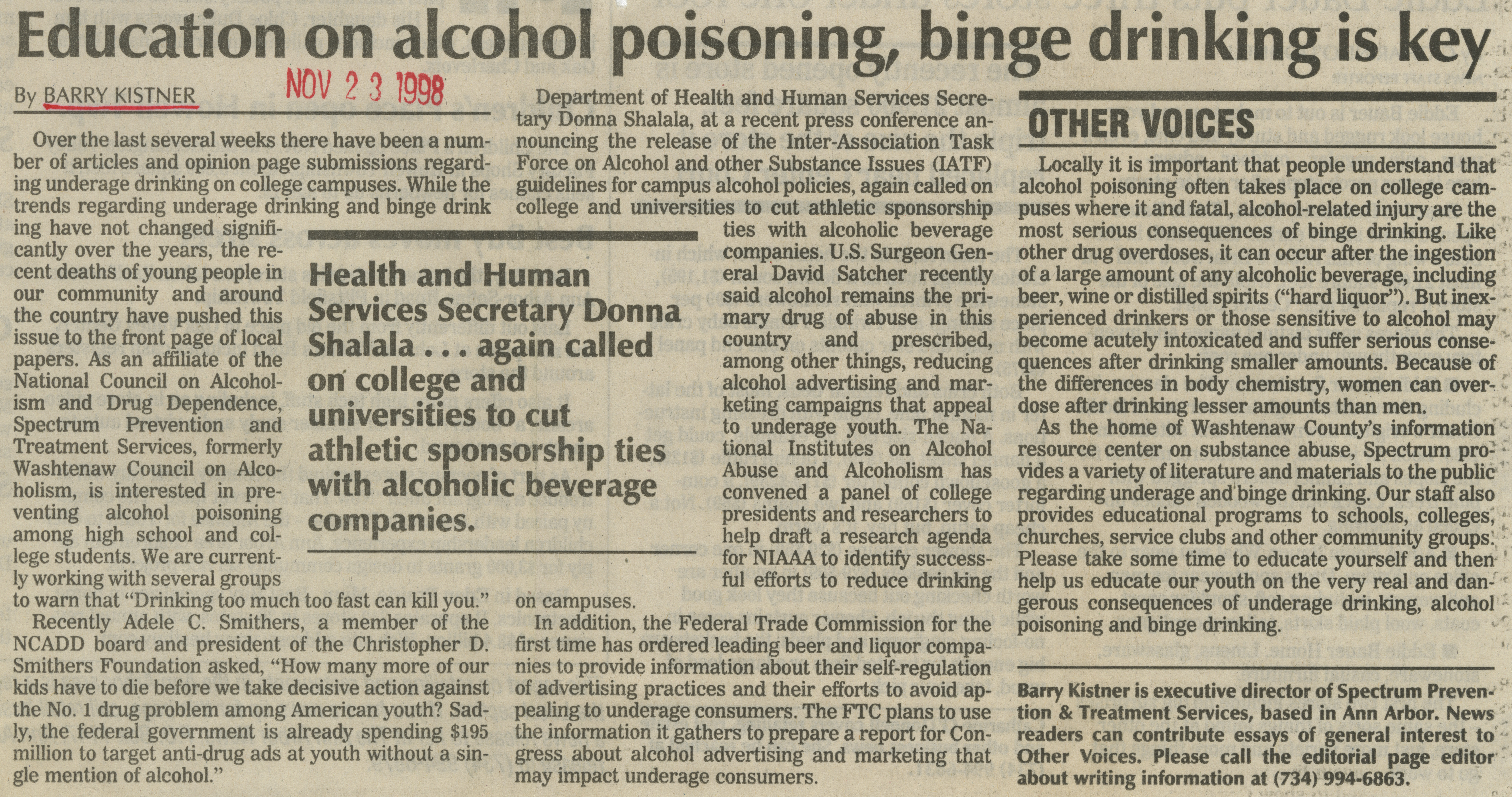 Over the last several weeks there have been number of articles and opinions pages submissions regarding underage drinking on college campuses. While the trends regarding underage drinking and binge drinking have not changed significantly over the years, the recent deaths of young people in our community and around the country have pushed this issue to the front page of local papers. As an affiliate of the National Council on Alcoholism and Drug Dependence, Spectrum Prevention and Treatment Services, formerly Washtenaw Council on Alcoholism, is interested in preventing alcohol poisoning among high school and college students. We are currently working with several groups to warn that "Drinking too much too fast can kill you."

Recently Adele C. Smithers, a member of the NCADD board and president of the Christopher D. Smithers Foundation asked, "How many more of our kids have to die before we take decisive action against the No. 1 drug problem among American youth? Sadly, the federal government is already spending $195 million to target anti-drug ads at youth without a single mention of alcohol."

Department of Heath and Human Services Secretary Donna Shalala, at a recent press conference announcing the release of the Inter-Association Task Force on Alcohol and other Substance Issues (IATF) guidelines for campus alcohol policies, again called on college and universities to cut athletic sponsorship ties with alcoholic beverage companies. U.S. Surgeon General David Satcher recently said alcohol remains  the primary drug of abuse in this country and prescribed, among other things, reducing alcohol advertising and marketing campaigns that appeal to under age youth. The National Institute on Alcohol Abuse and Alcoholism has convened a panel of college presidents and researchers to help draft a research agenda for NIAAA to identify successful efforts to reduce drinking on campuses.

In addition, the Federal Trade Commission for the first time has ordered leading beer and liquor companies to provide information about their self-regulation of advertising practices and and their efforts to avoid appealing to underage consumers. The FTC plans to use the information it gathers to prepare a report for Congress about alcohol advertising and marketing that may impact underage consumers.

Locally it is important that people understand alcohol poisoning often takes place on college campuses where it and fatal, alcohol-related injury are the most serious consequences of binge drinking. Like other drug overdoses, it can occur after the ingestion of a large amount of any alcoholic beverage including beer, wine, or distilled spirits (“hard liquor”). But inexperienced drinkers or those sensitive to alcohol may become acutely intoxicated and suffer serious consequences after drinking smaller amounts. Because of the differences and body chemistry, women can overdose after drinking lesser amounts  than men.

As the home of Washtenaw County’s Information resource center on substance abuse, Spectrum provides a variety of literature in materials to the public regarding underage and binge drinking. Our staff are supervised educational programs to schools, colleges, churches, service clubs and other community groups. Please take some time to educate yourself and then help us educate our youth on the very real and dangerous consequences of underage drinking, alcohol poisoning, and binge drinking.

Barry Kistner is executive director of Spectrum Prevention & Treatment Services, based in Ann Arbor. News readers can contribute essays of general interest to Other Voices. Please call the editorial page editor about writing information at (734) 994-6863.