All Eyes on Argus 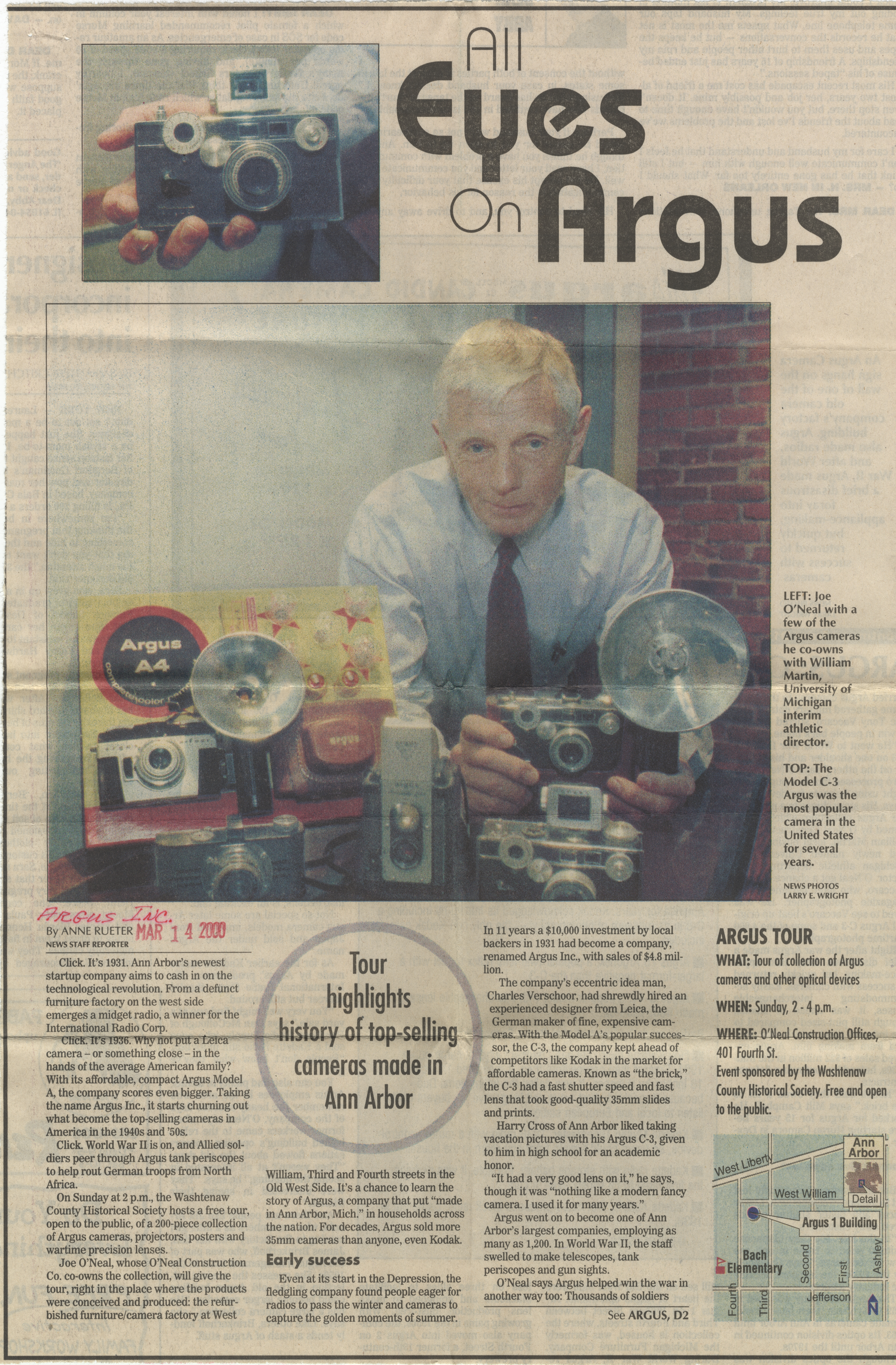 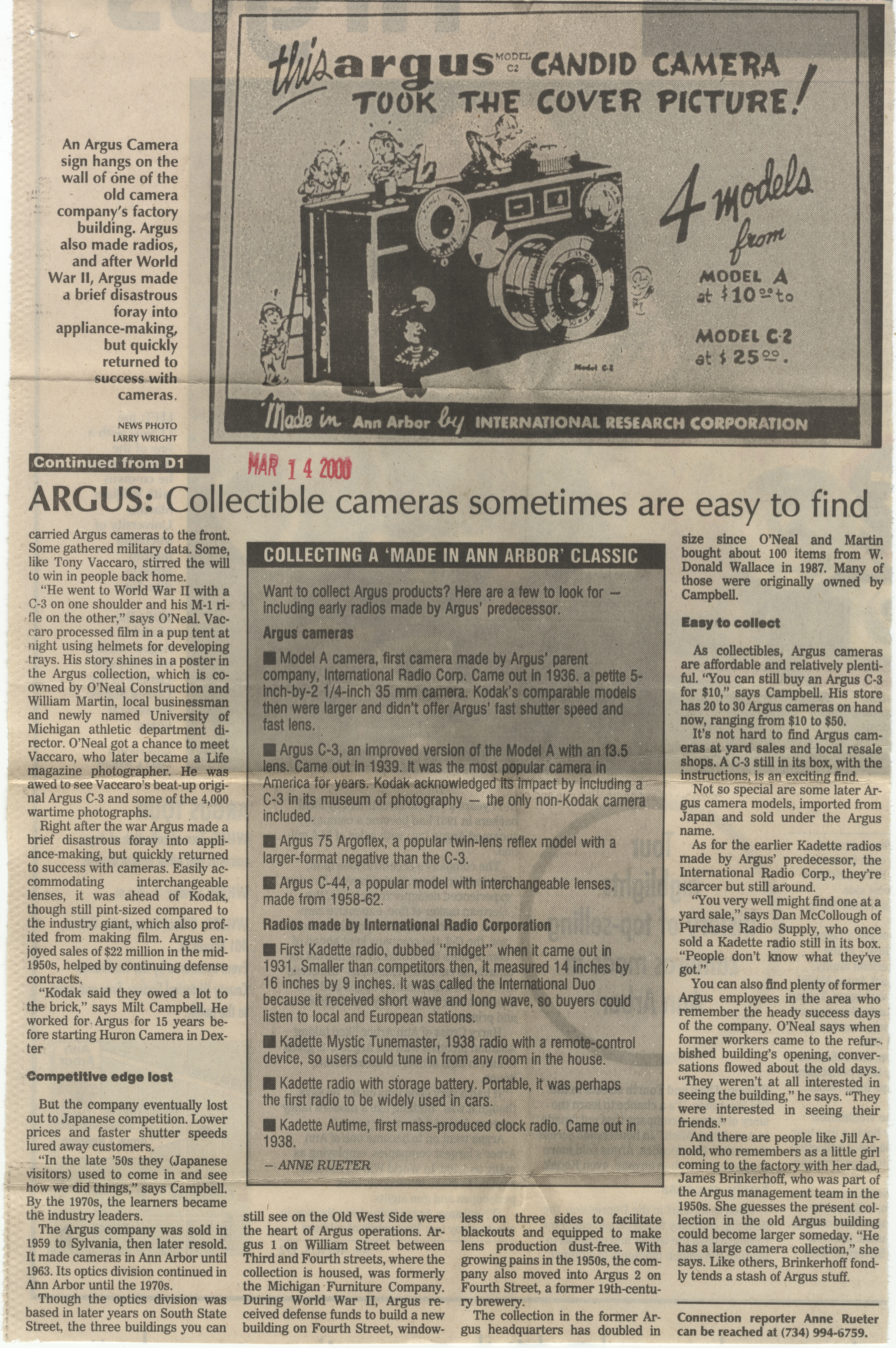 LEFT:joe 0'Neal with a few of the Argus cameras he co-owns with William Martin, University of Michigan interim athletic director. Click. It's 1931. Ann Arbor's newest startup company aims to cash in on the technological revolution. From a defunct furniture factory on the west side emerges a midget radio, a winner for the International Radio Corp. "^^^^TSTS^'m^fM^TatSca^ camera - or something close - in the hands of the average American family? With its affordable, compact Argus Model A, the company scores even bigger. Taking thp "arno \rwv inc., it starts churning out top-selling cameras-;i America m the 1940s and '50s, Click. World War II is on, and Allied sol- diers peer through Argus tank periscopes to help rout German troops from North Africa. On Sunday at 2 p.m., the Washtenaw County Historical Society hosts a free tour, open to the public, of a 200-piece collection of Argus cameras, projectors, posters and wartime precision lenses. Joe O'Neal, whose O'Nea' ruction Co. co-owns the collection, \i i ^ the tour, right in the place where the products were conceived and produced: the refur- bished furniture/camera factory at West cameras made in Ann Arbor William, Third and Fourth streets in the Old West Side. It's a chance to leam the story of Argus, a company that put "made in Ann Arbor, Mich." in households across the nation. For decades, Argus sold more 35mm cameras th rsvos n • even Kodak. Early success Even at its start in the Depression, the fledgling company found people eager for radios to pass the winter and cameras to capture the golden moments of summer. In 11 years a $10,000 investment bv loral backers in 1931 had b< renamed Argus Inc., wiin sales w i^.y mil- lion. The company's eccentric idea man, Charles Verschoor, had shrewdly hired an experienced designer from Leica, the German maker of fine, expensive cam- eras. With the Model A's popular succes- - sor, the C-3, the company kept ahead of competitors like Kodak in the market for affordable cameras. Known as "the brick," the C-3 had a fast shutter speed and fast lens that took good-quality 35mm slides anri- ii.i- n Arbor liked taking vacation en to hit".'" ; i school for an academic hOKi, "It had a very good lens on it," he says, though it was "nothing like a mnriprn fancy camera. I used it for many Argus went on to become one of Ann Arbor's largest companies, employing as many as 1,200. In ' 'ar II, the staff swelled to make tci^. < ^nk periscopes and gun s4 O'Neal says Argus helped win the war in another way too: Thousands of soldiers I GUS, D2 WHERE^ O'^leolXonsti-uction Offices, 4 thSt. Event sponsored by the W fft,,,,h »;<;tonca| Society. Free and open to the public. ••"""" •—————^ »BW J 'iw Supply, wiiu oin;ti ' idio still in its box. "reopie aont Know what they've got." You canal?' ^enty of former Argus employ i.••'. m the area who remember the heady success days of the company. O'Neal says when former workers came to the refur-. bished building's opening, conver- sations flowed about the old days. "They weren't at all interested in seeing the building," he says. "They were interested in seeing their friends." And there are people like Jill Ar- nold, who remembers as a little girl coming to the factory with her dad; James Brinkerhoff, who was part of the Argus management team in the 1950s. She guesses th- nr^^it col- lection in the ole iding could become larger someday. "He has a large camera collection," she says. Like others, Brinkerhofif fond- ly tends a stash of Argus stuff. Connection reporter Anne Rueter can be reached at (734) 994-6759. &