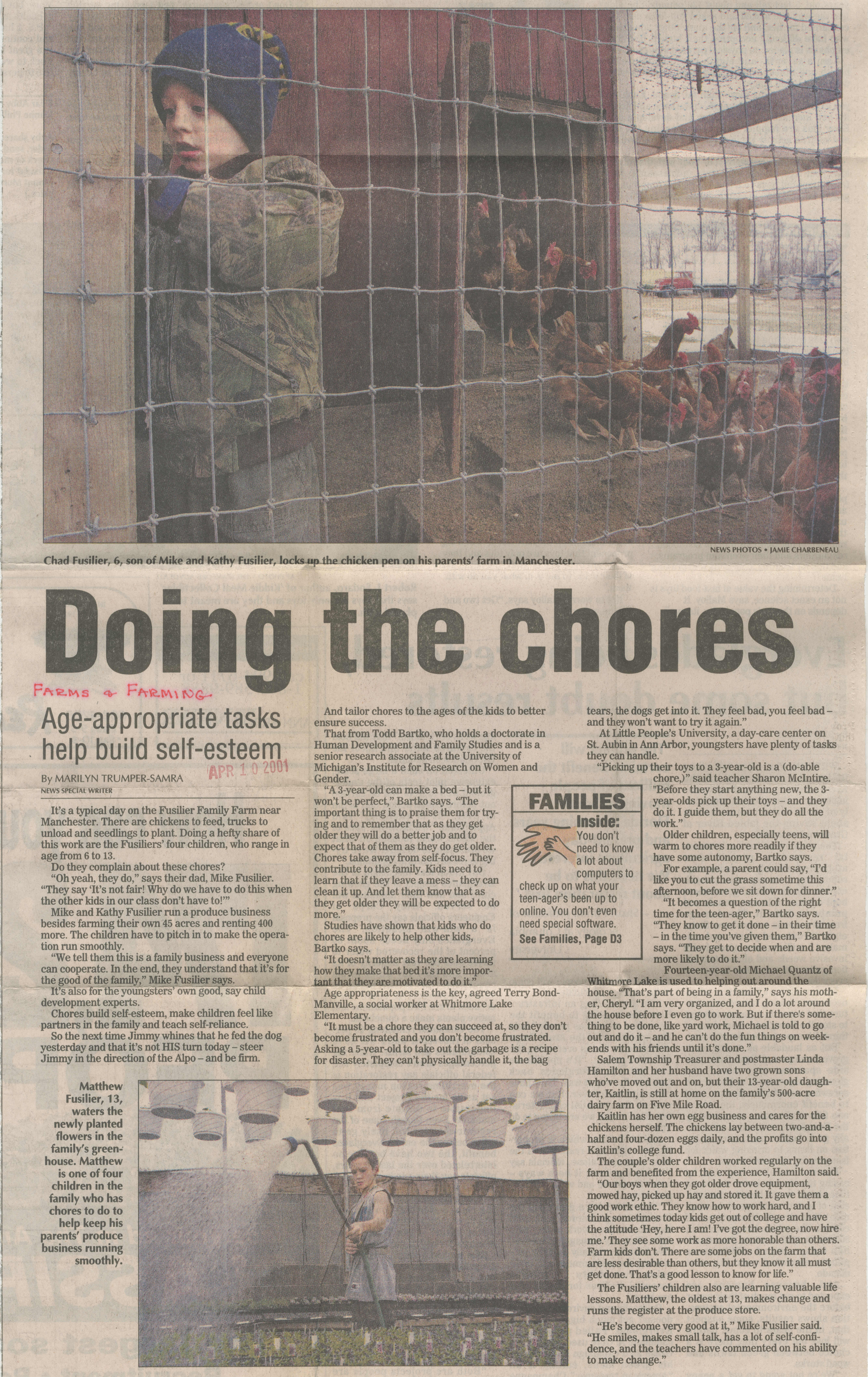 ﻿Chad Fusilier, 6, son of Mike and Kathy Fusilier, locks up the chicken pen on his parents' farm in Manchester.
NEWS PHOTOS • JAMIE CHARBENEAU

It's a typical day on the Fusilier Family Farm near Manchester. There are chickens to feed, trucks to unload, and seedlings to plant. Doing a hefty share of this work are the Fusiliers four children, who range in age from 6 to 13.

Do they complain about these chores?

"Oh yeah, they do," says their dad, Mike Fusilier. "They say, "It's not fair! Why do we have to do this when the other kids in our class don't have to!"

Mike and Kathy fusilier run a produce business besides farming their own 45 acres and renting 400 more. The children have to pitch in to make the operation run smoothly.

"We tell them this is a family business and everyone can cooperate. In the end, they understand that it's for the good of the family," Mike Fusilier says.

It's also for the youngsters' own good, say child development experts.

So the next time Jimmy whines that he fed the dog yesterday and that it's not HIS turn today - steer Jimmy in the direction of the Alpo - and be firm.

And tailor chores to the ages of the kids to better ensure success.

That from Todd Bartko, who holds a doctorate in Human Development and Family Studies and is a senior research associate at the University of Michigan’s Institute for Research on Women and Gender.

“A 3-year-old can make a bed - but it won’t be perfect,” Bartko says. “The important thing is to praise them for trying and to remember that as they get older they will do a better job and to expect that of them as they do get older. Chores take away from self-focus. They contribute to the family. Kids need to learn that if they leave a mess - they can clean it up. And let them know that as they get older they will be expected to do more.”

Studies have shown that kids who do chores are likely to help other kids, Bartko says.

“It doesn’t matter as they are learning how they make that bed it’s more important that they are motivated to do it.”

“It must be a chore they can succeed at, so they don’t become frustrated and you don’t become frustrated. Asking a 5-year-old to take out the garbage is a recipe for disaster. They can’t physically handle it, the bag tears, the dogs get into it. They feel bad, you feel bad - and they won’t want to try it again.”

At Little People’s University, a day-care center on St. Aubin in Ann Arbor, youngsters have plenty of tasks they can handle.

“Picking up their toys to a 3-year-old is a do-able chore,” said teacher Sharon Mclntire. "Before they start anything new, the 3-year-olds pick up their toys - and they do it. I guide them, but they do all the work.”

Older children, especially teens, will warm to chores more readily if they have some autonomy, Bartko says.

For example, a parent could say, “I’d like you to cut the grass sometime this afternoon, before we sit down for dinner.”

Fourteen-year-old Michael Quantz of Whitmore Lake is used to helping out around the house. “That’s part of being in a family,” says his mother, Cheryl. “I am very organized, and I do a lot around the house before I even go to work. But if there's something to be done, like yard work, Michael is told to go out and do it - and he can’t do the fun things on weekends with his friends until it’s done.”

Salem Township Treasurer and postmaster Linda Hamilton and her husband have two grown sons who've moved out and on, but their 13-year-old daughter, Kaitlin, is still at home on the family’s 500-acre dairy farm on Five Mile Road.

Kaitlin has her own egg business and cares for the chickens herself. The chickens lay between two-and-a-half and four-dozen eggs daily, and the profits go into Kaitlin’s college fund.

The couple’s older children worked regularly on the farm and benefited from the experience, Hamilton said.

“Our boys when they got older drove equipment, mowed hay, picked up hay and stored it. It gave them a good work ethic. They know how to work hard, and I think sometimes today kids get out of college and have the attitude ‘Hey, here I am! I’ve got the degree, now hire me.’ They see some work as more honorable than others. Farm kids don’t. There are some jobs on the farm that are less desirable than others, but they know it all must get done. That’s a good lesson to know for life.”

The Fusiliers’ children also are learning valuable life lessons. Matthew, the oldest at 13, makes change and runs the register at the produce store.

“He’s become very good at it,” Mike Fusilier said. “He smiles, makes small talk, has a lot of self-confidence, and the teachers have commented on his ability to make change.”

Matthew Fusilier, 13, waters the newly planted flowers in the family's greenhouse. Matthew is one of four children in the family who has chores to do to help keep his parents' produce business running smoothly.