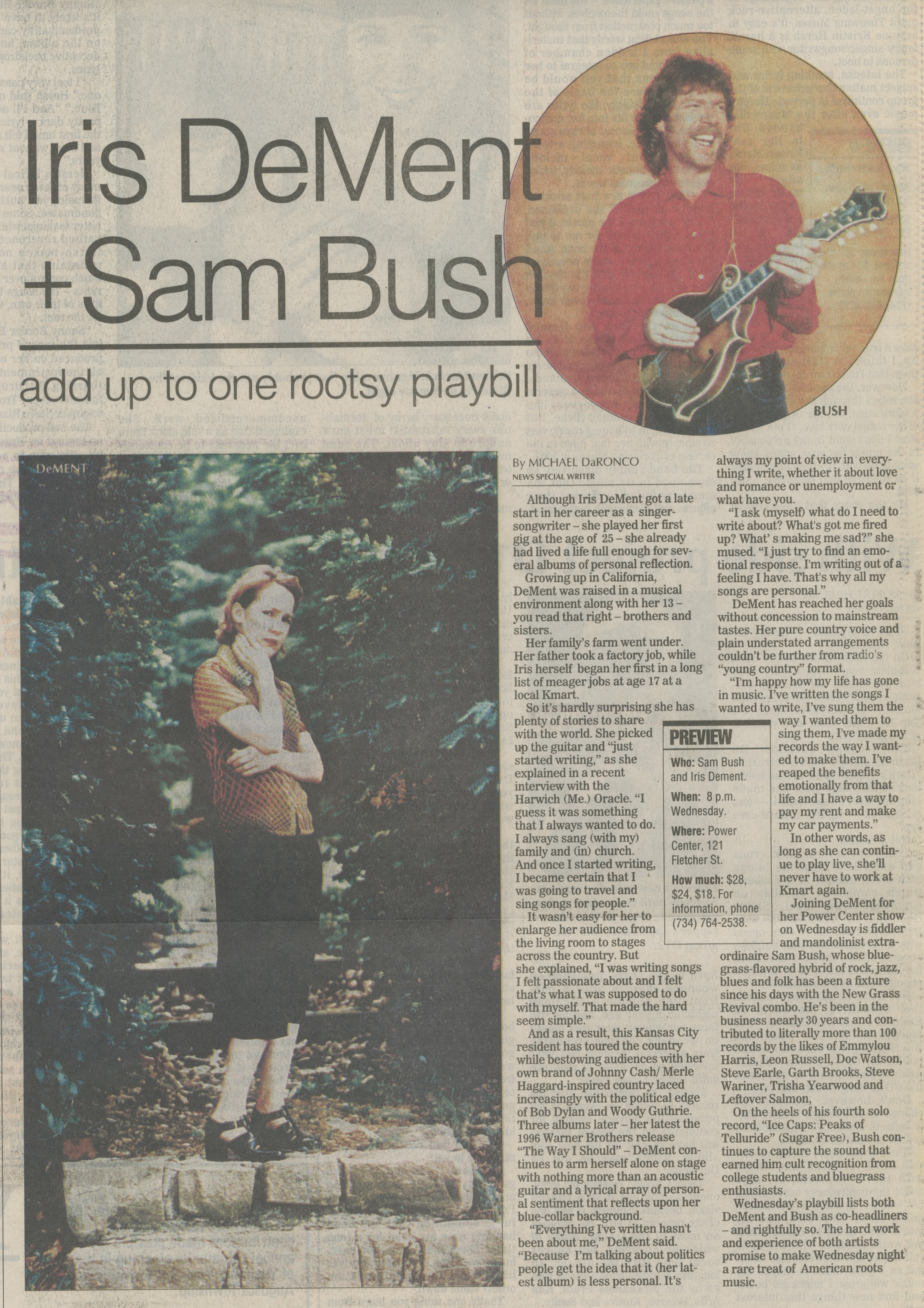 add up to one rootsy playbill

Although Iris DeMent got a late start in her career as a singer-songwriter - she played her first gig at the age of 25 - she already had lived a life full enough for several albums of personal reflection.

Growing up in California,

DeMent was raised in a musical environment along with her 13 -you read that right - brothers and sisters.

Her family’s farm went under.

Her father took a factory job, while Iris herself began her first in a long list of meager jobs at age 17 at a local Kmart.

So it’s hardly surprising she has plenty of stories to share with the world. She picked up the guitar and ‘just started writing,” as she explained in a recent interview with the Harwich (Me.) Oracle. “I guess it was something that I always wanted to do.

I always sang (with my) family and (in) church. And once I started writing, I became certain that I was going to travel and sing songs for people.”

It wasn’t easy for her to enlarge her audience from the living room to stages across the country. But she explained, “I was writing songs I felt passionate about and I felt that’s what I was supposed to do with myself. That made the hard seem simple.”

And as a result, this Kansas City resident has toured the country while bestowing audiences with her own brand of Johnny Cash/ Merle Haggard-inspired country laced increasingly with the political edge of Bob Dylan and Woody Guthrie. Three albums later - her latest the 1996 Warner Brothers release “The Way I Should” - DeMent continues to arm herself alone on stage with nothing more than an acoustic guitar and a lyrical array of personal sentiment that reflects upon her blue-collar background.

“Everything I've written hasn't been about me,” DeMent said. “Because I’m talking about politics people get the idea that it (her latest album) is less personal It's always my point of view in everything I write, whether it about love and romance or unemployment or what have you.

“I ask (myself) what do I need to write about? What's got me fired up? What’s making me sad?” she mused. “I just try to find an emotional response. I'm writing out of a feeling I have. That's why all my songs are personal.”

DeMent has reached her goals without concession to mainstream tastes. Her pure country voice and plain understated arrangements couldn’t be further from radio’s
“young country” format.

“I'm happy how my life has gone in music. I’ve written the songs I wanted to write, I’ve sung them the way I wanted them to sing them, I've made my records the way I wanted to make them. I’ve reaped the benefits emotionally from that life and I have a way to pay my rent and make my car payments.”

In other words, as long as she can continue to play live, she’ll never have to work at Kmart again.

Joining DeMent for her Power Center show on Wednesday is fiddler and mandolinist extraordinaire Sam Bush, whose blue-grass-flavored hybrid of rock, jazz, blues and folk has been a fixture since his days with the New Grass Revival combo. He’s been in the business nearly 30 years and contributed to literally more than 100 records by the likes of Emmylou Harris, Leon Russell, Doc Watson, Steve Earle, Garth Brooks, Steve Wariner, Trisha Yearwood and Leftover Salmon,

On the heels of his fourth solo record, “Ice Caps: Peaks of Telluride” (Sugar Free), Bush continues to capture the sound that earned him cult recognition from college students and bluegrass enthusiasts.

Wednesday’s playbill lists both DeMent and Bush as co-headliners - and rightfully so. The hard work and experience of both artists promise to make Wednesday night a rare treat of American roots music.