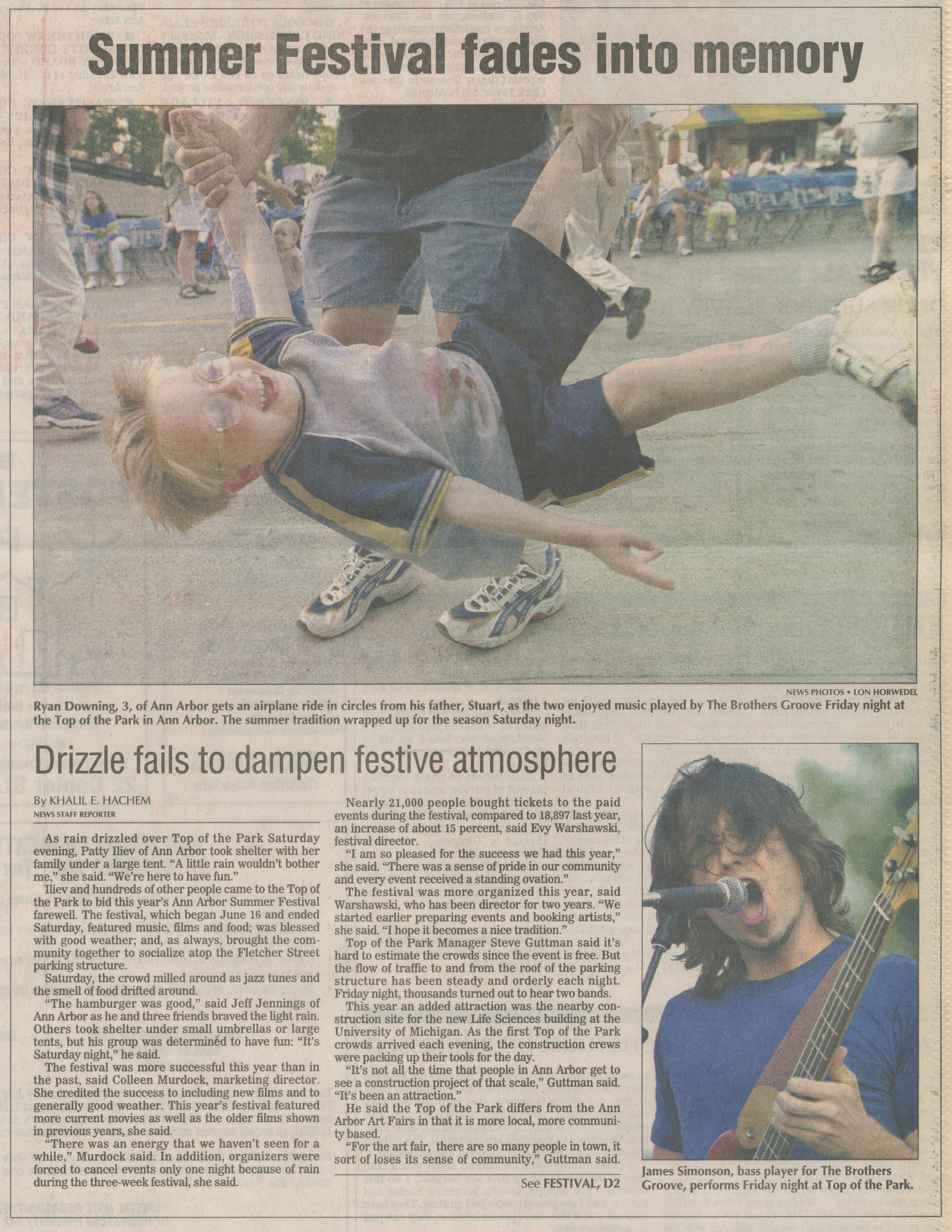 Ryan Downing, 3, of Ann Arbor gets an airplane ride in circles from his father, Stuart, as the two enjoyed music played by The Brothers Groove Friday night at the Top of the Park in Ann Arbor. The summer tradition wrapped up for the season Saturday night.

As rain drizzled over Top of the Park Saturday evening, Patty Iliev of Ann Arbor took shelter with her family under a large tent. “A little rain wouldn’t bother me,” she said. “We’re here to have fun.”

Iliev and hundreds of other people came to the Top of the Park to bid this year’s Ann Arbor Summer Festival farewell. The festival, which began June 16 and ended Saturday, featured music, films and food; was blessed with good weather; and, as always, brought the community together to socialize atop the Fletcher Street parking structure.

Saturday, the crowd milled around as jazz tunes and the smell of food drifted around.

“The hamburger was good,” said Jeff Jennings of Ann Arbor as he and three friends braved the light rain. Others took shelter under small umbrellas or large tents, but his group was determined to have fun: “It’s Saturday night,” he said.

The festival was more successful this year than in the past, said Colleen Murdock, marketing director. She credited the success to including new films and to generally good weather. This year’s festival featured more current movies as well as the older films shown in previous years, she said.

“There was an energy that we haven’t seen for a while,” Murdock said. In addition, organizers were forced to cancel events only one night because of rain during the three-week festival, she said.

Nearly 21,000 people bought tickets to the paid events during the festival, compared to 18,897 last year, an increase of about 15 percent, said Evy Warshawski, festival director.

“I am so pleased for the success we had this year,” she said. “There was a sense of pride in our community and every event received a standing ovation.”

The festival was more organized this year, said Warshawski, who has been director for two years. “We started earlier preparing events and booking artists,” she said. “I hope it becomes a nice tradition.”

Top of the Park Manager Steve Guttman said it’s hard to estimate the crowds since the event is free. But the flow of traffic to and from the roof of the parking structure has been steady and orderly each night. Friday night, thousands turned out to hear two bands.

This year an added attraction was the nearby construction site for the new Life Sciences building at the University of Michigan. As the first Top of the Park crowds arrived each evening, the construction crews were packing up their tools for the day.

“It’s not all the time that people in Ann Arbor get to see a construction project of that scale,” Guttman said. “It’s been an attraction.”

He said the Top of the Park differs from the Ann Arbor Art Fairs in that it is more local, more community based.

“For the art fair, there are so many people in town, it sort of loses its sense of community,” Guttman said.

James Simonson, bass player for The Brothers Groove, performs Friday night at Top of the Park.

Pam Seevers, left, and Peggy Fisher, both of Ann Arbor, enjoy some ice cream while waiting for a friend to arrive at Top of the Park Friday night.

FESTIVAL: Started in '84 to bring summer activity to city

"This is something you can come down here and see your next-door neighbor. You can see the people you went to grade school with."

The festival, which has been a tradition in the city for 18 years, began in 1984 to bring summer activities to the city while the University of Michigan's art department was on summer vacation, Murdock said. Residents brought blankets and food and listened to music in the summer evenings, she said.

Now, the festival has evolved into a tradition with vendors, music and films.

Tammy and Nate Steele, attending Friday night, said the Top event is a great place for families to enjoy themselves. There aren't too many places where people can take their kids and enjoy a band outside, they said.

Adel Polonskaya, 63, of Ann Arbor has attended Top of the Park every year since she moved to the city from Russia 11 years ago. She said the weather and the music were great Friday night.