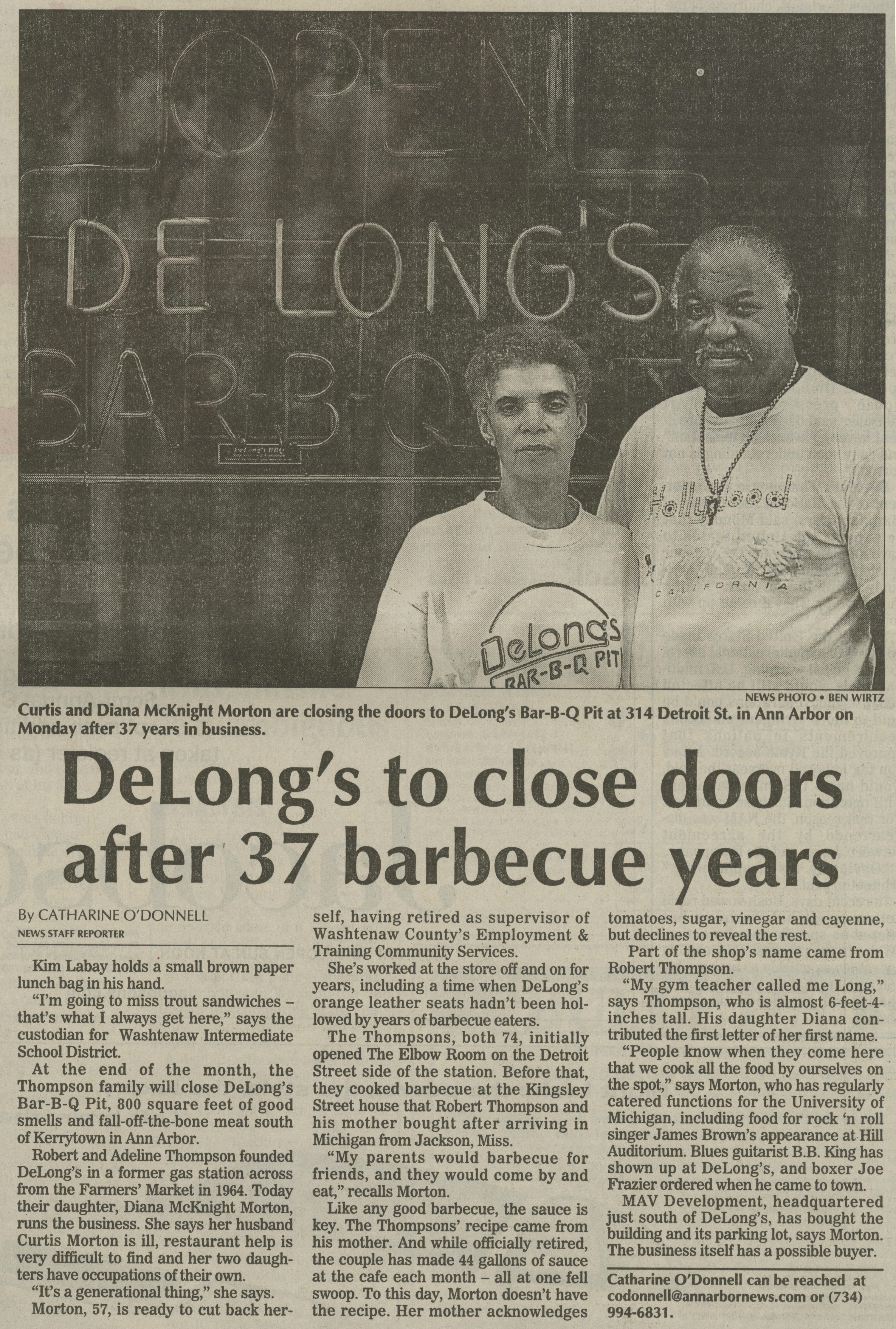 ﻿a<br><br>HOTO • BEN WIRTZ<br><br>Curtis and Diana McKnight Morton are closing the doors to DeLong's Bar-B-Q Pit at 314 Detroit St. in Ann Arbor on Monday after 37 years in business.<br><br>DeLong's to close doors after 37 barbecue years<br><br>By CATHARINE O'DONNELL<br><br>NEWS STAFF REPORTER<br><br>Kim Labay holds a small brown paper lunch bag in his hand.<br><br>“I’m going to miss trout sandwiches -that’s what I always get here,” says the custodian for Washtenaw Intermediate School District.<br><br>At the end of the month, the Thompson family will close DeLong’s Bar-B-Q Pit, 800 square feet of good smells and fall-off-the-bone meat south of Kenytown in Ann Arbor.<br><br>Robert and Adeline Thompson founded DeLong’s in a former gas station across from the Farmers’ Market in 1964. Today their daughter, Diana McKnight Morton, runs the business. She says her husband Curtis Morton is ill, restaurant help is veiy difficult to find and her two daughters have occupations of their own.<br><br>“It’s a generational thing,” she says.<br><br>Morton, 57, is ready to cut back her-<br><br>self, having retired as supervisor of Washtenaw County’s Employment & Training Community Services.<br><br>She’s worked at the store off and on for years, including a time when DeLong’s orange leather seats hadn’t been hollowed by years of barbecue eaters.<br><br>The Thompsons, both 74, initially opened The Elbow Room on the Detroit Street side of the station. Before that, they cooked barbecue at the Kingsley Street house that Robert Thompson and his mother bought after arriving in Michigan from Jackson, Miss.<br><br>“My parents would barbecue for friends, and they would come by and eat,” recalls Morton.<br><br>Like any good barbecue, the sauce is key. The Thompsons’ recipe came from his mother. And while officially retired, the couple has made 44 gallons of sauce at the cafe each month - all at one fell swoop. To this day, Morton doesn’t have the recipe. Her mother acknowledges<br><br>tomatoes, sugar, vinegar and cayenne, but declines to reveal the rest.<br><br>Part of the shop’s name came from Robert Thompson.<br><br>“My gym teacher called me Long,” says Thompson, who is almost 6-feet-4-inches tall. His daughter Diana contributed the first letter of her first name.<br><br>“People know when they come here that we cook all the food by ourselves on the spot,” says Morton, who has regularly catered functions for the University of Michigan, including food for rock ‘n roll singer James Brown’s appearance at Hill Auditorium. Blues guitarist B.B. King has shown up at DeLong’s, and boxer Joe Frazier ordered when he came to town.<br><br>MAV Development, headquartered just south of DeLong’s, has bought the building and its parking lot, says Morton. The business itself has a possible buyer.<br><br>Catharine O'Donnell can be reached at codonnell@annarbomews.com or (734) 994-6831.