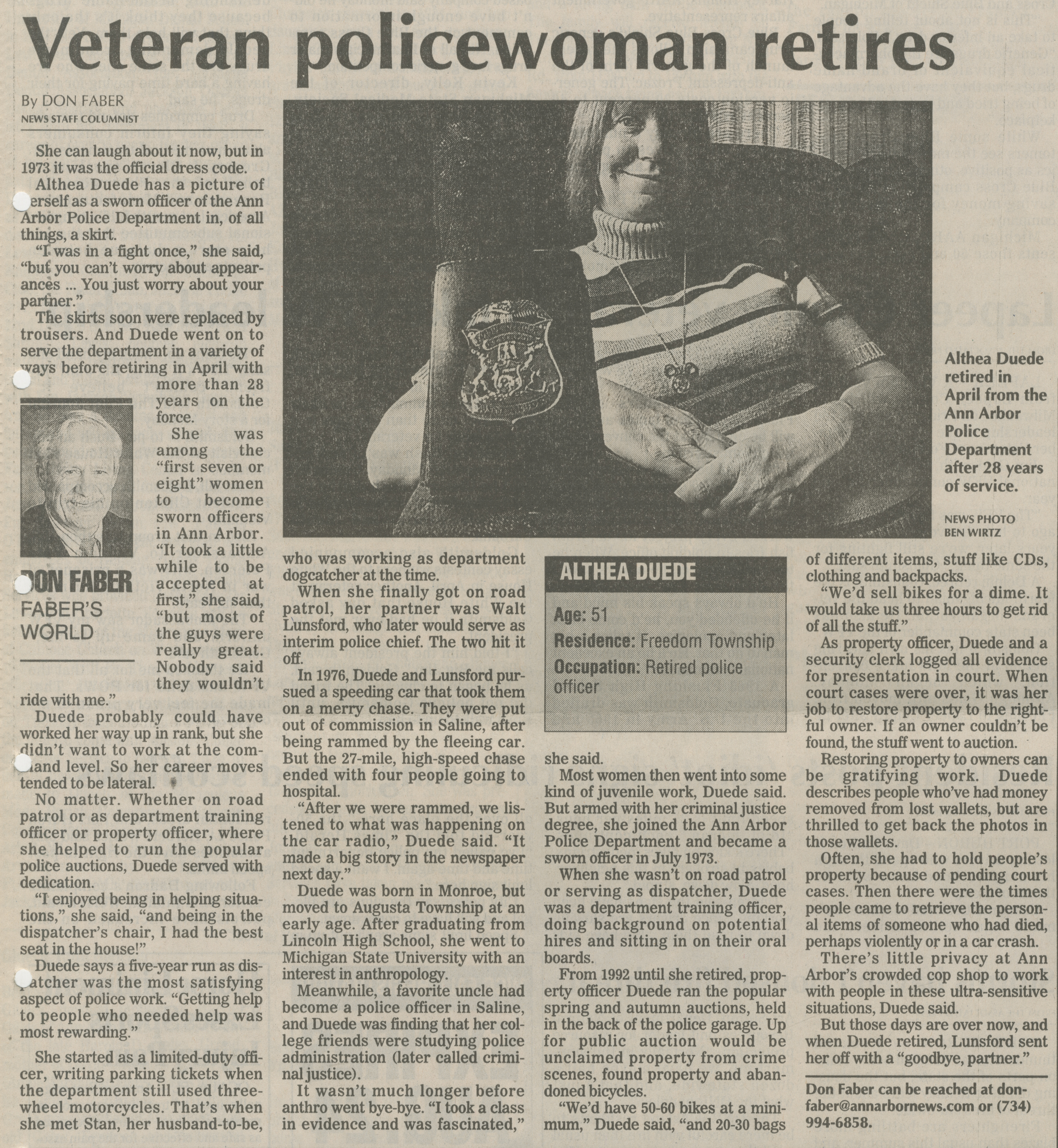 She can laugh about it now, but in 1973 it was the official dress code. Althea Duede has a picture of herself as a sworn officer of the Ann Arbor Police Department in, of all things, a skirt.

“I was in a fight once,” she said, “but you can’t worry about appearances ... You just worry about your partner.”

The skirts soon were replaced by trousers. And Duede went on to serve the department in a variety of ways before retiring in April with more than 28 years on the force.

She was among the “first seven or eight” women to become sworn officers in Ann Arbor. “It took a little while to be accepted at first,” she said, “but most of the guys were really great. Nobody said they wouldn’t ride with me."

Duede probably could have worked her way up in rank, but she didn’t want to work at the command level. So her career moves tended to be lateral.

No matter. Whether on road patrol or as department training officer or property officer, where she helped to run the popular police auctions, Duede served with dedication.

“I enjoyed being in helping situations,” she said, “and being in the dispatcher’s chair, I had the best seat in the house!”

Duede says a five-year run as dispatcher was the most satisfying aspect of police work. “Getting help to people who needed help was most rewarding.”

She started as a limited-duty officer, writing parking tickets when the department still used three-wheel motorcycles. That’s when she met Stan, her husband-to-be, who was working as department dogcatcher at the time.

When she finally got on road patrol, her partner was Walt Lunsford, who later would serve as interim police chief. The two hit it off.

In 1976, Duede and Lunsford pursued a speeding car that took them on a merry chase. They were put out of commission in Saline, after being rammed by the fleeing car. But the 27-mile, high-speed chase ended with four people going to hospital.

“After we were rammed, we listened to what was happening on the car radio,” Duede said. “It made a big story in the newspaper next day.”

Duede was born in Monroe, but moved to Augusta Township at an early age. After graduating from Lincoln High School, she went to Michigan State University with an interest in anthropology.

Meanwhile, a favorite uncle had become a police officer in Saline, and Duede was finding that her college friends were studying police administration (later called criminal justice).

It wasn’t much longer before anthro went bye-bye. “I took a class in evidence and was fascinated,” she said.

Most women then went into some kind of juvenile work, Duede said. But armed with her criminal justice degree, she joined the Ann Arbor Police Department and became a sworn officer in July 1973.

When she wasn’t on road patrol or serving as dispatcher, Duede was a department training officer, doing background on potential hires and sitting in on their oral boards.

From 1992 until she retired, property officer Duede ran the popular spring and autumn auctions, held in the back of the police garage. Up for public auction would be unclaimed property from crime scenes, found property and abandoned bicycles.

“We’d sell bikes for a dime. It would take us three hours to get rid of all the stuff.”

As property officer, Duede and a security clerk logged all evidence for presentation in court. When court cases were over, it was her job to restore property to the rightful owner. If an owner couldn’t be found, the stuff went to auction.

Restoring property to owners can be gratifying work. Duede describes people who’ve had money removed from lost wallets, but are thrilled to get back the photos in those wallets.

Often, she had to hold people’s property because of pending court cases. Then there were the times people came to retrieve the personal items of someone who had died, perhaps violently or in a car crash.

But those days are over now, and when Duede retired, Lunsford sent her off with a “goodbye, partner.”

Althea Duede retired in April from the Ann Arbor Police Department after 28 years of service.