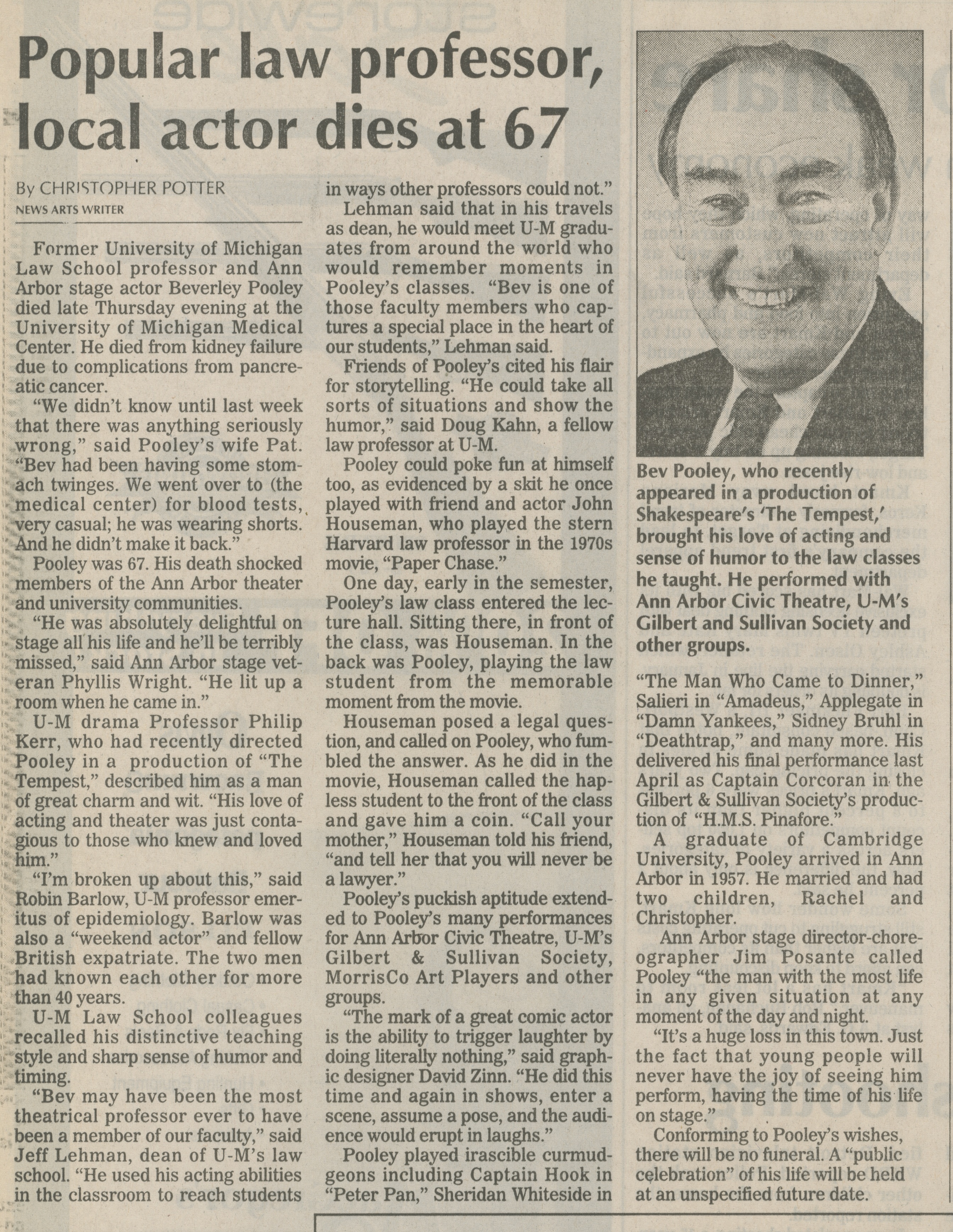 “We didn’t know until last week that there was anything seriously wrong,” said Pooley’s wife Pat. “Bev had been having some stomach twinges. We went over to (the medical center) for blood tests, very casual; he was wearing shorts. And he didn’t make it back.”

Pooley was 67. His death shocked members of the Ann Arbor theater and university communities.

“He was absolutely delightful on stage all his life and he’ll be terribly missed,” said Ann Arbor stage veteran Phyllis Wright. “He lit up a room when he came in.”

U-M drama Professor Philip Kerr, who had recently directed Pooley in a production of “The Tempest,” described him as a man of great charm and wit. “His love of acting and theater was just contagious to those who knew and loved him.”

“I’m broken up about this,” said Robin Barlow, U-M professor emeritus of epidemiology. Barlow was also a “weekend actor” and fellow British expatriate. The two men had known each other for more than 40 years.

“Bev may have been the most theatrical professor ever to have been a member of our faculty,” said Jeff Lehman, dean of U-M’s law school. “He used his acting abilities in the classroom to reach students in ways other professors could not.”

Lehman said that in his travels as dean, he would meet U-M graduates from around the world who would remember moments in Pooley’s classes. “Bev is one of those faculty members who captures a special place in the heart of our students,” Lehman said.

Friends of Pooley’s cited his flair for storytelling. “He could take all sorts of situations and show the humor,” said Doug Kahn, a fellow law professor at U-M.

Pooley could poke fun at himself too, as evidenced by a skit he once played with friend and actor John Houseman, who played the stern Harvard law professor in the 1970s movie, “Paper Chase.”

One day, early in the semester, Pooley’s law class entered the lecture hall. Sitting there, in front of the class, was Houseman. In the back was Pooley, playing the law student from the memorable moment from the movie.

Houseman posed a legal question, and called on Pooley, who fumbled the answer. As he did in the movie, Houseman called the hapless student to the front of the class and gave him a coin. “Call your mother,” Houseman told his friend, “and tell her that you will never be a lawyer.”

“The mark of a great comic actor is the ability to trigger laughter by doing literally nothing,” said graphic designer David Zinn. “He did this time and again in shows, enter a scene, assume a pose, and the audience would erupt in laughs.”

Pooley played irascible curmudgeons including Captain Hook in “Peter Pan,” Sheridan Whiteside in “The Man Who Came to Dinner,” Salieri in “Amadeus,” Applegate in “Damn Yankees,” Sidney Bruhl in “Deathtrap,” and many more. His delivered his final performance last April as Captain Corcoran in the Gilbert & Sullivan Society’s production of “H.M.S. Pinafore.”

Bev Pooley, who recently appeared in a production of Shakespeare's 'The Tempest/ brought his love of acting and sense of humor to the law classes he taught. He performed with Ann Arbor Civic Theatre, U-M's Gilbert and Sullivan Society and other groups.

A graduate of Cambridge University, Pooley arrived in Ann Arbor in 1957. He married and had two children, Rachel and Christopher.

Ann Arbor stage director-choreographer Jim Posante called Pooley “the man with the most life in any given situation at any moment of the day and night.

“It’s a huge loss in this town. Just the fact that young people will never have the joy of seeing him perform, having the time of his life on stage.”

Conforming to Pooley’s wishes, there will be no funeral. A “public celebration” of his life will be held at an unspecified future date.