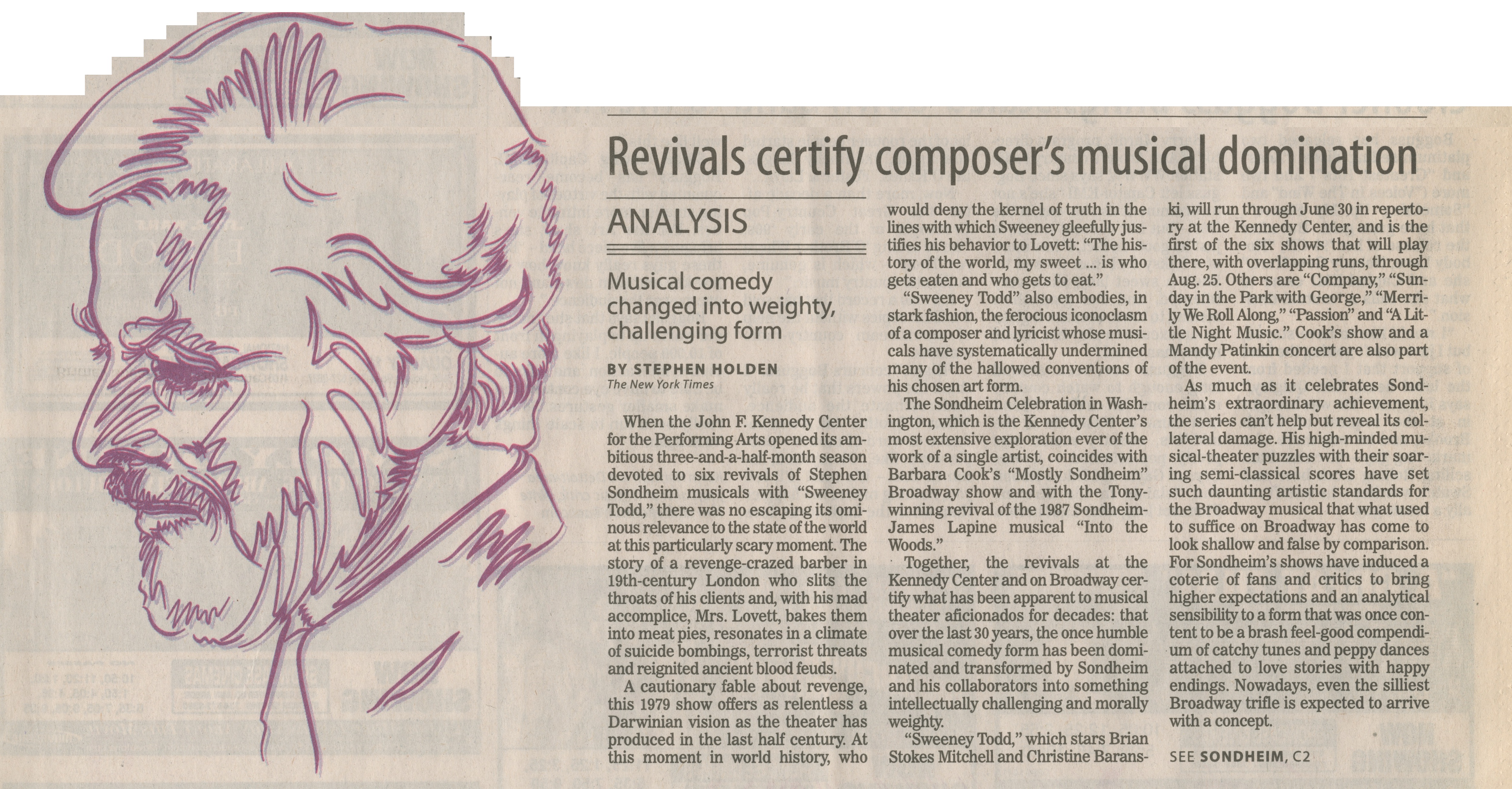 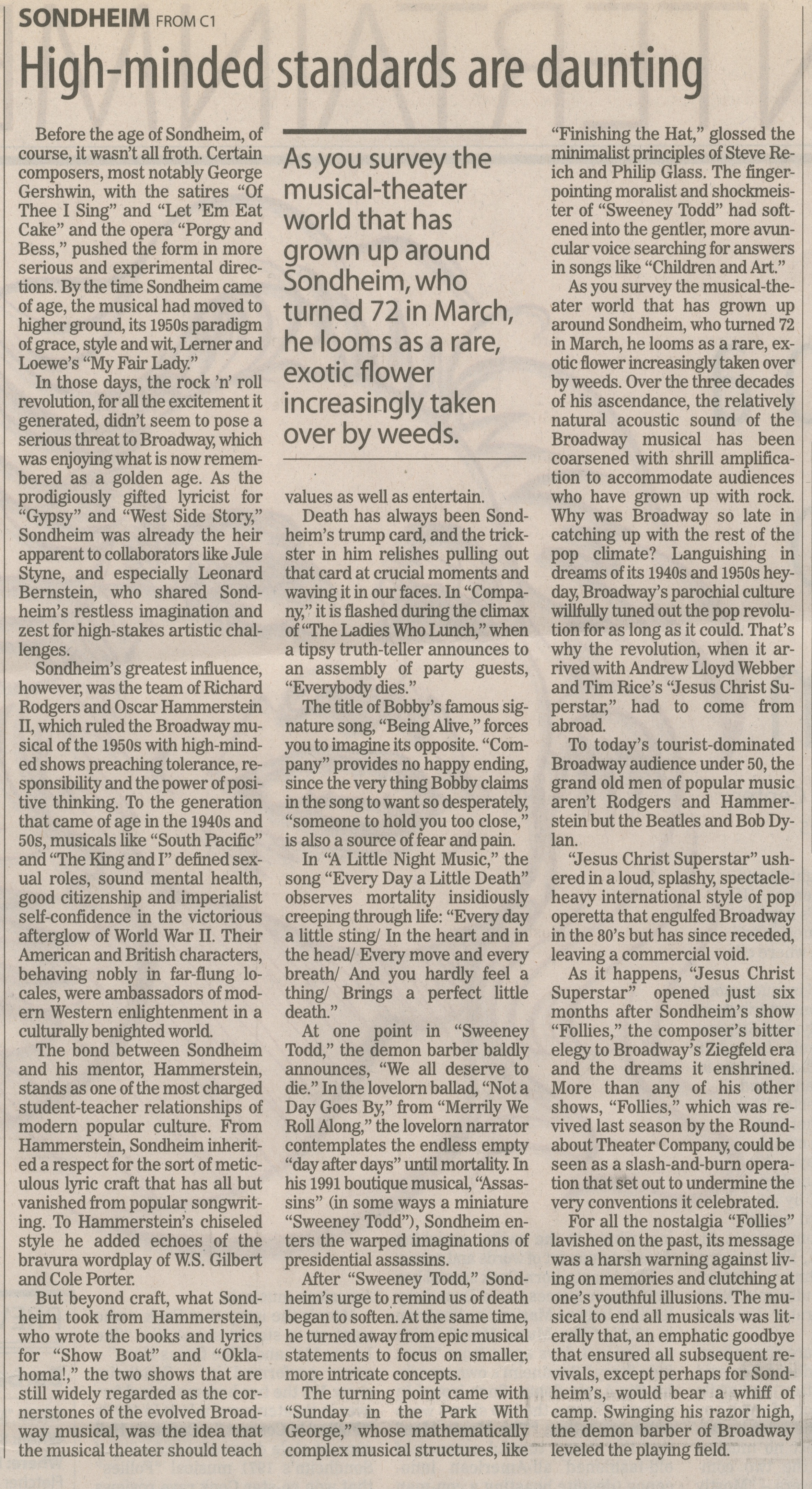 When the John F. Kennedy Center for the Performing Arts opened its ambitious three-and-a-half-month season devoted to six revivals of Stephen Sondheim musicals with “Sweeney Todd,” there was no escaping its ominous relevance to the state of the world at this particularly scary moment. The story of a revenge-crazed barber in 19th-century London who slits the throats of his clients and, with his mad accomplice, Mrs. Lovett, bakes them into meat pies, resonates in a climate of suicide bombings, terrorist threats and reignited ancient blood feuds.

A cautionary fable about revenge, this 1979 show offers as relentless a Darwinian vision as the theater has produced in the last half century. At this moment in world history, who would deny the kernel of truth in the lines with which Sweeney gleefully justifies his behavior to Lovett: “The history of the world, my sweet... is who gets eaten and who gets to eat”

“Sweeney Todd” also embodies, in stark fashion, the ferocious iconoclasm of a composer and lyricist whose musicals have systematically undermined many of the hallowed conventions of his chosen art form.

The Sondheim Celebration in Washington, which is the Kennedy Center’s most extensive exploration ever of the work of a single artist, coincides with Barbara Cook’s “Mostly Sondheim” Broadway show and with the Tony-winning revival of the 1987 Sondheim-James Lapine musical “Into the Woods.”

Together, the revivals at the Kennedy Center and on Broadway certify what has been apparent to musical theater aficionados for decades: that over the last 30 years, the once humble musical comedy form has been dominated and transformed by Sondheim and his collaborators into something intellectually challenging and morally weighty.

“Sweeney Todd,” which stars Brian Stokes Mitchell and Christine Baranski, will run through June 30 in repertory at the Kennedy Center, and is the first of the six shows that will play there, with overlapping runs, through Aug. 25. Others are “Company,” “Sunday in the Park with George,” “Merrily We Roll Along,” “Passion” and “A Little Night Music.” Cook’s show and a Mandy Patinkin concert are also part of the event.

As much as it celebrates Sondheim’s extraordinary achievement, the series can’t help but reveal its collateral damage. His high-minded musical-theater puzzles with their soaring semi-classical scores have set such daunting artistic standards for the Broadway musical that what used to suffice on Broadway has come to look shallow and false by comparison. For Sondheim’s shows have induced a coterie of fans and critics to bring higher expectations and an analytical sensibility to a form that was once content to be a brash feel good compendium of catchy tunes and peppy dances attached to love stories with happy endings. Nowadays, even the silliest Broadway trifle is expected to arrive with a concept

Before the age of Sondheim, of course, it wasn't all froth. Certain composers, most notably George Gershwin, with the satires "Of Thee I Sing" and "Let 'Em Eat Cake" and the opera "Porgy and Bess," pushed the form in more serious and experimental directions. By the time Sondheim came of age, the musical had moved to higher ground, its 1950s paradigm of grace, style and wit, Lerner and Loewe's "My Fair Lady."

In those days, the rock 'n' roll revolution, for all the excitement it generated, didn't seem to pose a serious threat to Broadway, which was enjoying what is now remembered as a golden age. As the prodigiously gifted lyricist for "Gypsy" and "West Side Story," Sondheim was already the heir apparent to collaborators like Jule Styne, and especially Leonard Bernstein, who shared Sondheim's restless imagination and zest for high-stakes artistic challenges.

Sondheim's greatest influence, however, was the team of Richard Rodgers and Oscar Hammerstein II, which ruled the Broadway musical of the 1950s with high-minded shows preaching tolerance, responsibility and power of positive thinking. To the generation that came of age in the 1940s and 50s, musicals like "South Pacific" and "The King and I" defined sexual roles, sound mental health, good citizenship and imperialist self-confidence in the victorious afterglow of World War II. Their American and British characters, behaving nobly in the far-flung locales, were ambassadors of modern Western enlightenment in a culturally benighted world.

The bond between Sondheim and his mentor, Hammerstein, stands as one of the most charged student-teacher relationships of modern popular culture. From Hammerstein, Sondheim inherited a respect for the sort of meticulous lyric craft that has all but vanished from popular songwriting. To Hammerstein's chiseled style he added echoes of the bravura wordplay of W.S. Gilbert and Cole Porter.

But beyond craft, what Sondheim took from Hammerstein, who wrote the books and lyrics for "Show Boat" and "Oklahoma!," the two shows that are still widely regarded as the cornerstones of the evolved Broadway musical, was the idea that the musical theater should teach values as well as entertain.

Death has always been Sondheim's trump card, and the trickster in him relishes pulling out that card at crucial moments and waving it in our faces. In "Company", it is flashed during the climax of "The Ladies Who Lunch," when a tipsy truth-teller announces to an assembly of party guests, "Everybody dies."

The title of Bobby's famous signature song, "Being Alive," forces you to imagine its opposite. "Company" provides no happy ending, since the very thing Bobby claims in the song to want to desperately, "someone to hold you too close," is also a source of fear and pain.

In "A Little Night Music," the song "Every Day a Little Death" observes mortality insidiously creeping through life: "Every day a little sting/ In the heart and in the head/ Every move and every breath/ And you hardly feel a thing/ Brings a perfect little death."

At one point in "Sweeney Todd," the demon barber baldly announces, "We all deserve to die." In the lovelorn ballad, "Not a Day Goes By," from "Merrily We Roll Along," the lovelorn narrator contemplates the endless empty "days after days" until mortality. In his 1991 boutique musical, "Assassins" (in some ways a miniature "Sweeney Todd"), Sondheim enters the warped imaginations of presidential assassins.

After "Sweeney Todd," Sondheim's urge to remind us of death began to soften. At the same time, he turned away from epic musical statements to focus on smaller, more intricate concepts.

The turning point came with "Sunday in the Park With George," whose mathematically complex musical structures, like "Finishing the Hat," glossed the minimalist principles of Steve Reich and Philip Glass. The finger-pointing moralist and shockmeister of "Sweeney Todd" had softened into the gentler, more avuncular voice searching for answers in songs like "Children and Art."

As you survey the musical-theater world that has grown up around Sondheim, who turned 72 in March, he looms as a rare, exotic flower increasingly taken over by weeds. Over the three decades of his ascendance, the relatively natural acoustic sound of the Broadway musical has been coarsened with shrill amplification to accommodate audiences who have grown up with rock. Why was Broadway so late in catching up with the rest of the pop climate? Languishing in dreams of its 1940s and 1950s heyday, Broadway's parochial culture willfully tuned out the pop revolution for as long as it could. That's why the revolution, when it arrived with Andrew Lloyd Webber and Tim Rice's "Jesus Christ Superstar," had to come from abroad.

To today's tourist-dominated Broadway audience under 50, the grand old men of popular music aren't Rodgers and Hammerstein but the Beatles and Bob Dylan.

"Jesus Christ Superstar" ushered in a loud, splashy, spectacle-heavy international style of pop operetta that engulfed Broadway in the 80's but has since receded, leaving a commercial void.

As it happens, "Jesus Christ Superstar" opened just six months after Sondheim's show "Follies," the composer's bitter elegy to Broadway's Ziegfeld era and the dreams it enshrined. More than any of his other shows, "Follies," which was revived last season by the Round-about Theater Company, could be seen as a slash-and-burn operation that set out to undermine the very conventions it celebrated.

For all the nostalgia "Follies" lavished on the past, its message was a harsh warning against living on memories and clutching at one's youthful illusions. The musical to end all musicals was literally that, an emphatic goodbye that ensured all subsequent revivals, except perhaps for Sondheim's, would bear a whiff of camp. Swinging his razor high, the demon barber of Broadway leveled the playing field.