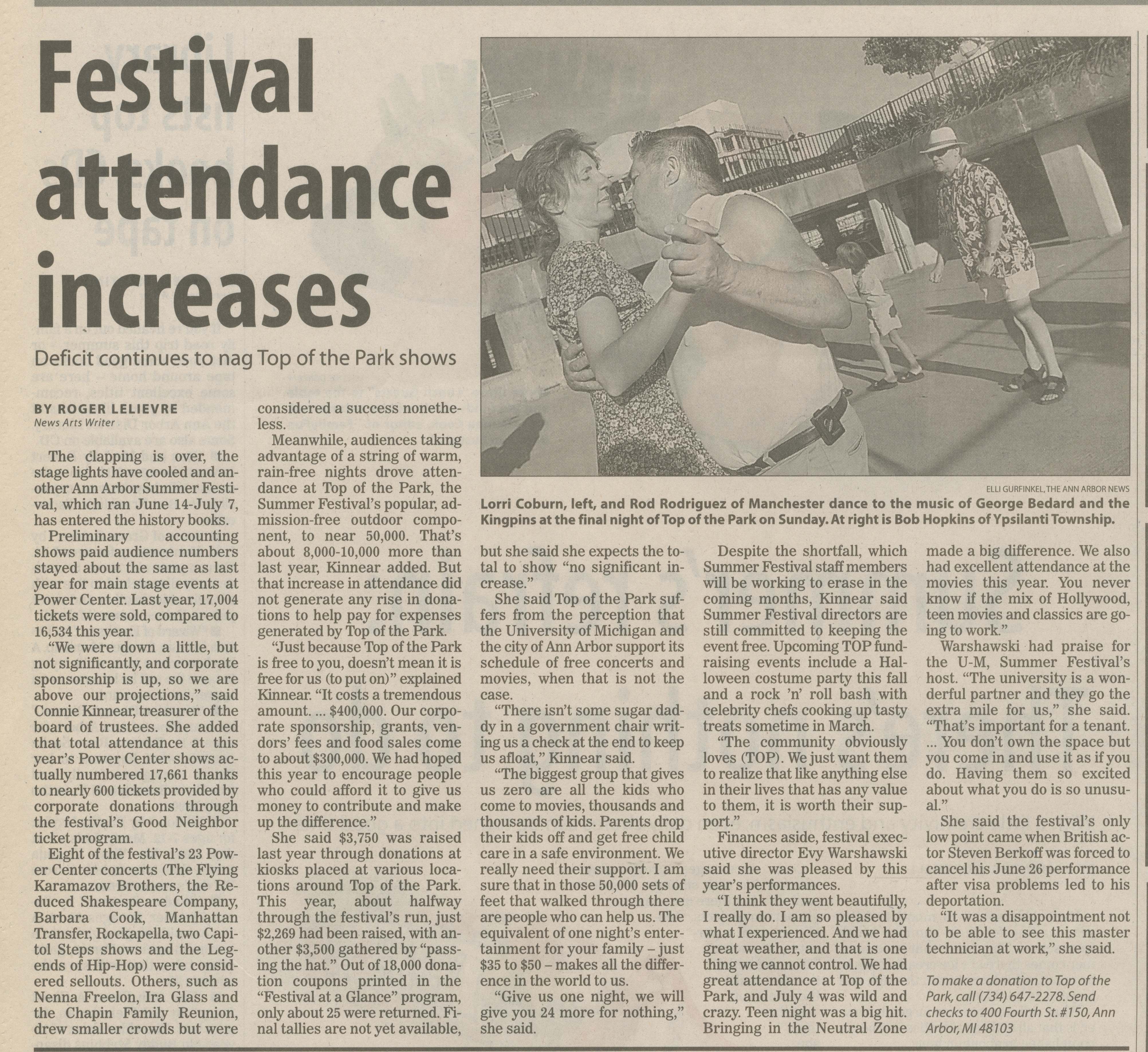 Deficit continues to nag Top of the Park shows

Lorri Coburn, left, and Rod Rodriguez of Manchester dance to the music of George Bedard and the Kingpins at the final night of Top of the Park on Sunday. At right is Bob Hopkins of Ypsilanti Township.

The clapping is over, the stage lights have cooled and another Ann Arbor Summer Festival, which ran June 14-July 7, has entered the history books.

“We were down a little, but not significantly, and corporate sponsorship is up, so we are above our projections,” said Connie Kinnear, treasurer of the board of trustees. She added that total attendance at this year’s Power Center shows actually numbered 17,661 thanks to nearly 600 tickets provided by corporate donations through the festival’s Good Neighbor ticket program.

Eight of the festival’s 23 Power Center concerts (The Flying Karamazov Brothers, the Reduced Shakespeare Company, Barbara Cook, Manhattan Transfer, Rockapella, two Capitol Steps shows and the Legends of Hip-Hop) were considered sellouts. Others, such as Nenna Freelon, Ira Glass and the Chapin Family Reunion, drew smaller crowds but were considered a success nonetheless.

Meanwhile, audiences taking advantage of a string of warm, rain-free nights drove attendance at Top of the Park, the Summer Festival’s popular, admission-free outdoor component, to near 50,000. That’s about 8,000-10,000 more than last year, Kinnear added. But that increase in attendance did not generate any rise in donations to help pay for expenses generated by Top of the Park.

“Just because Top of the Park is free to you, doesn’t mean it is free for us (to put on)” explained Kinnear. “It costs a tremendous amount.... $400,000. Our corporate sponsorship, grants, vendors’ fees and food sales come to about $300,000. We had hoped this year to encourage people who could afford it to give us money to contribute and make up the difference.”

She said $3,750 was raised last year through donations at kiosks placed at various locations around Top of the Park. This year, about halfway through the festival’s run, just $2,269 had been raised, with another $3,500 gathered by “passing the hat.” Out of 18,000 donation coupons printed in the “Festival at a Glance” program, only about 25 were returned. Final tallies are not yet available, but she said she expects the total to show “no significant increase.”

She said Top of the Park suffers from the perception that the University of Michigan and the city of Ann Arbor support its schedule of free concerts and movies, when that is not the case.

“There isn’t some sugar daddy in a government chair writing us a check at the end to keep us afloat,” Kinnear said.

“The biggest group that gives us zero are all the kids who come to movies, thousands and thousands of kids. Parents drop their kids off and get free child care in a safe environment. We really need their support. I am sure that in those 50,000 sets of feet that walked through there are people who can help us. The equivalent of one night’s entertainment for your family - just $35 to $50 - makes all the difference in the world to us.

“Give us one night, we will give you 24 more for nothing,” she said.

Despite the shortfall, which Summer Festival staff members will be working to erase in the coming months, Kinnear said Summer Festival directors are still committed to keeping the event free. Upcoming TOP fundraising events include a Halloween costume party this fall and a rock ’n’ roll bash with celebrity chefs cooking up tasty treats sometime in March.

“The community obviously loves (TOP). We just want them to realize that like anything else in their lives that has any value to them, it is worth their support.”

Finances aside, festival executive director Evy Warshawski said she was pleased by this year’s performances.

“I think they went beautifully, I really do. I am so pleased by what I experienced. And we had great weather, and that is one thing we cannot control. We had great attendance at Top of the Park, and July 4 was wild and crazy. Teen night was a big hit. Bringing in the Neutral Zone made a big difference. We also had excellent attendance at the movies this year. You never know if the mix of Hollywood, teen movies and classics are going to work.”

Warshawski had praise for the U-M, Summer Festival's host. “The university is a wonderful partner and they go the extra mile for us,” she said. “That’s important for a tenant. ... You don’t own the space but you come in and use it as if you do. Having them so excited about what you do is so unusual.”

She said the festival’s only low point came when British actor Steven Berkoff was forced to cancel his June 26 performance after visa problems led to his deportation.

“It was a disappointment not to be able to see this master technician at work,” she said.