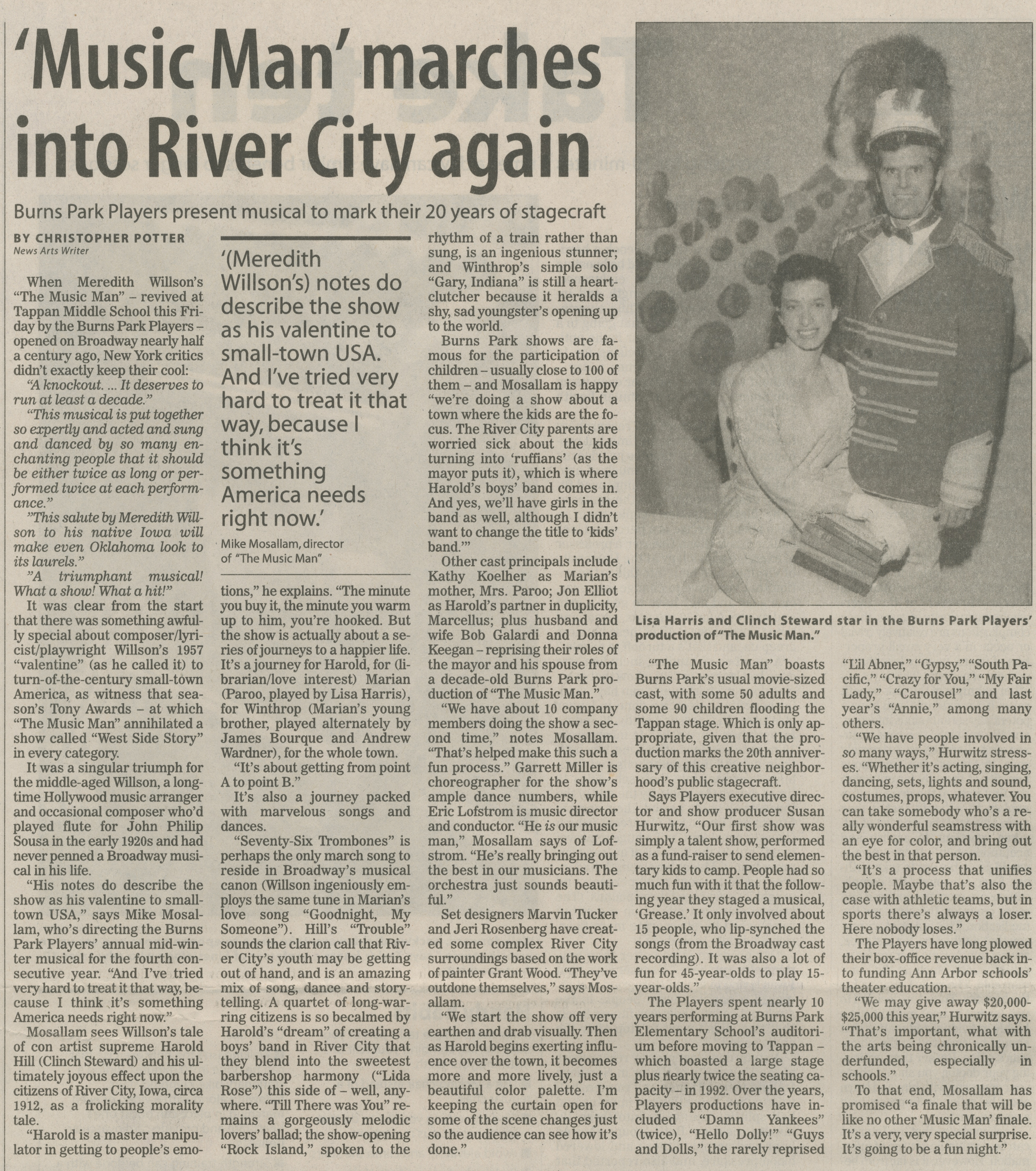 When Meredith Willson’s “The Music Man” - revived at Tappan Middle School this Friday by the Burns Park Players -opened on Broadway nearly half a century ago, New York critics didn’t exactly keep their cool:

“This musical is put together so expertly and acted and sung and danced by so many enchanting people that it should be either twice as long or performed twice at each performance.”

’’This salute by Meredith Willson to his native Iowa will make even Oklahoma look to its laurels.”

”A triumphant musical! What a show! What a hit!”

It was clear from the start that there was something awfully special about composer/lyricist/playwright Willson’s 1957 “valentine” (as he called it) to tum-of-the-century small-town America, as witness that season’s Tony Awards - at which “The Music Man” annihilated a show called “West Side Story” in every category.

It was a singular triumph for the middle-aged Willson, a longtime Hollywood music arranger and occasional composer who’d played flute for John Philip Sousa in the early 1920s and had never penned a Broadway musical in his life.

“His notes do describe the show as his valentine to small town USA,” says Mike Mosallam, who’s directing the Burns Park Players’ annual mid-winter musical for the fourth consecutive year. “And I’ve tried very hard to treat it that way, because I think it’s something America needs right now.”

Mosallam sees Willson’s tale of con artist supreme Harold Hill (Clinch Steward) and his ultimately joyous effect upon the citizens of River City, Iowa, circa 1912, as a frolicking morality tale.

“Harold is a master manipulator in getting to people’s emotions,” he explains. “The minute you buy it, the minute you warm up to him, you’re hooked. But the show is actually about a series of journeys to a happier life. It’s a journey for Harold, for (librarian/love interest) Marian (Paroo, played by Lisa Harris), for Winthrop (Marian’s young brother, played alternately by James Bourque and Andrew Wardner), for the whole town.

“It’s about getting from point A to point B.”

It’s also a journey packed with marvelous songs and dances.

“Seventy-Six Trombones” is perhaps the only march song to reside in Broadway’s musical canon (Willson ingeniously employs the same tune in Marian’s love song “Goodnight, My Someone”). Hill’s “Trouble” sounds the clarion call that River City’s youth may be getting out of hand, and is an amazing mix of song, dance and story telling. A quartet of long-warring citizens is so becalmed by Harold’s “dream” of creating a boys’ band in River City that they blend into the sweetest barbershop harmony (“Lida Rose”) this side of - well, anywhere. “Till There was You” remains a gorgeously melodic lovers’ ballad; the show-opening “Rock Island,” spoken to the rhythm of a train rather than sung, is an ingenious stunner; and Winthrop’s simple solo “Gary, Indiana” is still a heart-clutcher because it heralds a shy, sad youngster’s opening up to the world.

Burns Park shows are famous for the participation of children - usually close to 100 of them - and Mosallam is happy “we’re doing a show about a town where the kids are the focus. The River City parents are worried sick about the kids turning into ‘ruffians’ (as the mayor puts it), which is where Harold’s boys’ band comes in. And yes, we’ll have girls in the band as well, although I didn’t want to change the title to ‘kids’ band.’”

Other cast principals include Kathy Koelher as Marian’s mother, Mrs. Paroo; Jon Elliot as Harold’s partner in duplicity, Marcellus; plus husband and wife Bob Galardi and Donna Keegan - reprising their roles of the mayor and his spouse from a decade-old Burns Park production of “The Music Man.”

“We have about 10 company members doing the show a second time,” notes Mosallam. “That’s helped make this such a fun process.” Garrett Miller is choreographer for the show’s ample dance numbers, while Eric Lofstrom is music director and conductor. “He is our music man,” Mosallam says of Lofstrom. “He’s really bringing out the best in our musicians. The orchestra just sounds beautiful.”

“We start the show off very earthen and drab visually. Then as Harold begins exerting influence over the town, it becomes more and more lively, just a beautiful color palette. I’m keeping the curtain open for some of the scene changes just so the audience can see how it’s done.”

“The Music Man” boasts Burns Park’s usual movie-sized cast, with some 50 adults and some 90 children flooding the Tappan stage. Which is only appropriate, given that the production marks the 20th anniversary of this creative neighborhood’s public stagecraft.

Says Players executive director and show producer Susan Hurwitz, “Our first show was simply a talent show, performed as a fund-raiser to send elementary kids to camp. People had so much fun with it that the following year they staged a musical, ‘Grease.’ It only involved about 15 people, who lip-synched the songs (from the Broadway cast recording). It was also a lot of fun for 45-year-olds to play 15-year-olds.”

The Players spent nearly 10 years performing at Bums Park Elementary School’s auditorium before moving to Tappan -which boasted a large stage plus nearly twice the seating capacity - in 1992. Over the years, Players productions have included “Damn Yankees” (twice), “Hello Dolly!” “Guys and Dolls,” the rarely reprised “Lil Abner,” “Gypsy,” “South Pacific,” “Crazy for You,” “My Fair Lady,” “Carousel” and last year’s “Annie,” among many others.

“We have people involved in so many ways,” Hurwitz stresses. “Whether it’s acting, singing, dancing, sets, lights and sound, costumes, props, whatever. You can take somebody who’s a really wonderful seamstress with an eye for color, and bring out the best in that person.

“It’s a process that unifies people. Maybe that’s also the case with athletic teams, but in sports there’s always a loser. Here nobody loses.”

The Players have long plowed their box-office revenue back into funding Ann Arbor schools’ theater education.

“We may give away $20,000-$25,000 this year,” Hurwitz says. “That’s important, what with the arts being chronically underfunded, especially in schools.”

To that end, Mosallam has promised “a finale that will be like no other ‘Music Man’ finale. It’s a very, very special surprise. It’s going to be a fun night.”

'(Meredith Willson's) notes do describe the show as his valentine to small-town USA. And I've tried very hard to treat it that way, because I think it's something America needs right now.'

Lisa Harris and Clinch Steward star in the Burns Park Players' production of "The Music Man."