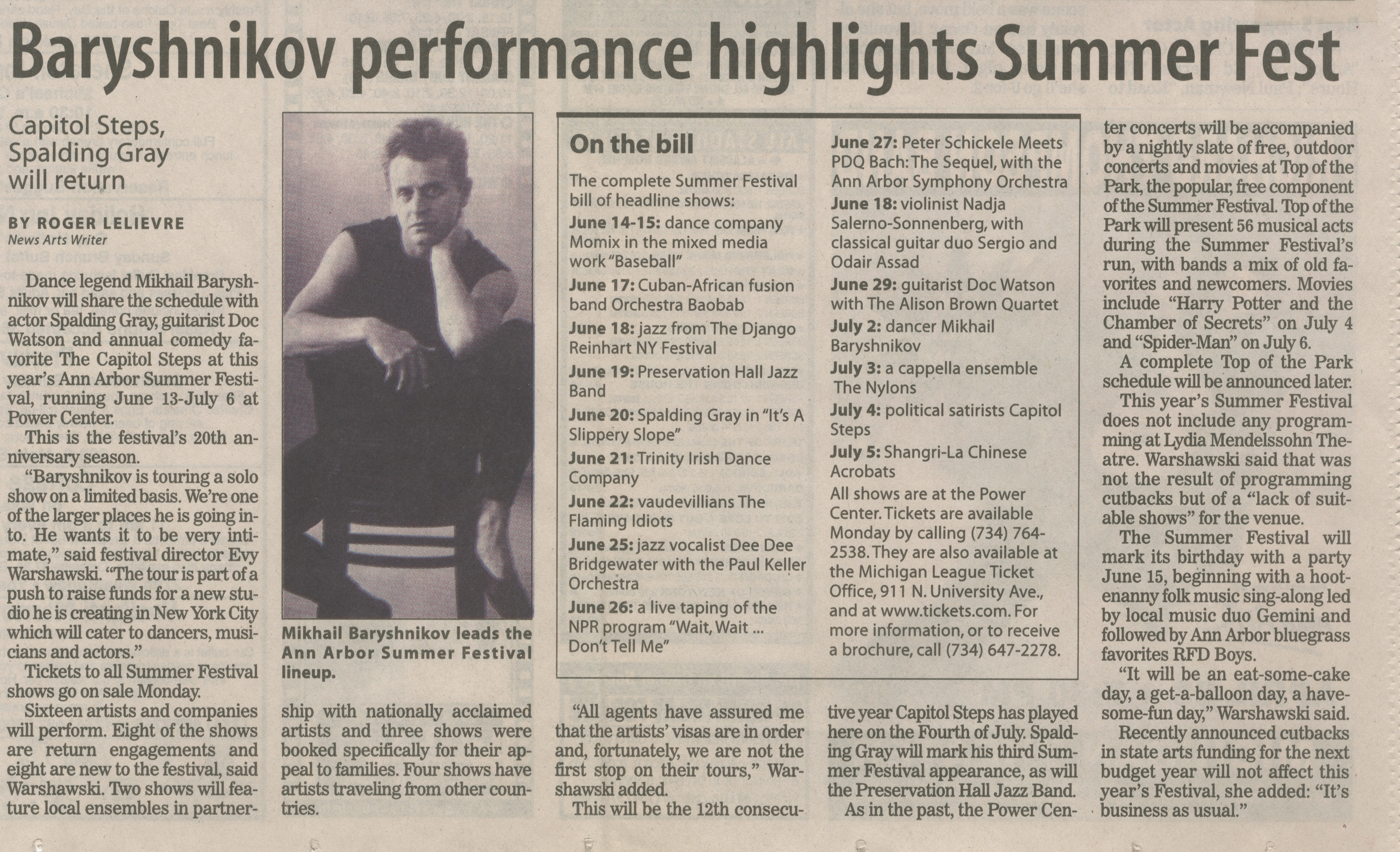 This is the festival’s 20th anniversary season.

“Baryshnikov is touring a solo show on a limited basis. We’re one of the larger places he is going into. He wants it to be very intimate,” said festival director Evy Warshawski. “The tour is part of a push to raise funds for a new studio he is creating in New York City which will cater to dancers, musicians and actors.”

Tickets to all Summer Festival shows go on sale Monday.

Sixteen artists and companies will perform. Eight of the shows are return engagements and eight are new to the festival, said Warshawski. Two shows will feature local ensembles in partnership with nationally acclaimed artists and three shows were booked specifically for their appeal to families. Four shows have artists traveling from other countries.

“All agents have assured me that the artists’ visas are in order and, fortunately, we are not the first stop on their tours,” Warshawski added.

This will be the 12th consecutive year Capitol Steps has played here on the Fourth of July. Spalding Gray will mark his third Summer Festival appearance, as will the Preservation Hall Jazz Band.

As in the past, the Power Center concerts will be accompanied by a nightly slate of free, outdoor concerts and movies at Top of the Park, the popular, free component of the Summer Ftestival. Top of the Park will present 56 musical acts during the Summer Festival’s run, with bands a mix of old favorites and newcomers. Movies include “Harry Potter and the Chamber of Secrets” on July 4 and “Spider-Man” on July 6.

A complete Top of the Park schedule will be announced later.

This year’s Summer Festival does not include any programming at Lydia Mendelssohn Theatre. Warshawski said that was not the result of programming cutbacks but of a “lack of suitable shows” for the venue.

The Summer Festival will mark its birthday with a party June 15, beginning with a hootenanny folk music sing-along led by local music duo Gemini and followed by Ann Arbor bluegrass favorites RFD Boys.

Recently announced cutbacks in state arts funding for the next budget year will not affect this year’s Festival, she added: “It’s business as usual.”

June 20: Spalding Gray in "It's A Slippery Slope"

July 3: a cappella ensemble The Nylons