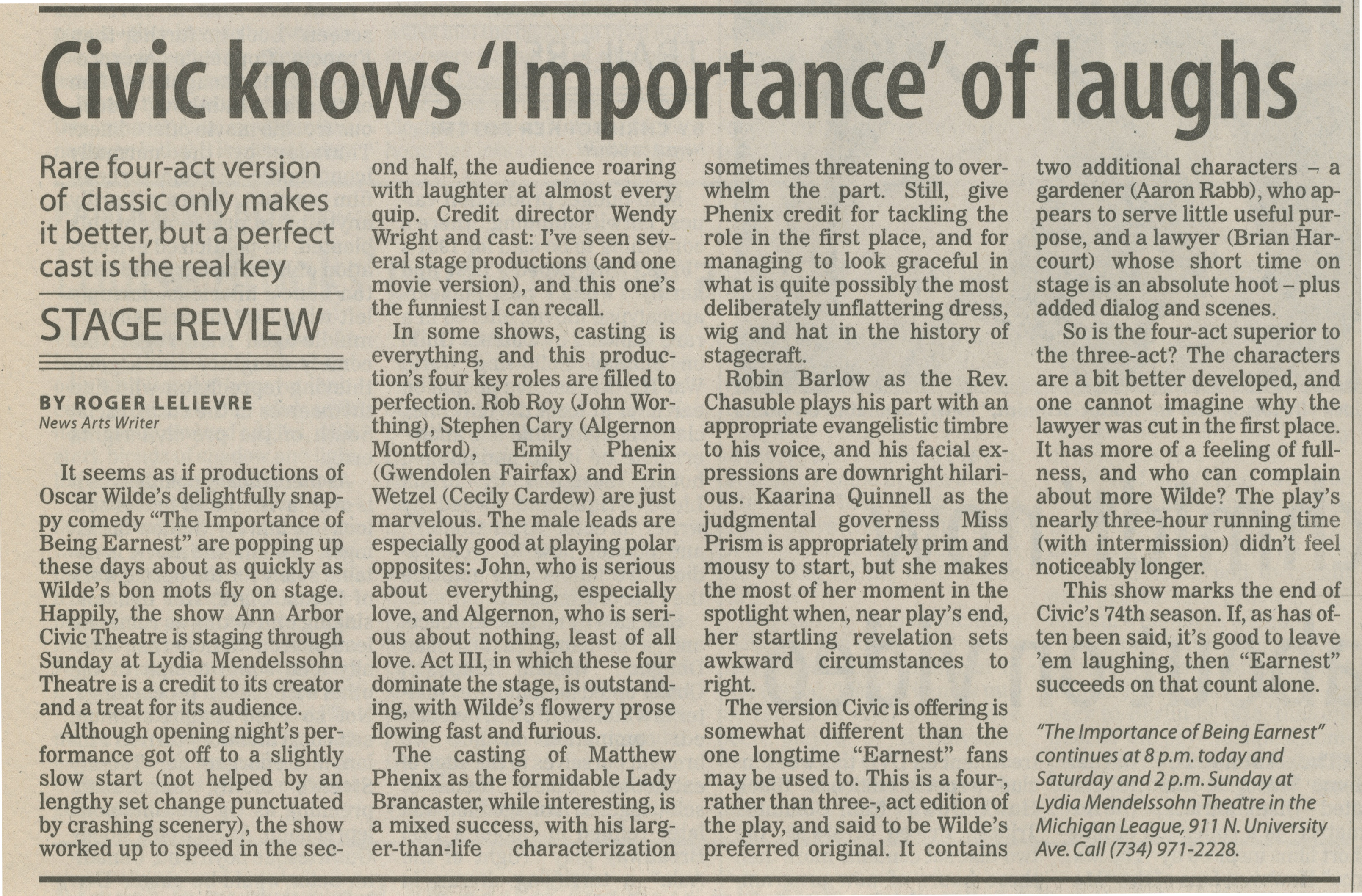 Rare four-act version of classic only makes it better, but a perfect cast is the real key

It seems as if productions of Oscar Wilde’s delightfully snappy comedy “The Importance of Being Earnest” are popping up these days about as quickly as Wilde’s bon mots fly on stage. Happily, the show Ann Arbor Civic Theatre is staging through Sunday at Lydia Mendelssohn Theatre is a credit to its creator and a treat for its audience.

Although opening night’s performance got off to a slightly slow start (not helped by an lengthy set change punctuated by crashing scenery), the show worked up to speed in the second half, the audience roaring with laughter at almost every quip. Credit director Wendy Wright and cast: I’ve seen several stage productions (and one movie version), and this one’s the funniest I can recall.

In some shows, casting is everything, and this production’s four key roles are filled to perfection. Rob Roy (John Worthing), Stephen Cary (Algernon Montford), Emily Phenix (Gwendolen Fairfax) and Erin Wetzel (Cecily Cardew) are just marvelous. The male leads are especially good at playing polar opposites: John, who is serious about everything, especially love, and Algernon, who is serious about nothing, least of all love. Act III, in which these four dominate the stage, is outstanding, with Wilde’s flowery prose flowing fast and furious.

The casting of Matthew Phenix as the formidable Lady Brancaster, while interesting, is a mixed success, with his larger-than-life characterization sometimes threatening to overwhelm the part. Still, give Phenix credit for tackling the role in the first place, and for managing to look graceful in what is quite possibly the most deliberately unflattering dress, wig and hat in the history of stagecraft.

Robin Barlow as the Rev. Chasuble plays his part with an appropriate evangelistic timbre to his voice, and his facial expressions are downright hilarious. Kaarina Quinnell as the judgmental governess Miss Prism is appropriately prim and mousy to start, but she makes the most of her moment in the spotlight when, near play’s end, her startling revelation sets awkward circumstances to right.

The version Civic is offering is somewhat different than the one longtime “Earnest” fans may be used to. This is a four-, rather than three-, act edition of the play, and said to be Wilde’s preferred original. It contains two additional characters - a gardener (Aaron Rabb), who appears to serve little useful purpose, and a lawyer (Brian Har-court) whose short time on stage is an absolute hoot - plus added dialog and scenes.

So is the four-act superior to the three-act? The characters are a bit better developed, and one cannot imagine why the lawyer was cut in the first place. It has more of a feeling of fullness, and who can complain about more Wilde? The play’s nearly three-hour running time (with intermission) didn’t feel noticeably longer.

This show marks the end of Civic’s 74th season. If, as has often been said, it’s good to leave ’em laughing, then “Earnest” succeeds on that count alone.