A tradition at the Top 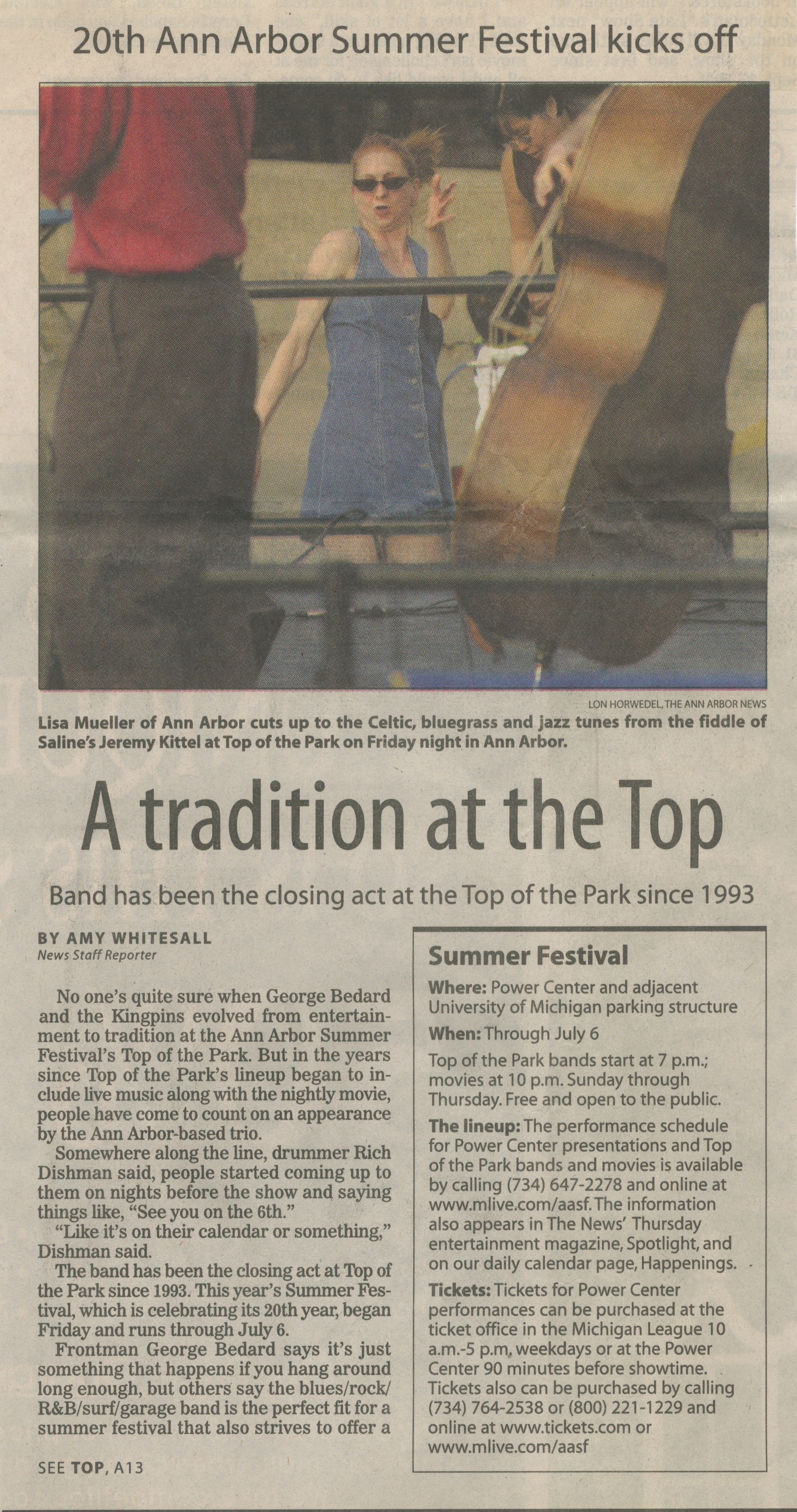 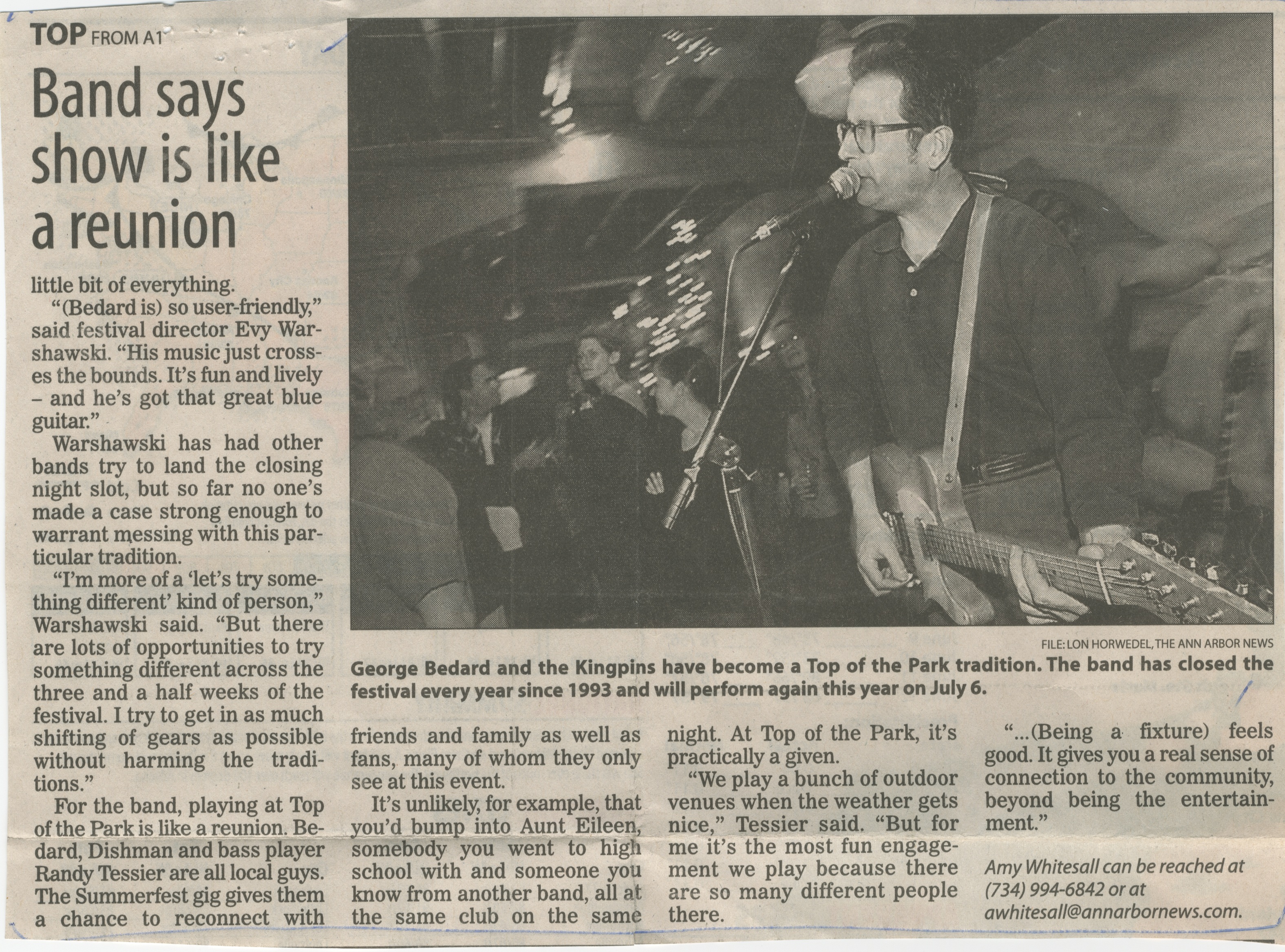 Photo Caption: Lisa Mueller of Ann Arbor cuts up to the Celtic, bluegrass and jazz tunes from the fiddle of Saline's Jeremy Kittel at Top of the Park on Friday night in Ann Arbor.
A tradition at the Top

Top of the Park bands start at 7 p.m.; movies at 10 p.m. Sunday through Thursday. Free and open to the public.

The lineup: The performance schedule for Power Center presentations and Top of the Park bands and movies is available by calling (734) 647-2278 and online at www.mlive.com/aasf. The information also appears in The News' Thursday entertainment magazine, Spotlight, and on our daily calendar page, Happenings.

Tickets: Tickets for Power Center performances can be purchased at the ticket office in the Michigan League 10 a.m.-5 p.m. weekdays or at the Power Center 90 minutes before showtime. Tickets also can be purchased by calling (734) 764-2538 or (800) 221 -1229 and online at www.tickets.com or www.mlive.com/aasf

No one’s quite sure when George Bedard and the Kingpins evolved from entertainment to tradition at the Ann Arbor Summer Festival’s Top of the Park. But in the years since Top of the Park’s lineup began to include live music along with the nightly movie, people have come to count on an appearance by the Ann Arbor-based trio.

Somewhere along the line, drummer Rich Dishman said, people started coming up to them on nights before the show and saying things like, “See you on the 6th.”

“Like it’s on their calendar or something,” Dishman said.

The band has been the closing act at Top of the Park since 1993. This year’s Summer Festival, which is celebrating its 20th year, began Friday and runs through July 6.

Frontman George Bedard says it’s just something that happens if you hang around long enough, but others say the blues/rock/ R&B/surf/garage band is the perfect fit for a summer festival that also strives to offer a little bit of everything.

"(Bedard is) so user-friendly," said festival director Evy Warshawski. "His music just crosses the bounds. It's fun and lively -- and he's got that great blue guitar."

Warshawski has had other bands try to land the closing night slot, but so far no one's made a case strong enough to warrant messing with this particular tradition.

For the band, playing at Top of the Park is like a reunion. Bedard, Dishman and bass player Randy Tessier are all local guys. The Summerfest gig gives them a chance to reconnect with friends and family as well as fans, many of whom they only see at this event.

It's unlikely, for example, that you'd bump into Aunt Eileen, somebody you went to high school with and someone you know from another band, all at the same club on the same night. At Top of the Park, it's practically a given.

"We play a bunch of outdoor venues when the weather gets nice," Tessier said. "But for me it's the most fun engagement we play because there are so many different people there.

"...(Being a fixture) feels good. It gives you a real sense of connection to the community, beyond being the entertainment."

Photo Caption: George Bedard and the Kingpins have become a Top of the Park tradition. The band has closed the festival every year since 1993 and will perform again this year on July 6.