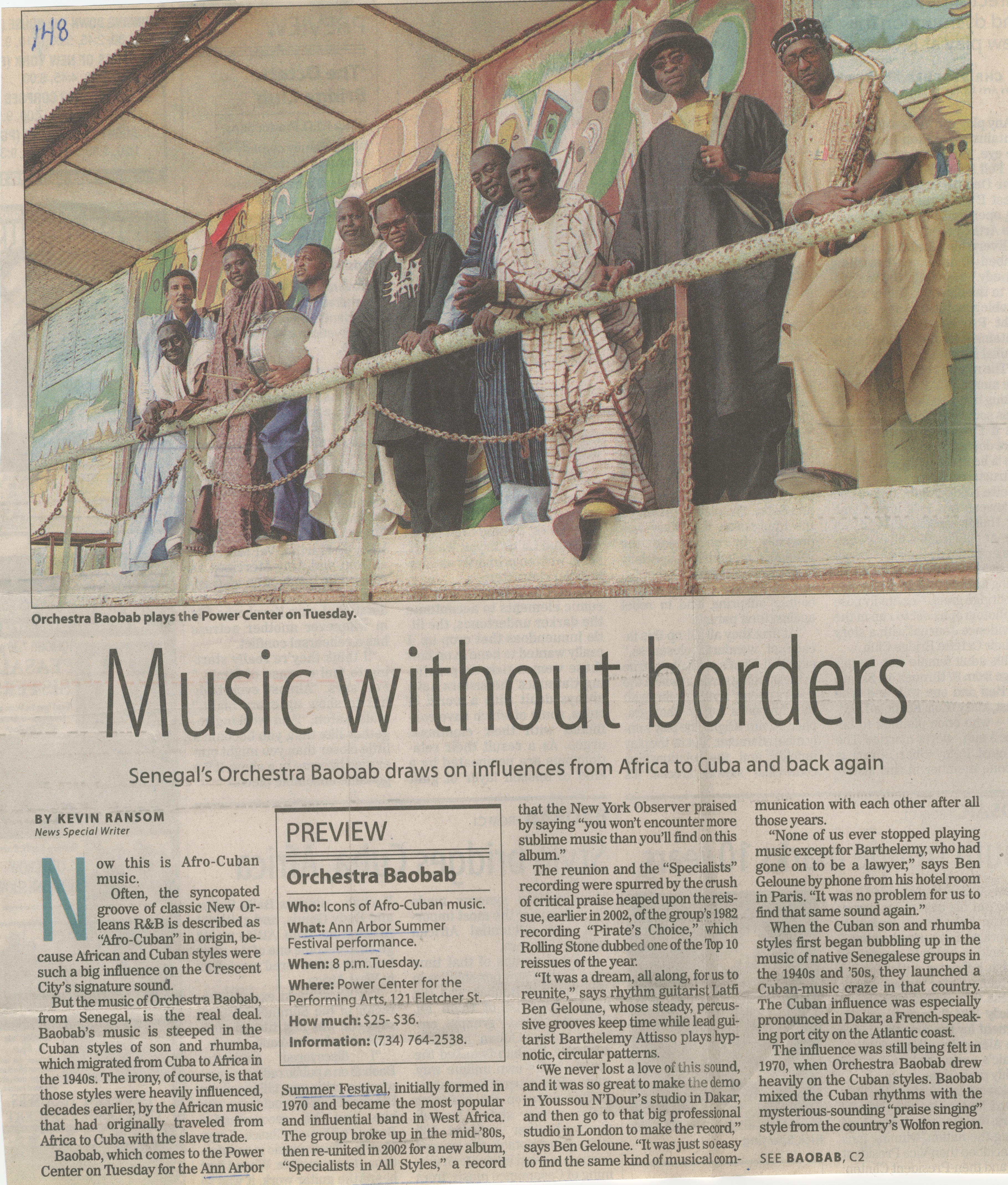 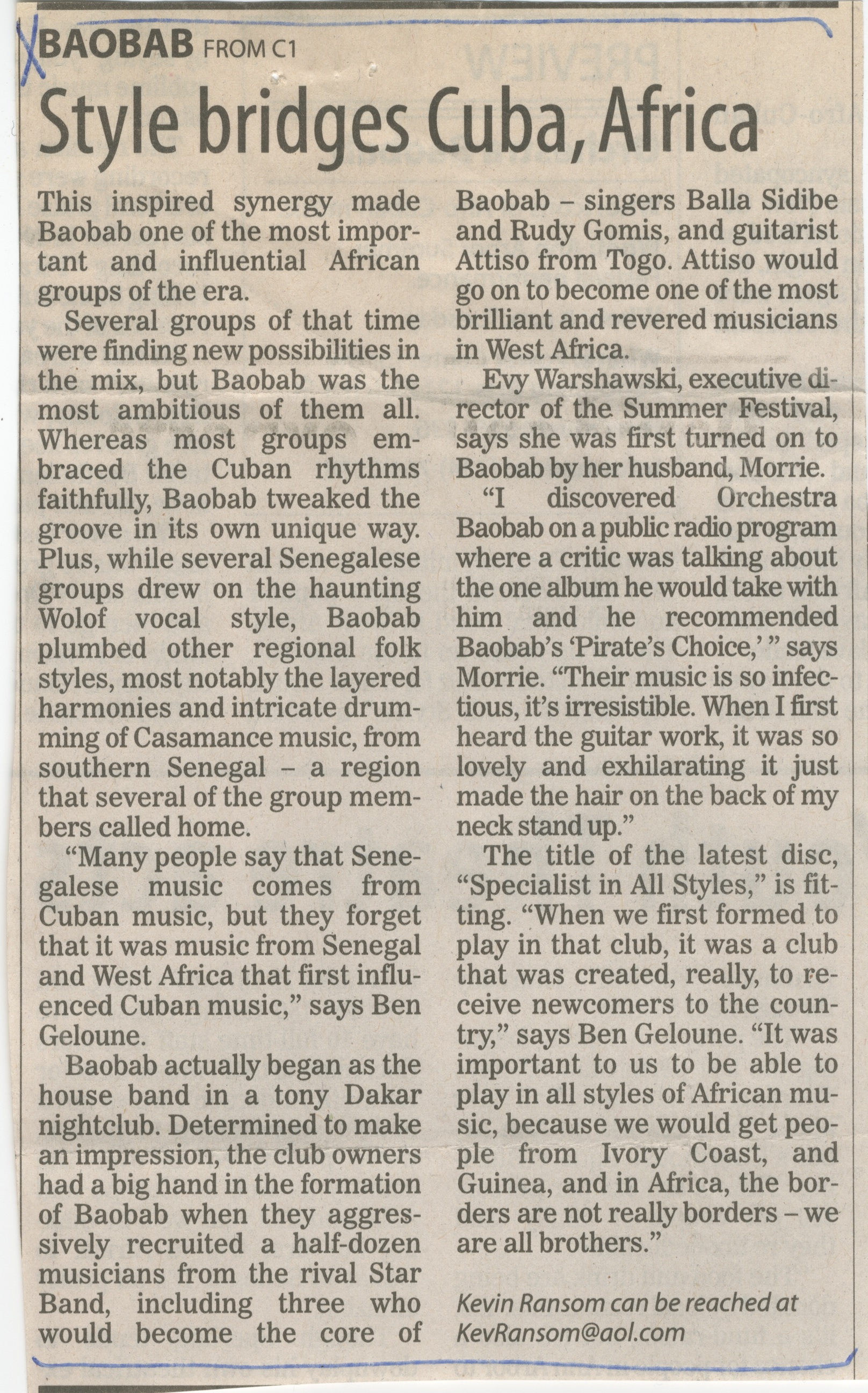 Now this is Afro-Cuban music.

Often, the syncopated groove of classic New Orleans R&B is described as “Afro-Cuban” in origin, because African and Cuban styles were such a big influence on the Crescent City’s signature sound.

But the music of Orchestra Baobab, from Senegal, is the real deal. Baobab’s music is steeped in the Cuban styles of son and rhumba, which migrated from Cuba to Africa in the 1940s. The irony, of course, is that those styles were heavily influenced, decades earlier, by the African music that had originally traveled from Africa to Cuba with the slave trade.

Baobab, which comes to the Power Center on Tuesday for the Ann Arbor

Summer Festival, initially formed in 1970 and became the most popular and influential band in West Africa. The group broke up in the mid-’80s, then re-united in 2002 for a new album, “Specialists in All Styles,” a record

that the New York Observer praised by saying “you won’t encounter more sublime music than you’ll find on this album.”

The reunion and the “Specialists” recording were spurred by the crush of critical praise heaped upon the reissue, earlier in 2002, of the group’s 1982 recording “Pirate’s Choice,” which Rolling Stone dubbed one of the Top 10 reissues of the year.

“It was a dream, all along, for us to reunite,” says rhythm guitarist Latfi Ben Geloune, whose steady, percussive grooves keep time while lead guitarist Barthelemy Attisso plays hypnotic, circular patterns.

“We never lost a love of this sound, and it was so great to make the demo in Youssou N’Dour’s studio in Dakar, and then go to that big professional studio in London to make the record,” says Ben Geloune. “It was just so easy to find the same kind of musical com-

munication with each other after all those years.

“None of us ever stopped playing music except for Barthelemy, who had gone on to be a lawyer,” says Ben Geloune by phone from his hotel room in Paris, “It was no problem for us to find that same sound again.”

When the Cuban son and rhumba styles first began bubbling up in the music of native Senegalese groups in the 1940s and ’50s, they launched a Cuban-music craze in that country. The Cuban influence was especially pronounced in Dakar, a French-speaking port city on the Atlantic coast.

The influence was still being felt in 1970, when Orchestra Baobab drew heavily on the Cuban styles. Baobab mixed the Cuban rhythms with the mysterious-sounding “praise singing” style from the country’s Wolfon region.

Who: Icons of Afro-Cuban music.

Where: Power Center for the Performing Arts, 121 Fletcher St.

This inspired synergy made Baobab one of the most important and influential African groups of the era.

Several groups of that time were finding new possibilities in the mix, but Baobab was the most ambitious of them all. Whereas most groups embraced the Cuban rhythms faithfully, Baobab tweaked the groove in its own unique way. Plus, while several Senegalese groups drew on the haunting Wolof vocal style, Baobab plumbed other regional folk styles, most notably the layered harmonies and intricate drumming of Casamance music, from southern Senegal - a region that several of the group members called home.

"Many people say that Senegalese music comes from Cuban music, but they forget that it was music from Senegal and West Africa that first influenced Cuban music," says Ben Geloune.

Baobab actually began as the house band in a tony Dakar nightclub. Determined to make an impression, the club owners had a big hand in the formation of Baobab when they aggressively recruited a half-dozen musicians from the rival Star Band, including three who would become the core of

Baobab - singers Balla Sidibe and Rudy Gomis, and guitarist Attiso from Togo. Attiso would go on to become one of the most brilliant and revered musicians in West Africa.

Evy Warshawski, executive director of the Summer Festival, says she was first turned on to Baobab by her husband, Morrie.

"I discovered Orchestra Baobab on a public radio program where a critic was talking about one album and he recommended Baobab's 'Pirate's Choice,'" says Morrie. "Their music is so infectious, it's irresistible. When I first heard the guitar work, it was so lovely and exhilarating it just made the hair on the back of my neck stand up."

The title of the latest disc, "Specialist in All Styles," is fitting. "When we first formed to play in that club, it was a club that was created, really, to receive newcomers to the country," says Ben Geloune. "It was important to us to be able to play in all styles of African music, because we would get people from Ivory Coast, and Guinea, and in Africa, the borders are not really borders - we are all brothers."

Kevin Ransom can be reached at KevRanson@aol.com