Big voice for a big band: It's Dee Dee 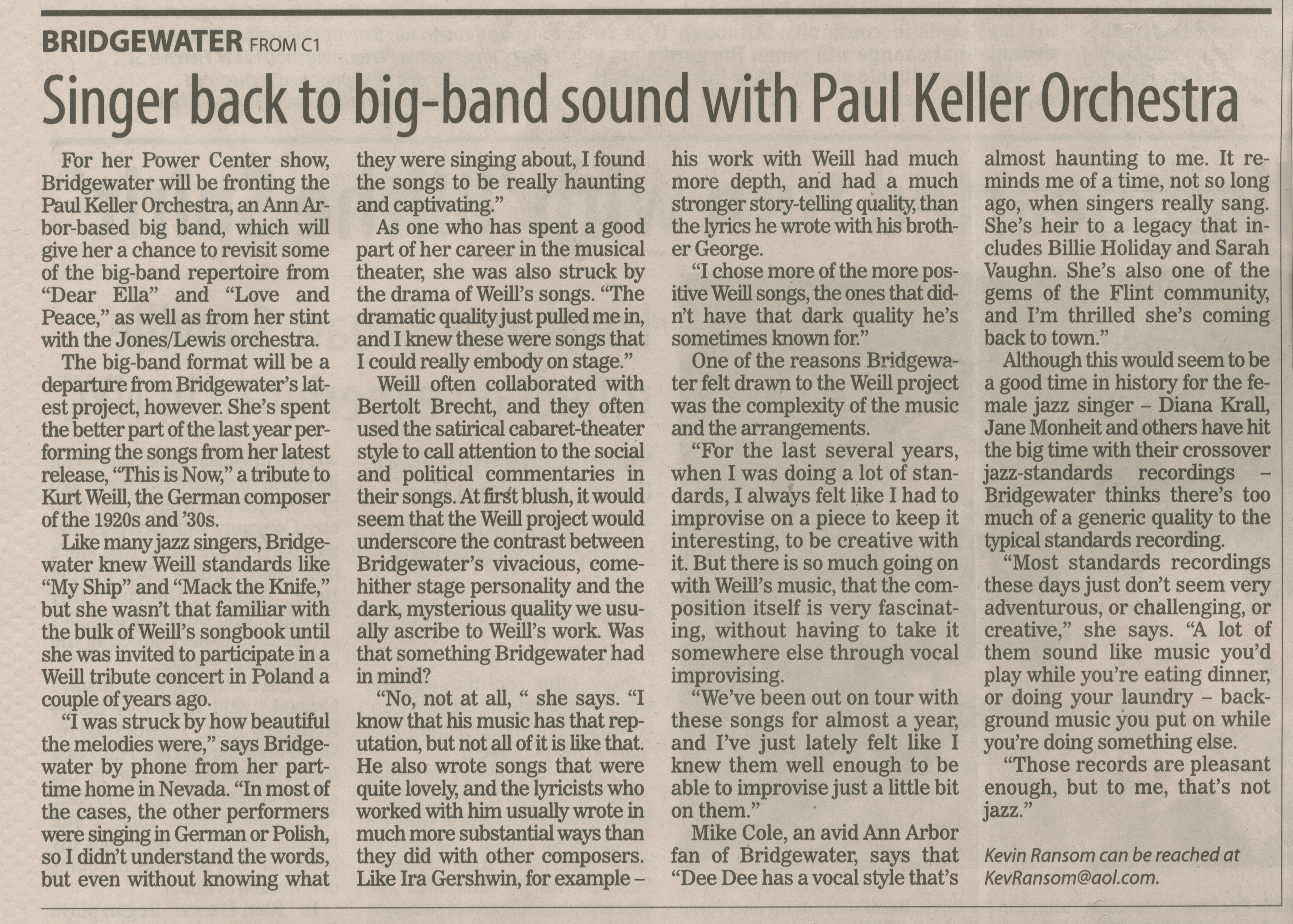 Big voice for a big band: It's Dee Dee

Bridgewater brings her jazzy style to the Power Center

Dee Dee Bridgewater has come a long way since her days as a fledgling singer growing up in Flint. She landed her first professional gigs as a teenager before moving away in 1968 at age 18.

In the years since, she’s wowed audiences in a touring production of “Sophisticated Ladies” and “Cabaret” (as Sally), won a Tony for her performance in “The Wiz,” portrayed Billie Holliday in “Lady Day” and won a Grammy for “Dear Ella,” her 1997 tribute to Ella Fitzgerald.

Bridgewater, who comes to the Power Center on Wednesday, has also performed with the Thad Jones/Mel Lewis orchestra -- which as long been known as one of the greatest big bands in jazz. For many years, she lived in Paris, where she became a jazz superstar, performing mostly in Europe -- and then scored a creative triumph with “Love and Peace,” a 1995 tribute to Horace Silver that won her a whole new audience in the United States.

Singer back to big-band sound with Paul Keller Orchestra

For her Power Center show, Bridgewater will be fronting the Paul Keller Orchestra, an Ann Arbor-based big band, which will give her a chance to revisit some of the big-band repertoire from "Dear Ella" and "Love and Peace" as well as from her stint with the Jones/Lewis orchestra.

The big-band format will be a departure from Bridgewater's latest project, however. She's spent the better part of the last year performing the songs from her latest release, "This is Now," a tribute to Kurt Weill, the German composer of the 1920's and '30s.

Like many jazz singers, Bridgewater knew Weill standards like "My Ship" and "Mack the Knife" but she wasn't familiar with the bulk of Weill's songbook until she was invited to participate in a Weill tribute concert in Poland a couple of years ago.

"I was struck by how beautiful the melodies were," says Bridgewater by phone from her part-time home in Nevada. "In most of the cases, the other performers were singing in German or Polish, so I didn't understand the words, but even without knowing what they were singing about, I found the songs to be really haunting and captivating."

As one who spent a good part of her career in the musical theater, she was struck by the drama of Weill's songs. "The dramatic quality just pulled me in, and I knew these were songs that I could really embody on stage."

Weill often collaborated with Bertolt Brecht, and they often used the satirical cabaret-theater style to call attention to the social and political commentaries in their songs. At first blush, it would seem that the Weill project would underscore the contrast between Bridgewater's vivacious, come-hither stage personality and the dark, mysterious quality we usually ascribe to Weill's work. Was that something Bridgewater had in mind?

"No, not at all," she says. "I know that his music has that reputation, but not all of it is like that. He also wrote songs that were quite lovely, and the lyricists who worked with him usually wrote in much more substantial ways than they did with other composers. Like Ira Gershwin, for example -- his work with Weill had much more depth, and had a much stronger story-telling quality, than the lyrics he wrote with his brother George.

"I chose more of the positive Weill songs, the ones that didn't have that dark quality he's sometimes known for."

One of the reasons Bridgewater felt drawn to the Weill project was the complexity of the music and the arrangements.

"For the last several years, when I was doing a lot of standards, I always felt like I had to improvise on a piece to keep it interesting, to be creative with it. But there is so much going on with Weill's music, that the composition itself is very fascinating, without having to take it somewhere else through vocal improvising.

"We've been out on tour with these songs for almost a year, and I've just lately felt like I knew them well enough to be able to improvise just a little bit on them."

Mike Cole, an avid Ann Arbor fan of Bridgewater, says that "Dee Dee has a vocal style that's almost haunting to me. It reminds me of a time, not so long ago, when singers really sang. She's heir to a legacy that includes Billie Holiday and Sarah Vaughn. She's also one of the gems of the Flint community, and I'm thrilled she's coming back to town."

Although this would seem to be a good time in history for the female jazz singer -- Diana Krall, Jane Monheit and others have hit the bit time with their crossover jazz-standards recordings -- Bridgewater thinks there's too much of a generic quality to the typical standards recording.

Most standards recordings these days just don't seem very adventurous, or challenging, or creative," she says. "A lot of them sound like music you'd play while you're eating dinner, or doing your laundry -- background music you put on while you're doing something else.

"Those records are pleasant enough, but to me, that's not jazz."

Kevin Ransom can be reached at KevRansom@aol.com