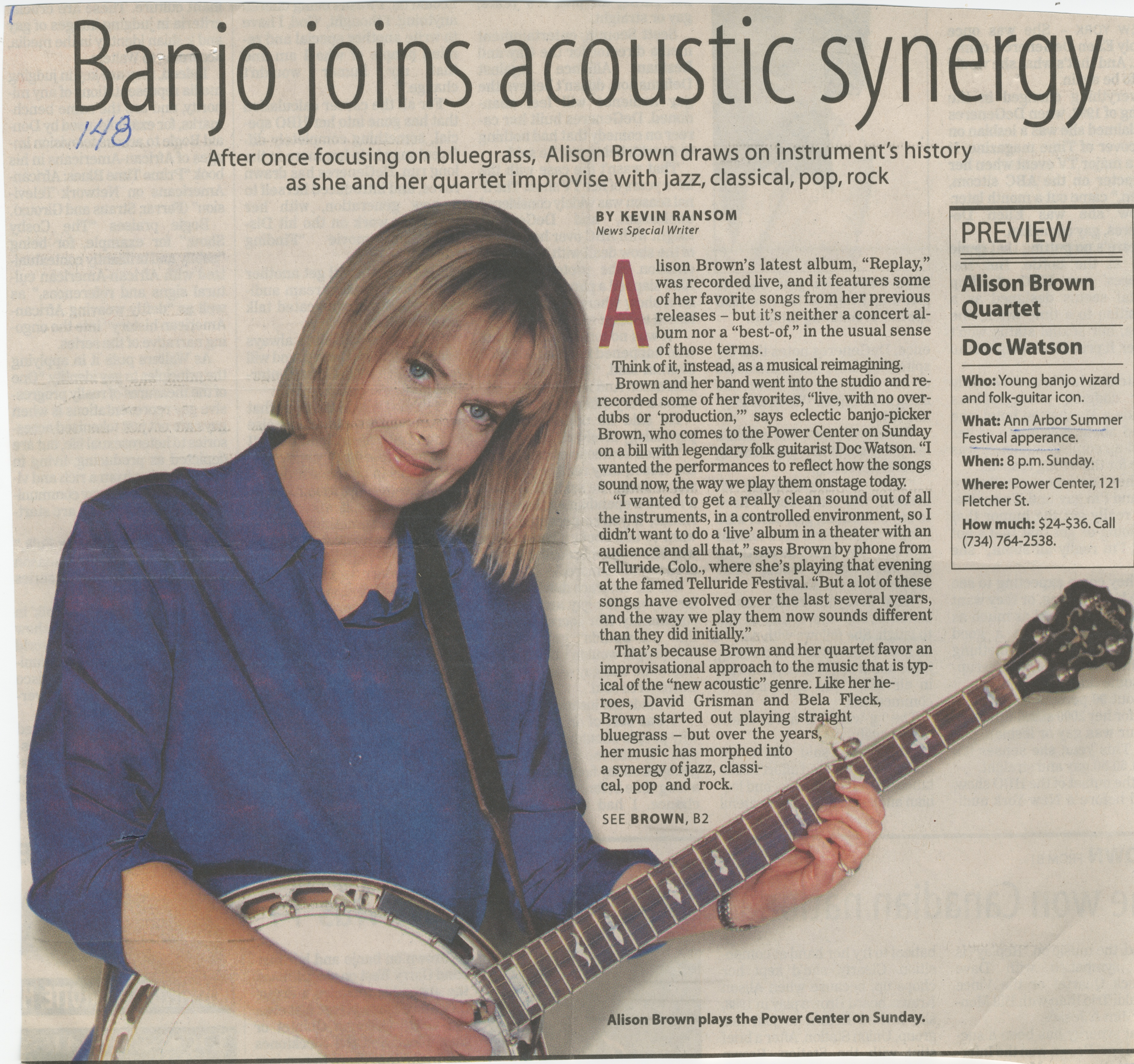 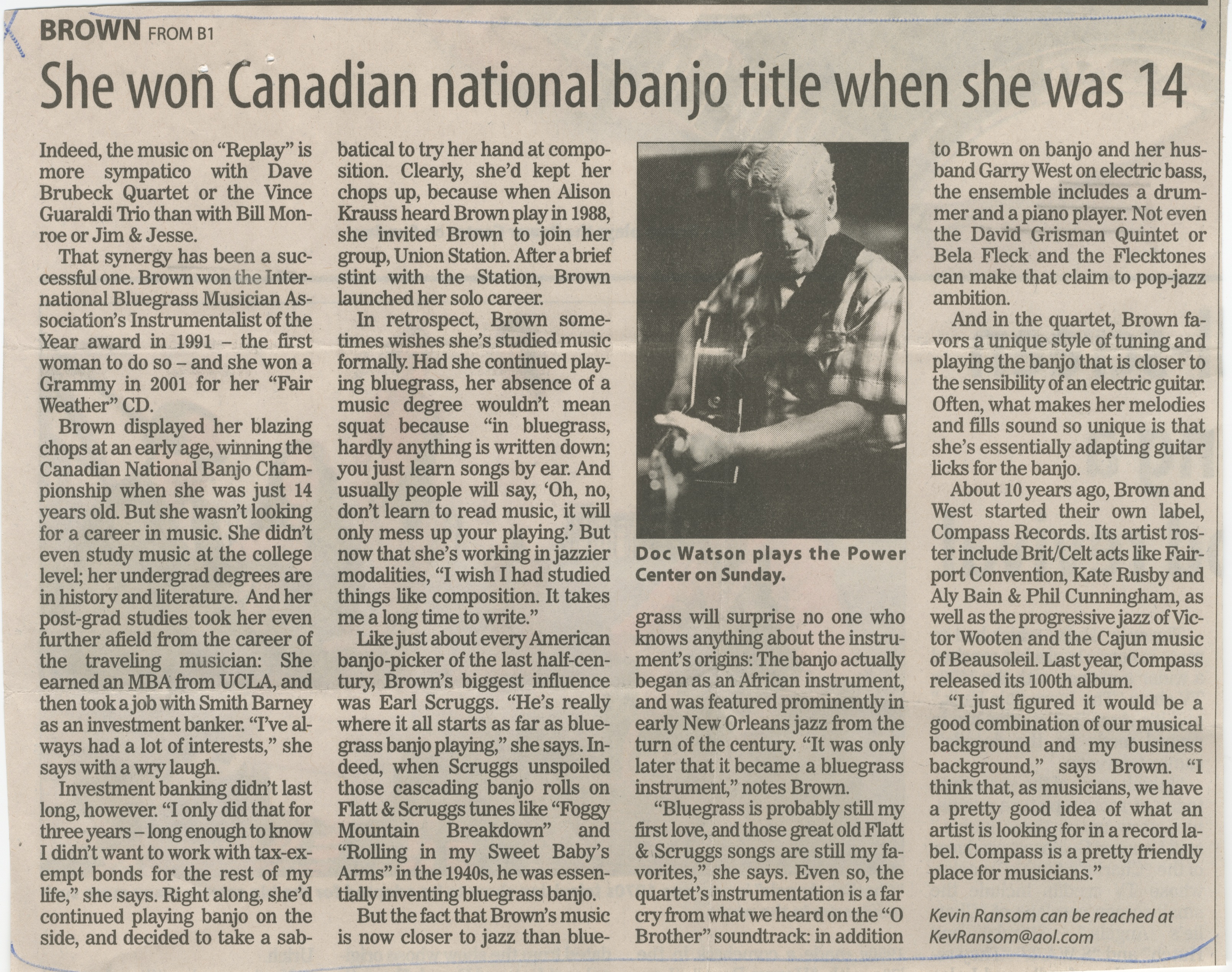 After once focusing on bluegrass, Alison Brown draws on instrument's history as she and her quartet improvise with jazz, classical, pop, rock

Alison Brown's latest album, "Replay," was recorded live, and it features some of her favorite songs from her previous releases - but it's neither a concert album nor a "best-of," in the usual sense of those terms.

Think of it, instead, as a musical reimagining.

Brown and her band went into the studio and rerecorded some of her favorites, "live, with no overdubs or 'production,'" says eclectic banjo-picker Brown, who comes to the Power Center on Sunday on a bill with legendary folk guitarist Doc Watson. "I wanted the performances to reflect how the songs sound now, the way we play them onstage today.

"I wanted to get a really clean sound out of all the instruments, in a controlled environment, so I didn't want to do a 'live' album in a theater with an audience and all that," says Brown by phone from Telluride, Colo., where she's playing that evening at the famed Telluride Festival. "But a lot of these songs have evolved over the last several years, and the way we play them now sounds different than they did initially."

That's because Brown and her quartet favor an improvisational approach to the music that is typical of the "new acoustic" genre. Like her heroes, David Grisman and Bela Fleck, Brown started out playing straight bluegrass - but over the years, her music has morphed into a synergy of jazz, classical, pop and rock.

She won Canadian national banjo title when she was 14

Indeed, the music on "Replay" is more sympatico with Dave Brubeck Quartet or the Vince Guaraldi Trio than with Bill Monroe or Jim & Jesse.

That synergy has been a successful one. Brown won the International Bluegrass Musician Association's Instrumentalist of the Year award in 1991 - the first woman to do so - and she won a Grammy in 2001 for her "Fair Weather" CD.

Brown displayed her blazing chops at an early age, winning the Canadian National Banjo Championship when she was just 14 years old. But she wasn't looking for a career in music. She didn't even study music at the college level; her undergrad degrees are in history and literature. And her post-grad studies took her even further afield from the career of the traveling musician: She earned an MBA from UCLA, and then took a job with Smith Barney as an investment banker. "I've always had a lot of interests," she says with a wry laugh.

Investment banking didn't last long, however. "I only did that for three years - long enough to know I didn't want to work with tax-exempt bonds for the rest of my life," she says. Right along, she'd continued playing banjo on the side, and decided to take a sabbatical to try her hand at composition. Clearly, she'd kept her cops up, because when Alison Krauss heard Brown play in 1988, she invited Brown to join her group, Union Station. After a brief stint with the Station, Brown launched her solo career.

In retrospect, Brown sometimes wishes she's studied music formally. Had she continued playing bluegrass, her absence of a music degree wouldn't mean squat because "in bluegrass, hardly anything is written down; you just learn songs by ear. And usually people will say, 'Oh, no, don't learn to read music, it will only mess up your playing.' But now that she's working in jazzier modalities, "I wish I had studied things like composition. It takes me a long time to write."

Like just about every American banjo-picker of the last half-century, Brown's biggest influence was Earl Scruggs. "He's really where it all starts as far as bluegrass banjo playing," she says. Indeed, when Scruggs unspoiled those cascading banjo rolls on Flatt & Scruggs tunes like "Foggy Mountain Breakdown" and "Rolling in my Sweet Baby's Arms" in the 1940s, he was essentially inventing bluegrass banjo.

But the fact that Brown's music is now closer to jazz than bluegrass will surprise no one who knows anything about the instrument's origins: The banjo actually began as an African instrument, and was featured prominently in early New Orleans jazz from the turn of the century. "It was only later that it became a bluegrass instrument," notes Brown.

"Bluegrass is probably still my first love, and those great old Flatt & Scruggs songs are still my favorites," she says. Even so, the quartet's instrumentation is a far cry from what we heard on the "O Brother" soundtrack: in addition to Brown on banjo and her husband Garry West n electric bass, the ensemble includes a drummer and a piano player. Not even the David Grisman Quintet or Bela Fleck and the Flecktones can make that claim to pop-jazz ambition.

And in the quartet, Brown Favors a unique style of tuning and playing the banjo that is closer to the sensibility of an electric guitar. Often, what makes her melodies and fills sound so unique is that she's essentially adapting guitar licks for the banjo.

About 10 years ago, Brown and West started their own label, Compass Records. Its artist roster include Brit/Celt acts like Fairport Convention, Kate Rusby and Aly Bain & Phil Cunningham, as well as the Progressive jazz of Victor Wooten and the Cajun music of Beausoleil. Last year, Compass released its 100th album.

"I just figured it would be a good combination of our musical background and my business background," says Brown. "I think that, as musicians, we have a pretty good idea of what an artist is looking for in a record label. Compass is a pretty friendly place for musicians."

Kevin Ransom can be reached at KevRansom@aol.com