Baryshnikov lives up to his legend 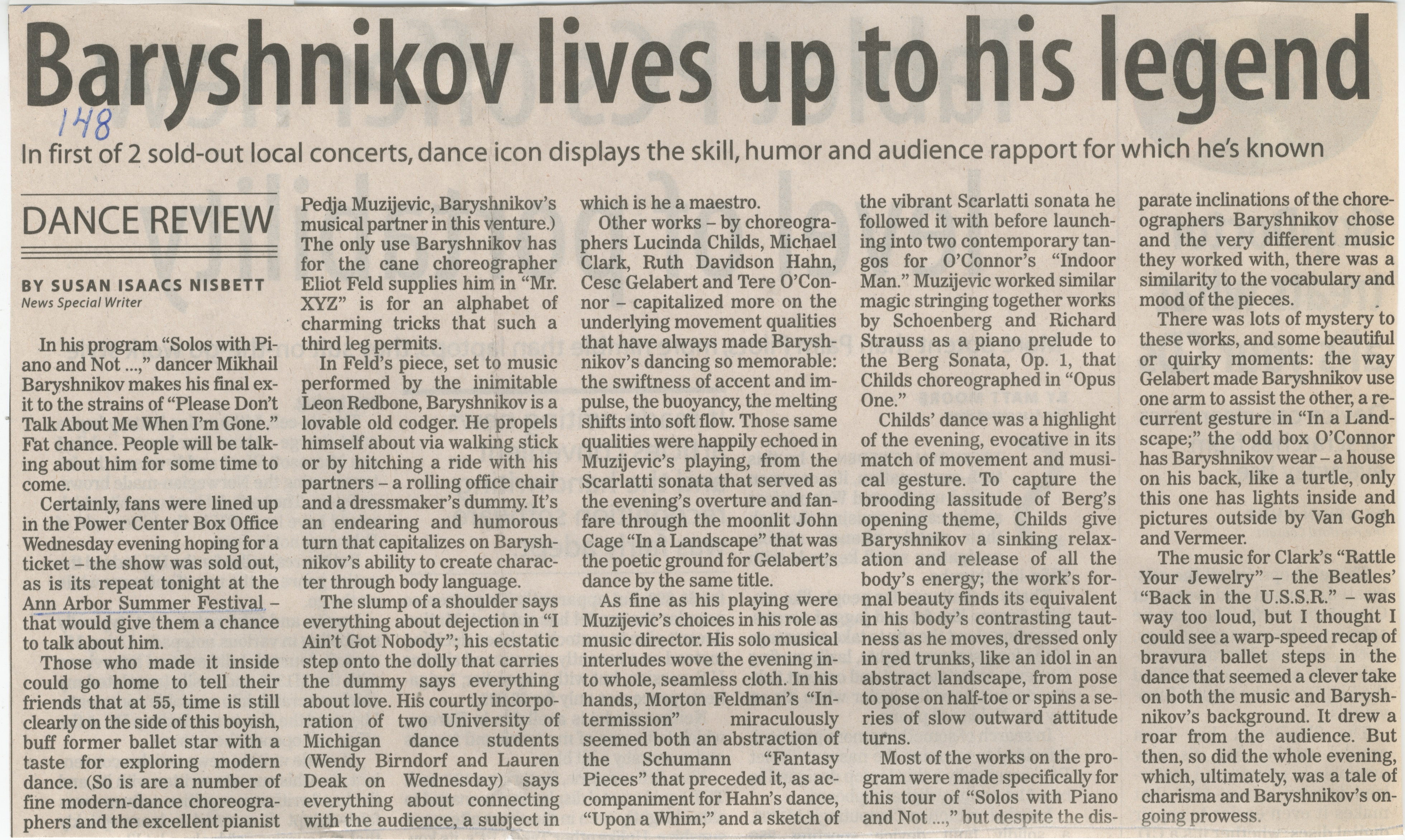 ﻿Baryshnikov lives up to his legend

In first of 2 sold-out local concerts, dance icon displays the skill, humor and audience rapport for which he's known

In his program “Solos with Piano and Not...," dancer Mikhail Baryshnikov makes his final exit to the strains of “Please Don’t Talk About Me When I’m Gone.” Fat chance. People will be talking about him for some time to come.

Certainly, fans were lined up in the Power Center Box Office Wednesday evening hoping for a ticket - the show was sold out, as is its repeat tonight at the Ann Arbor Summer Festival - that would give them a chance to talk about him.

Those who made it inside could go home to tell their friends that at 55, time is still clearly on the side of this boyish, buff former ballet star with a taste for exploring modern dance. (So is are a number of fine modern-dance choreographers and the excellent pianist Pedja Muzijevic, Baryshnikov’s musical partner in this venture.) The only use Baryshnikov has for the cane choreographer Eliot Feld supplies him in “Mr. XYZ” is for an alphabet of charming tricks that such a third leg permits.

In Feld’s piece, set to music performed by the inimitable Leon Redbone, Baryshnikov is a lovable old codger. He propels himself about via walking stick or by hitching a ride with his partners - a rolling office chair and a dressmaker’s dummy. It’s an endearing and humorous turn that capitalizes on Baryshnikov’s ability to create character through body language.

Other works - by choreographers Lucinda Childs, Michael Clark, Ruth Davidson Hahn, Cesc Gelabert and Tere O’Connor - capitalized more on the underlying movement qualities that have always made Baryshnikov’s dancing so memorable: the swiftness of accent and impulse, the buoyancy, the melting shifts into soft flow. Those same qualities were happily echoed in Muzijevic’s playing, from the Scarlatti sonata that served as the evening’s overture and fanfare through the moonlit John Cage “In a Landscape” that was the poetic ground for Gelabert’s dance by the same title.

As fine as his playing were Muzijevic’s choices in his role as music director. His solo musical interludes wove the evening into whole, seamless cloth. In his hands, Morton Feldman’s “Intermission” miraculously seemed both an abstraction of the Schumann “Fantasy Pieces” that preceded it, as accompaniment for Hahn’s dance, “Upon a Whim;” and a sketch of the vibrant Scarlatti sonata he followed it with before launching into two contemporary tangos for O’Connor’s “Indoor Man.” Muzijevic worked similar magic stringing together works by Schoenberg and Richard Strauss as a piano prelude to the Berg Sonata, Op. 1, that Childs choreographed in “Opus One.”

Childs’ dance was a highlight of the evening, evocative in its match of movement and musical gesture. To capture the brooding lassitude of Berg’s opening theme, Childs give Baryshnikov a sinking relaxation and release of all the body’s energy; the work’s formal beauty finds its equivalent in his body’s contrasting tautness as he moves, dressed only in red trunks, like an idol in an abstract landscape, from pose to pose on half-toe or spins a series of slow outward attitude turns.

Most of the works on the program were made specifically for this tour of “Solos with Piano and Not...,” but despite the disparate inclinations of the choreographers Baryshnikov chose and the very different music they worked with, there was a similarity to the vocabulary and mood of the pieces.

There was lots of mystery to these works, and some beautiful or quirky moments: the way Gelabert made Baryshnikov use one arm to assist the other, a recurrent gesture in “In a Landscape;” the odd box O’Connor has Baryshnikov wear - a house on his back, like a turtle, only this one has lights inside and pictures outside by Van Gogh and Vermeer.

The music for Clark’s “Rattle Your Jewelry” - the Beatles’ “Back in the U.S.S.R.” - was way too loud, but I thought I could see a warp-speed recap of bravura ballet steps in the dance that seemed a clever take on both the music and Baryshnikov’s background. It drew a roar from the audience. But then, so did the whole evening, which, ultimately, was a tale of charisma and Baryshnikov’s ongoing prowess.