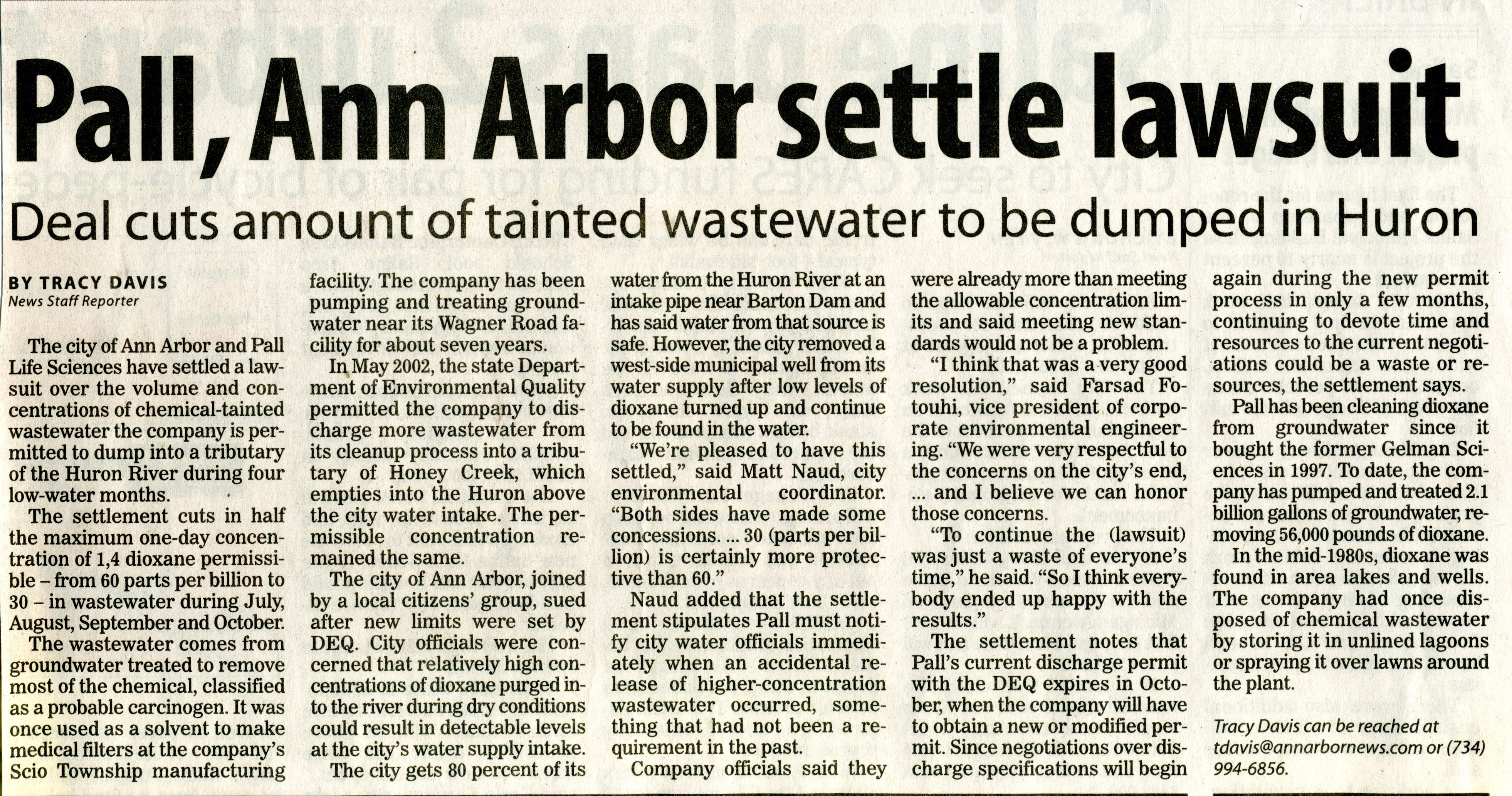 Deal cuts amount of tainted wastewater to be dumped in Huron

The city of Ann Arbor and Pall Life Sciences have settled a lawsuit over the volume and concentrations of chemical-tainted wastewater the company is permitted to dump into a tributary of the Huron River during four low-water months.

The settlement cuts in half the maximum one-day concentration of 1,4 dioxane permissible - from 60 parts per billion to 30 - in wastewater during July, August, September and October.

The wastewater comes from groundwater treated to remove most of the chemical, classified as a probable carcinogen. It was once used as a solvent to make medical filters at the company’s Scio Township manufacturing facility. The company has been pumping and treating ground-water near its Wagner Road facility for about seven years.

In May 2002, the state Department of Environmental Quality permitted the company to discharge more wastewater from its cleanup process into a tributary of Honey Creek, which empties into the Huron above the city water intake. The permissible concentration remained the same.

The city of Ann Arbor, joined by a local citizens’ group, sued after new limits were set by DEQ. City officials were concerned that relatively high concentrations of dioxane purged into the river during dry conditions could result in detectable levels at the city’s water supply intake.

The city gets 80 percent of its water from the Huron River at an intake pipe near Barton Dam and has said water from that source is safe. However, the city removed a west-side municipal well from its water supply after low levels of dioxane turned up and continue to be found in the water.

“We’re pleased to have this settled,” said Matt Naud, city environmental coordinator. “Both sides have made some concessions.... 30 (parts per billion) is certainly more protective than 60.”

Naud added that the settlement stipulates Pall must notify city water officials immediately when an accidental release of higher-concentration wastewater occurred, something that had not been a requirement in the past.

Company officials said they were already more than meeting the allowable concentration limits and said meeting new standards would not be a problem.

“I think that was a very good resolution,” said Farsad Fo-touhi, vice president of corporate environmental engineering. “We were very respectful to the concerns on the city’s end, ... and I believe we can honor those concerns.

“To continue the (lawsuit) was just a waste of everyone’s time,” he said. “So I think everybody ended up happy with the results.”

The settlement notes that Pall’s current discharge permit with the DEQ expires in October, when the company will have to obtain a new or modified permit. Since negotiations over discharge specifications will begin again during the new permit process in only a few months, continuing to devote time and resources to the current negotiations could be a waste of resources, the settlement says.

Pall has been cleaning dioxane from groundwater since it bought the former Gelman Sciences in 1997. To date, the company has pumped and treated 2.1 billion gallons of groundwater, removing 56,000 pounds of dioxane.

In the mid-1980s, dioxane was found in area lakes and wells. The company had once disposed of chemical wastewater by storing it in unlined lagoons or spraying it over lawns around the plant.