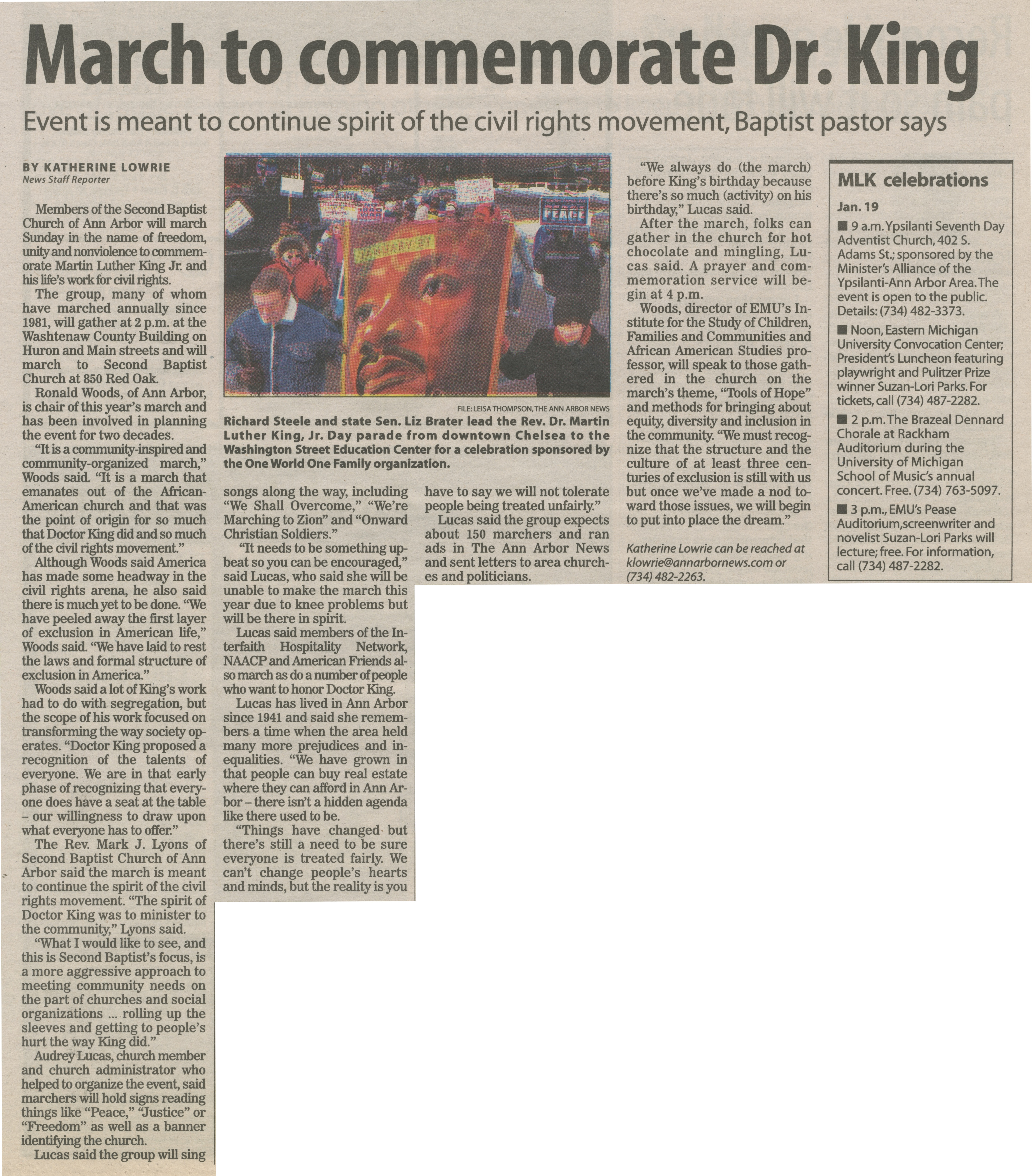 Members of the Second Baptist Church of Ann Arbor will march Sunday in the name of freedom, unity and nonviolence to commemorate Martin Luther King Jr. and his life’s work for civil rights.

The group, many of whom have marched annually since 1981, will gather at 2 p.m. at the Washtenaw County Building on Huron and Main streets and will march to Second Baptist Church at 850 Red Oak.

Ronald Woods, of Ann Arbor, is chair of this year’s march and has been involved in planning the event for two decades.

“It is a community-inspired and community-organized march,” Woods said. “It is a march that emanates out of the African-American church and that was the point of origin for so much that Doctor King did and so much of the civil rights movement”

Woods said a lot of King’s work had to do with segregation, but the scope of his work focused on transforming the way society operates. “Doctor King proposed a recognition of the talents of everyone. We are in that early phase of recognizing that everyone does have a seat at the table - our willingness to draw upon what everyone has to offer.”

The Rev. Mark J. Lyons of Second Baptist Church of Ann Arbor said the march is meant to continue the spirit of the civil rights movement. “The spirit of Doctor King was to minister to the community,” Lyons said.

“What I would like to see, and this is Second Baptist’s focus, is a more aggressive approach to meeting community needs on the part of churches and social organizations ... rolling up the sleeves and getting to people’s hurt the way King did.”

Audrey Lucas, church member and church administrator who helped to organize the event, said marchers will hold signs reading things like “Peace,” “Justice” or “Freedom” as well as a banner identifying the church.

Lucas said the group will sing songs along the way, including “We Shall Overcome,” “We’re Marching to Zion” and “Onward Christian Soldiers.”

“It needs to be something upbeat so you can be encouraged,” said Lucas, who said she will be unable to make the march this year due to knee problems but will be there in spirit.

Lucas said members of the Interfaith Hospitality Network, NAACP and American Friends also march as do a number of people who want to honor Doctor King.

Lucas has lived in Ann Arbor since 1941 and said she remembers a time when the area held many more prejudices and inequalities. “We have grown in that people can buy real estate where they can afford in Ann Arbor - there isn’t a hidden agenda like there used to be.

“Things have changed but there’s still a need to be sure everyone is treated fairly. We can’t change people’s hearts and minds, but the reality is you have to say we will not tolerate people being treated unfairly.”

Lucas said the group expects about 150 marchers and ran ads in The Ann Arbor News and sent letters to area churches and politicians.

“We always do (the march) before King’s birthday because there’s so much (activity) on his birthday,” Lucas said.

After the march, folks can gather in the church for hot chocolate and mingling, Lucas said. A prayer and commemoration service will begin at 4 p.m.

Woods, director of EMU’s Institute for the Study of Children, Families and Communities and African American Studies professor, will speak to those gathered in the church on the march’s theme, “Tools of Hope” and methods for bringing about equity, diversity and inclusion in the community. “We must recognize that the structure and the culture of at least three centuries of exclusion is still with us but once we’ve made a nod toward those issues, we will begin to put into place the dream.”