Civic Does Right By 'Fiddler On The Roof' 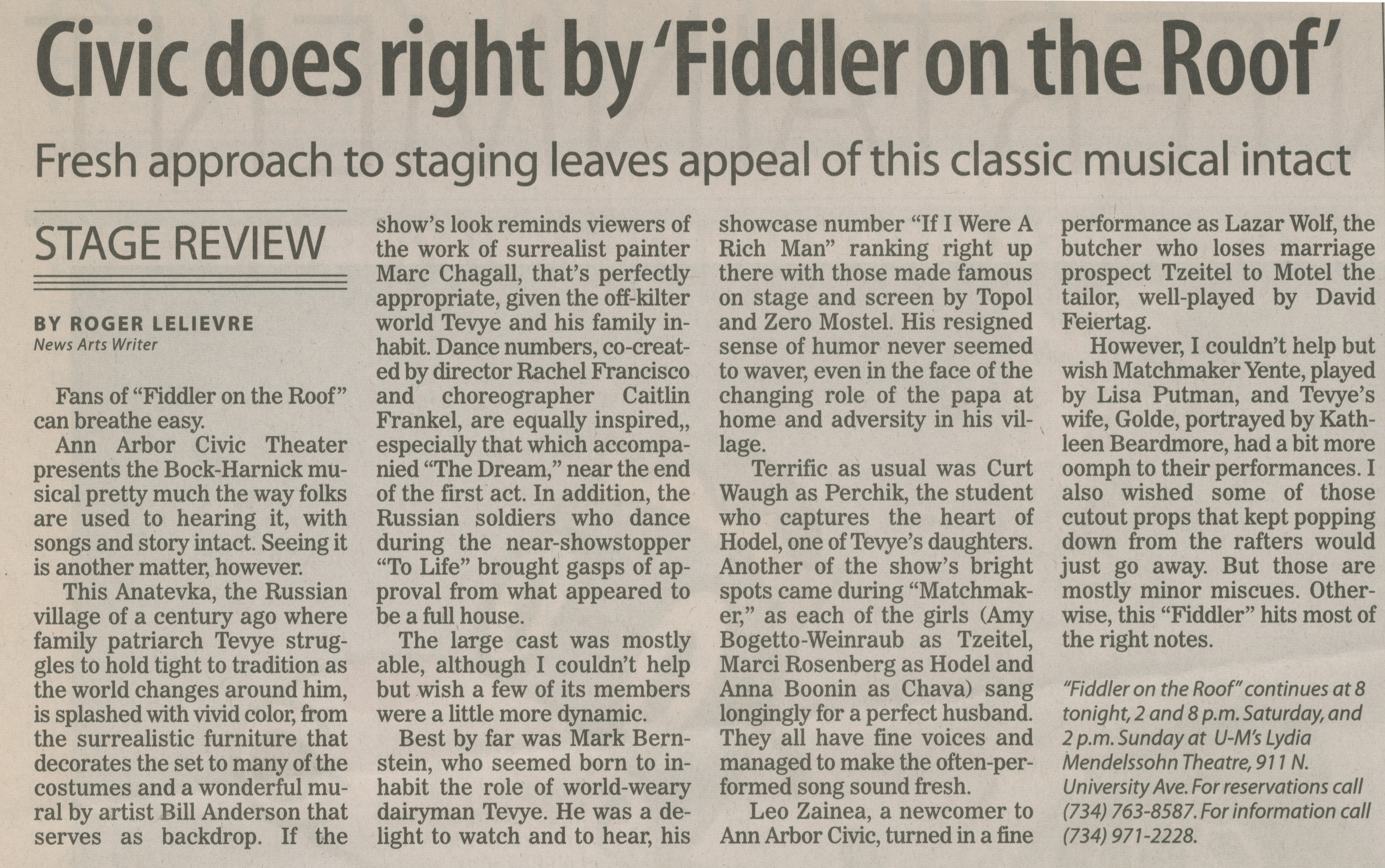 ﻿Civic does right by 'Fiddler on the Roof'

Fans of “Fiddler on the Roof” can breathe easy.

Ann Arbor Civic Theater presents the Bock-Harnick musical pretty much the way folks are used to hearing it, with songs and story intact. Seeing it is another matter, however.

This Anatevka, the Russian village of a century ago where family patriarch Tevye struggles to hold tight to tradition as the world changes around him, is splashed with vivid color, from the surrealistic furniture that decorates the set to many of the costumes and a wonderful mural by artist Bill Anderson that serves as backdrop. If the

show’s look reminds viewers of the work of surrealist painter Marc Chagall, that’s perfectly appropriate, given the off-kilter world Tevye and his family inhabit. Dance numbers, co-created by director Rachel Francisco and choreographer Caitlin Frankel, are equally inspired,, especially that which accompanied “The Dream,” near the end of the first act. In addition, the Russian soldiers who dance during the near-showstopper “To Life” brought gasps of approval from what appeared to be a full house.

The large cast was mostly able, although I couldn’t help but wish a few of its members were a little more dynamic.

Best by far was Mark Bernstein, who seemed born to inhabit the role of world-weary dairyman Tevye. He was a delight to watch and to hear, his

showcase number “If I Were A Rich Man” ranking right up there with those made famous on stage and screen by Topol and Zero Mostel. His resigned sense of humor never seemed to waver, even in the face of the changing role of the papa at home and adversity in his village.

Terrific as usual was Curt Waugh as Perchik, the student who captures the heart of Hodel, one of Tevye’s daughters. Another of the show’s bright spots came during “Matchmaker,” as each of the girls (Amy Bogetto-Weinraub as Tzeitel, Marci Rosenberg as Hodel and Anna Boonin as Chava) sang longingly for a perfect husband. They all have fine voices and managed to make the often-performed song sound fresh.

Leo Zainea, a newcomer to Ann Arbor Civic, turned in a fine

performance as Lazar Wolf, the butcher who loses marriage prospect Tzeitel to Motel the tailor, well-played by David Feiertag.

However, I couldn’t help but wish Matchmaker Yente, played by Lisa Putman, and Tevye’s wife, Golde, portrayed by Kathleen Beardmore, had a bit more oomph to their performances. I also wished some of those cutout props that kept popping down from the rafters would just go away. But those are mostly minor miscues. Otherwise, this “Fiddler” hits most of the right notes.