Message Of Charity Wrapped In A Shawl 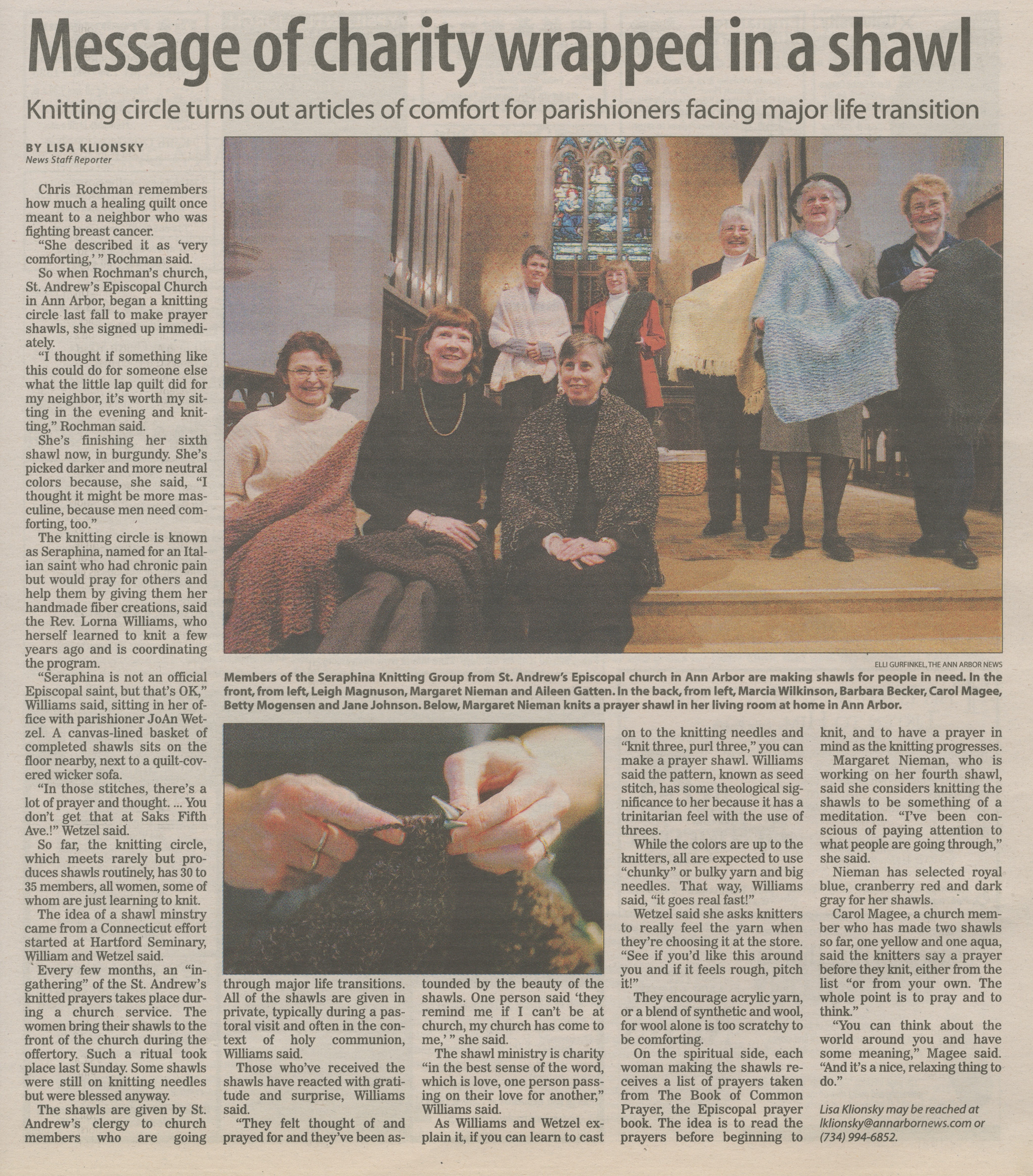 ﻿Message of charity wrapped in a shawl

Chris Rochman remembers how much a healing quilt once meant to a neighbor who was fighting breast cancer.

“She described it as ‘very comforting,’ ” Rochman said.

“I thought if something like this could do for someone else what the little lap quilt did for my neighbor, it’s worth my sitting in the evening and knitting,” Rochman said.

She’s finishing her sixth shawl now, in burgundy. She’s picked darker and more neutral colors because, she said, “I thought it might be more masculine, because men need comforting, too.”

The knitting circle is known as Seraphina, named for an Italian saint who had chronic pain but would pray for others and help them by giving them her handmade fiber creations, said the Rev. Lorna Williams, who herself learned to knit a few years ago and is coordinating the program.

“Seraphina is not an official Episcopal saint, but that’s OK,” Williams said, sitting in her office with parishioner JoAn Wetzel. A canvas-lined basket of completed shawls sits on the floor nearby, next to a quilt-covered wicker sofa.

“In those stitches, there’s a lot of prayer and thought.... You don’t get that at Saks Fifth Ave.!” Wetzel said.

So far, the knitting circle, which meets rarely but produces shawls routinely, has 30 to 35 members, all women, some of whom are just learning to knit.

The idea of a shawl minstry came from a Connecticut effort started at Hartford Seminary, William and Wetzel said.

Every few months, an “ingathering” of the St. Andrew’s knitted prayers takes place during a church service. The women bring their shawls to the front of the church during the offertory. Such a ritual took place last Sunday. Some shawls were still on knitting needles but were blessed anyway.

The shawls are given by St. Andrew’s clergy to church members who are going through major life transitions. All of the shawls are given in private, typically during a pastoral visit and often in the context of holy communion, Williams said.

Those who’ve received the shawls have reacted with gratitude and surprise, Williams said.

“They felt thought of and prayed for and they’ve been astounded by the beauty of the shawls. One person said ‘they remind me. if I can’t be at church, my church has come to me,’ ” she said.

The shawl ministry is charity “in the best sense of the word, which is love, one person passing on their love for another,” Williams said.

As Williams and Wetzel explain it, if you can learn to cast on to the knitting needles and “knit three, purl three,” you can make a prayer shawl. Williams said the pattern, known as seed stitch, has some theological significance to her because it has a trinitarian feel with the use of threes.

While the colors are up to the knitters, all are expected to use “chunky” or bulky yarn and big needles. That way, Wiliams said, “it goes real fast!”

Wetzel said she asks knitters to really feel the yarn when they’re choosing it at the store. “See if you’d like this around you and if it feels rough, pitch it!”

They encourage acrylic yarn, or a blend of synthetic and wool, for wool alone is too scratchy to be comforting.

On the spiritual side, each woman making the shawls receives a list of prayers taken from The Book of Common Prayer, the Episcopal prayer book. The idea is to read the prayers before beginning to knit, and to have a prayer in mind as the knitting progresses.

Margaret Nieman, who is working on her fourth shawl, said she considers knitting the shawls to be something of a meditation. “I’ve been conscious of paying attention to what people are going through,” she said.

Nieman has selected royal blue, cranberry red and dark gray for her shawls.

Carol Magee, a church member who has made two shawls so far, one yellow and one aqua, said the knitters say a prayer before they knit, either from the list “or from your own. The whole point is to pray and to think.”

“You can think about the world around you and have some meaning,” Magee said. “And it’s a nice, relaxing thing to do.”

Members of the Seraphina Knitting Group from St. Andrew's Episcopal church m Ann Arbor are making shawls for people in need. In the front, from left, Leigh Magnuson, Margaret Nieman and Aileen Gatten. In the back, from left, Marcia Wilkinson, Barbara Becker, Carol Magee, Betty Mogensen and Jane Johnson. Below, Margaret Nieman knits a prayer shawl in her living room at home in Ann Arbor.