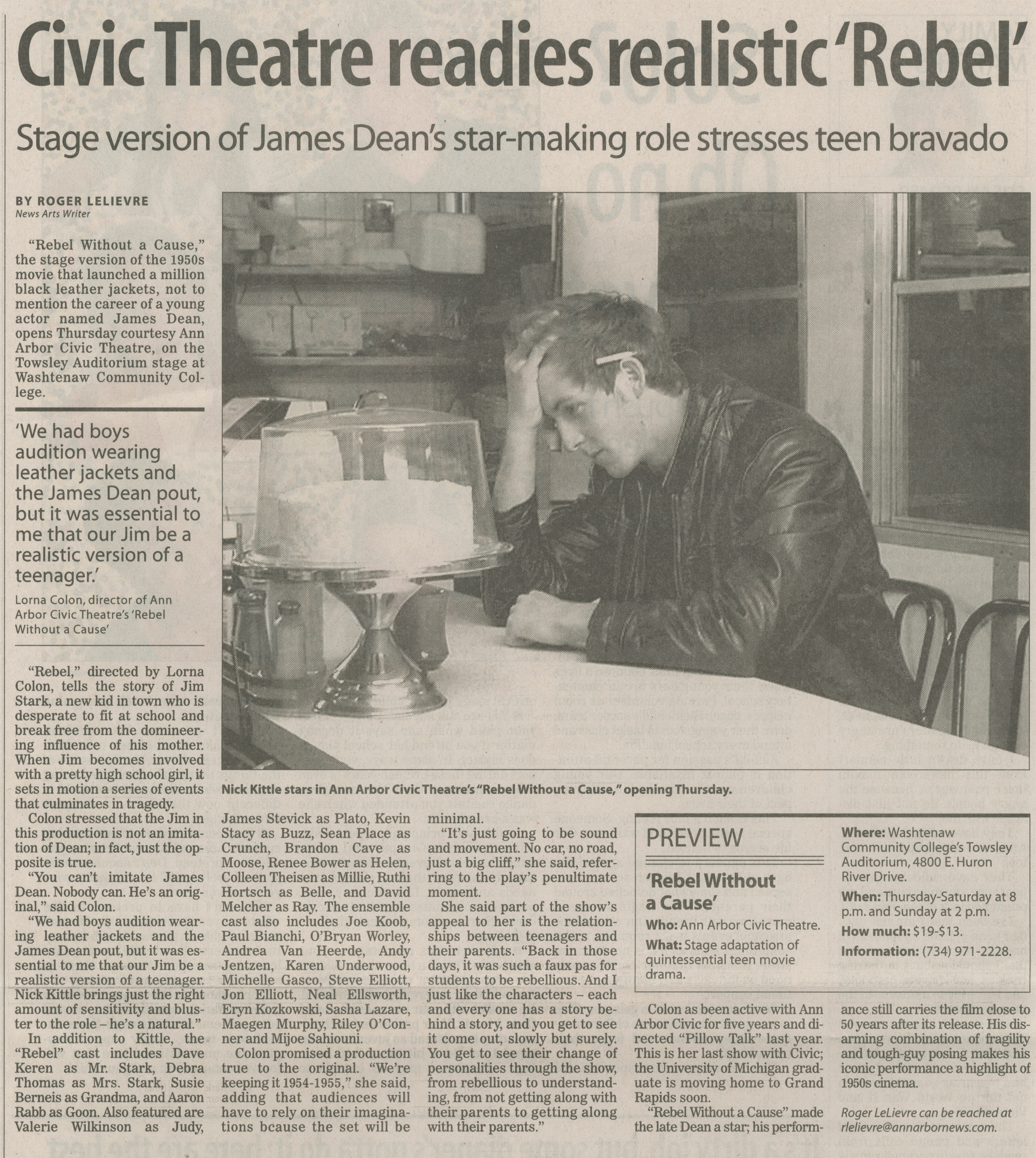 “Rebel Without a Cause,” the stage version of the 1950s movie that launched a million black leather jackets, not to mention the career of a young actor named James Dean, opens Thursday courtesy Ann Arbor Civic Theatre, on the Towsley Auditorium stage at Washtenaw Community College.

'We had boys audition wearing leather jackets and the James Dean pout, but it was essential to me that our Jim be a realistic version of a teenager/

Lorna Colon, director of Ann Arbor Civic Theatre's 'Rebel Without a Cause'

“Rebel,” directed by Lorna Colon, tells the story of Jim Stark, a new kid in town who is desperate to fit at school and break free from the domineering influence of his mother. When Jim becomes involved with a pretty high school girl, it sets in motion a series of events that culminates in tragedy.

Colon stressed that the Jim in this production is not an imitation of Dean; in fact, just the opposite is true.

“You can’t imitate James Dean. Nobody can. He’s an original,” said Colon.

“We had boys audition wearing leather jackets and the James Dean pout, but it was essential to me that our Jim be a realistic version of a teenager. Nick Kittle brings just the right amount of sensitivity and bluster to the role - he’s a natural.” In addition to Kittle, the “Rebel” cast includes Dave Keren as Mr. Stark, Debra Thomas as Mrs. Stark, Susie Bemeis as Grandma, and Aaron Rabb as Goon. Also featured are Valerie Wilkinson as Judy,

'Rebel Without a Cause'

Colon promised a production true to the original. “We’re keeping it 1954-1955,” she said, adding that audiences will have to rely on their imaginations because the set will be minimal.

“It’s just going to be sound and movement. No car, no road, just a big cliff,” she said, referring to the play’s penultimate moment.

She said part of the show’s appeal to her is the relationships between teenagers and their parents. “Back in those days, it was such a faux pas for students to be rebellious. And I just like the characters - each and every one has a story behind a story, and you get to see it come out, slowly but surely. You get to see their change of personalities through the show, from rebellious to understanding, from not getting along with their parents to getting along with their parents.”

Colon as been active with Ann Arbor Civic for five years and directed “Pillow Talk” last year. This is her last show with Civic; the University of Michigan graduate is moving home to Grand Rapids soon.

“Rebel Without a Cause” made the late Dean a star; his perform-
ance still carries the film close to 50 years after its release. His disarming combination of fragility and tough-guy posing makes his iconic performance a highlight of 1950s cinema.

Roger LeLievre can be reached at rlelievre@annarbornew5.com.