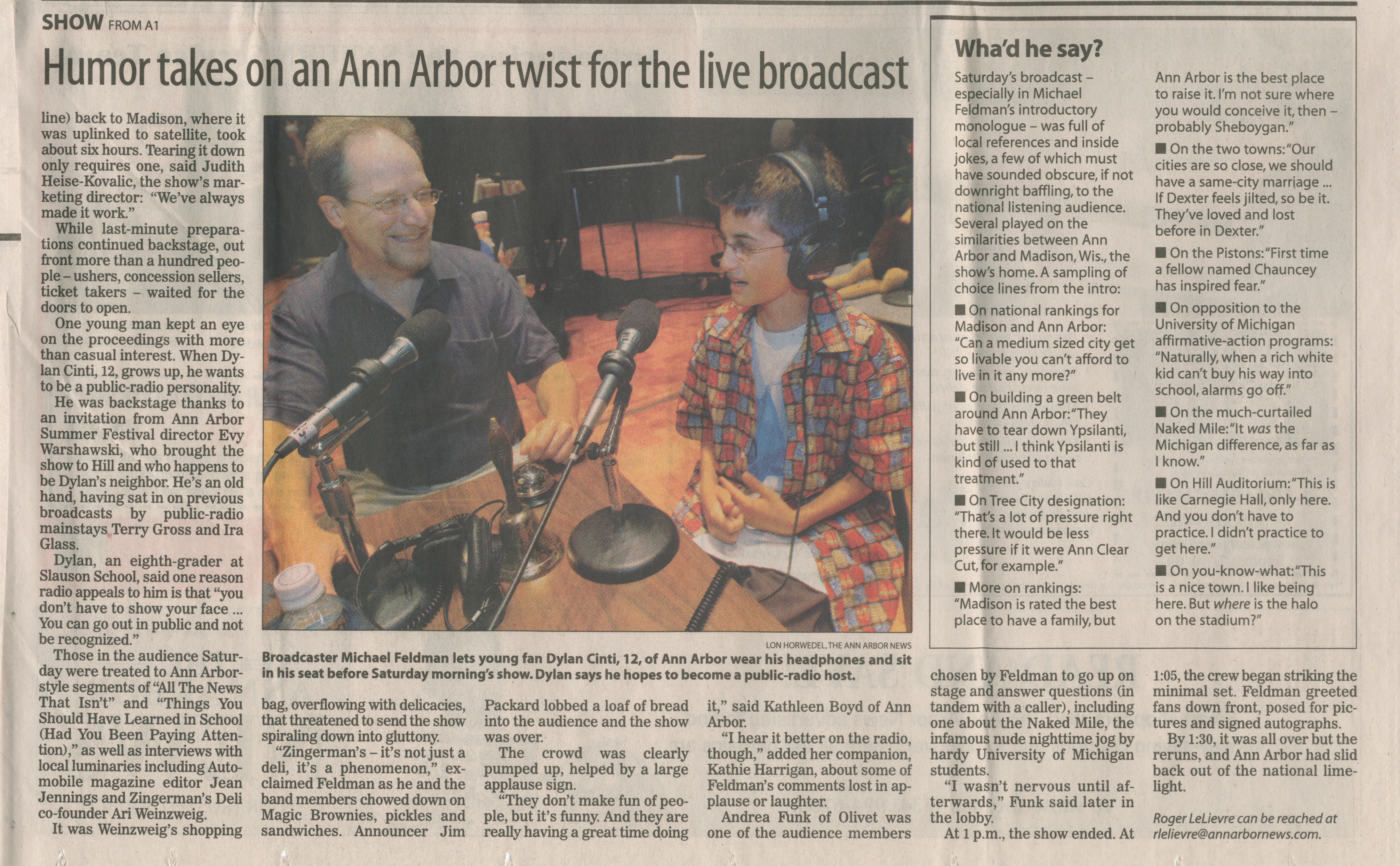 Who’da thunk creating a live radio show like “Whad’Ya Know” would look so simple? The prevailing calm Saturday was amazing, given that the two-hour public-radio quiz show - broadcast live to more than 1 million listeners from Ann Arbor’s Hill Auditorium - threatened at one point to degenerate into a food free-for-all.

Isn’t it funny how a loaf of rye resembles a football?

And did you ever notice how hard it is for a talk-show host to do an interview with his mouth full?

Work on the show began weeks ago, with staff lining up the guests and arranging transportation and lodging. Local preparations started Thursday with the arrival of a five-member technical crew plus nine or 10 cases of equipment, including a 700-pound audio mixing board, trucked in from the show’s Madison, Wis., home base.

Chaos would have been understood and forgiven. But as the minutes before air time evaporated, no one looked the slightest bit overwhelmed.

“I’m like a duck - calm on the outside but paddling like mad beneath the surface,” said on-site production manager Doug Edwards.

Setting up the electronics to mix the sound, screen callers and send the signal (via ISDN

Humor takes on an Ann Arbor twist for the live broadcast

Saturday's broadcast - especially in Michael Feldman's introductory monologue - was full of local references and inside jokes, a few of which must have sounded obscure, if not downright baffling, to the national listening audience. Several played on the similarities between Ann Arbor and Masion, Wis., the show's home. A sampling of choice lines from the intro:

line) back to Madison, where it was uplinked to satellite, took about six hours. Tearing it down only requires one, said Judith Heise-Kovalic, the show's marketing director: "We've always made it work."

While last-minute preparations continued backstage, out front more than a hundred people - ushers, concession sellers, ticket takers - waited for the doors to open.

One young man kept an eye on the proceedings with more than casual interest. When Dylan Cinti, 12, grows up, he wants to be a public-radio personality.

He was backstage thanks to an invitation from Ann Arbor Summer Festival director Evy Warshawski, who brought the show to Hill and who happens to be Dylan's neighbor. He's an old hand, having sat in on previous broadcasts by public-radio mainstays Terry Gross and Ira Glass.

Dylan, an eighth-grader at Slauson School, said one reason radio appeals to him is that "you don't have to show your face... You can go out in public and not be recognized."

Those in the audience Saturday were treated to Ann Arbor-style segments of "All the News That Isn't" and "Things You Should Have Learned in School (Had You Been Paying Attention)," as well as interviews with local luminaries including Automobile magazine editor Jean Jennings and Zingerman's Deli co-founder Ari Weinzweig.

It was Weinzweig's shopping bag, overflowing with delicacies, that threatened to send the show spiraling down into gluttony.

"Zingerman's - it's not just a deli, it's a phenomenon," exclaimed Feldman as he and the band members chowed down on Magic Brownies, pickles and sandwiches. Announcer Jim Packard lobbed a loaf of bread into the audience and the show was over.

The crowd was clearly pumped up, helped by a large applause sign.

"They don't make fun of people, but it's funny. And they are really having a great time doing it," said Kathleen Boyd of Ann Arbor.

"I hear it better on the radio, though," added her companion, Kathie Harrigan, about some of Feldman's comments lost in applause or laughter.

Andrea Funk of Olivet was one of the audience members chosen by Feldman to go up on stage and answer questions (in tandem with a caller), including one about the Naked Mile, the infamous nude nighttime jog by hardy University of Michigan students.

"I wasn't nervous until afterwards," Funk said later in the lobby.

At 1 p.m., the show ended. At 1:05, the crew began striking the minimal set. Feldman greeted fans down front, posed for pictures and signed autographs.

By 1:30, it was all over but the reruns, an Ann Arbor had slid back out the national limelight.

Roger LeLievre can be reached at rlelievre@annarbornews.com