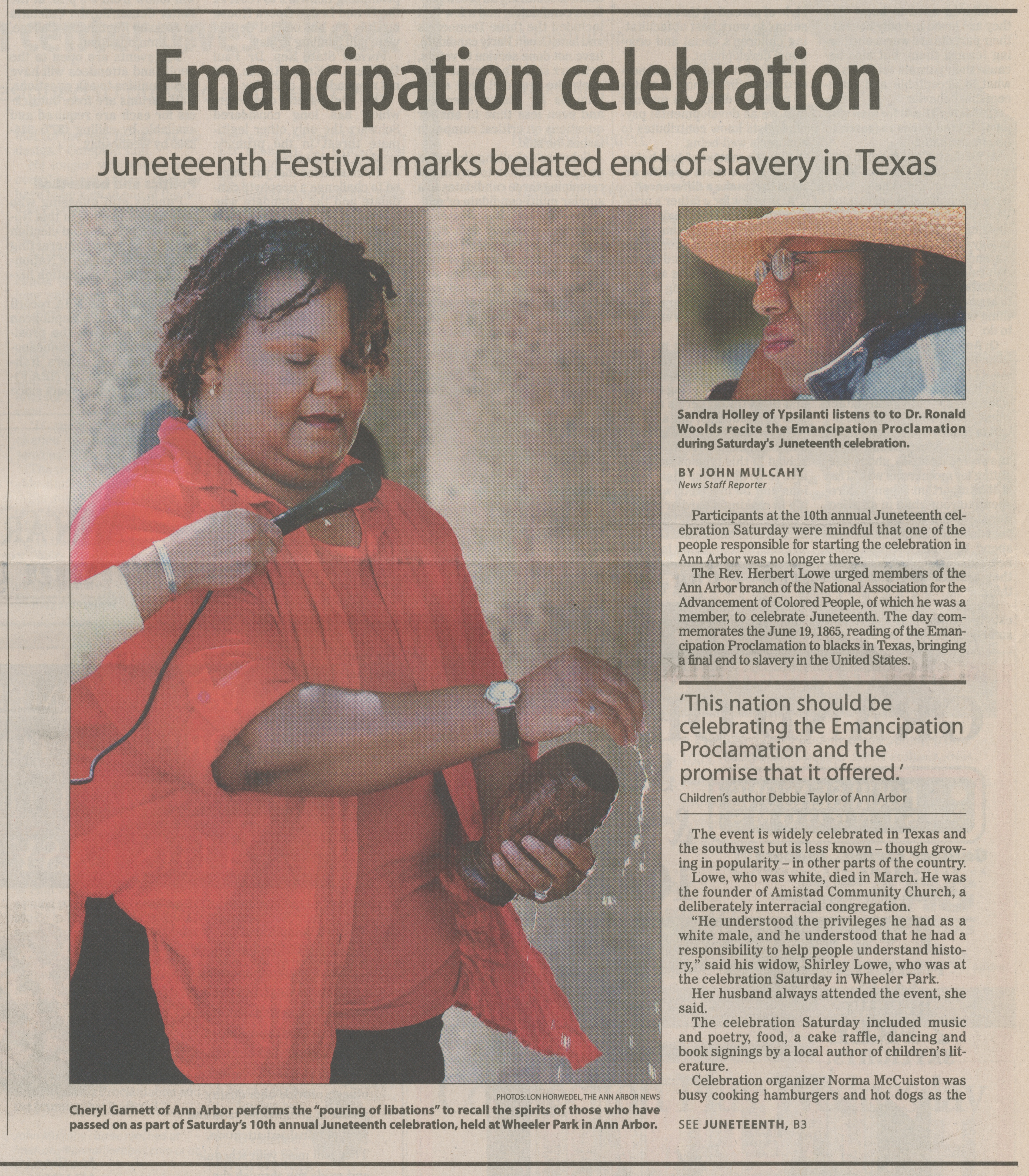 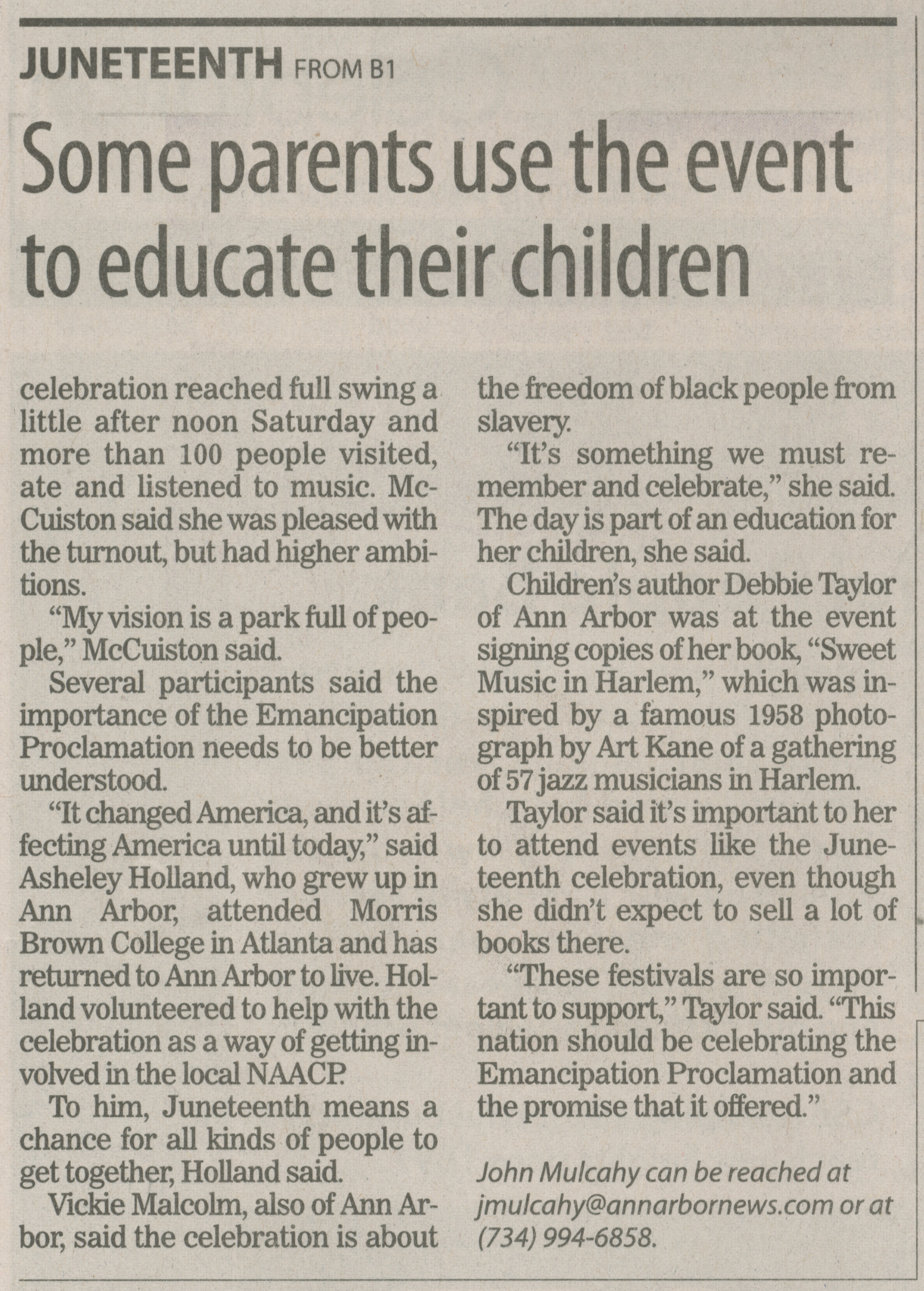 Caption: Cheryl Garnett of Ann Arbor performs the "pouring of libations" to recall the spirits of those who have passed on as part of Saturday's 10th annual Juneteenth celebration, held at Wheeler Park in Ann Arbor.

Participants at the 10th annual Juneteenth celebration Saturday were mindful that one of the people responsible for starting the celebration in Ann Arbor was no longer there.

The Rev. Herbert Lowe urged members of the Ann Arbor branch of the National Association for the Advancement of Colored People, of which he was a member, to celebrate Juneteenth. The day commemorates the June 19,1865, reading of the Emancipation Proclamation to blacks in Texas, bringing a final end to slavery in the United States.

'This nation should be celebrating the Emancipation Proclamation and the promise that it offered.'

The event is widely celebrated in Texas and the southwest but is less known -- though growing in popularity -- in other parts of the country.

Lowe, who was white, died in March. He was the founder of Amistad Community Church, a deliberately interracial congregation.

“He understood the privileges he had as a white male, and he understood that he had a responsibility to help people understand history,” said his widow, Shirley Lowe, who was at the celebration Saturday in Wheeler Park.

Her husband always attended the event, she said.

The celebration Saturday included music and poetry, food, a cake raffle, dancing and book signings by a local author of children’s literature.

Some parents use the event to educate their children

celebration reach full swing a little after noon Saturday and more than 100 people visited, ate and listened to music. McCuiston said she was pleased with the turnout, but had higher ambitions.

"My vision is a park full of people," McCuiston said.

Several participants said the importance of the Emancipation Proclamation needs to be better understood.

"It changed America, and it's affecting America until today," said Asheley Holland, who grew up in Ann Arbor, attended Morris Brown College in Atlanta and has returned to Ann Arbor to live. Holland volunteered to help with the celebration as a way of getting involved in the local NAACP.

To him, Juneteenth means a chance for all kinds of people to get together, Holland said.

Vickie Malcolm, also of Ann Arbor, said the celebration is about the freedom of black people from slavery.

"It's something we must remember and celebrate," she said. The day is part of an education for her children, she said.

Children's author Debbie Taylor of Ann Arbor was at the event signing copies of her book, "Sweet Music in Harlem," which was inspired by a famous 1958 photograph by Art Kane of a gathering of 57 jazz musicians in Harlem.

Taylor said it's important to her to attend events like the Juneteenth celebration, even though she didn't expect to sell a lot of books there.

"These festivals are so important to support," Taylor said. "This nation should be celebrating the Emancipation Proclamation and the promise that it offered."