Top of the Park's nightly host 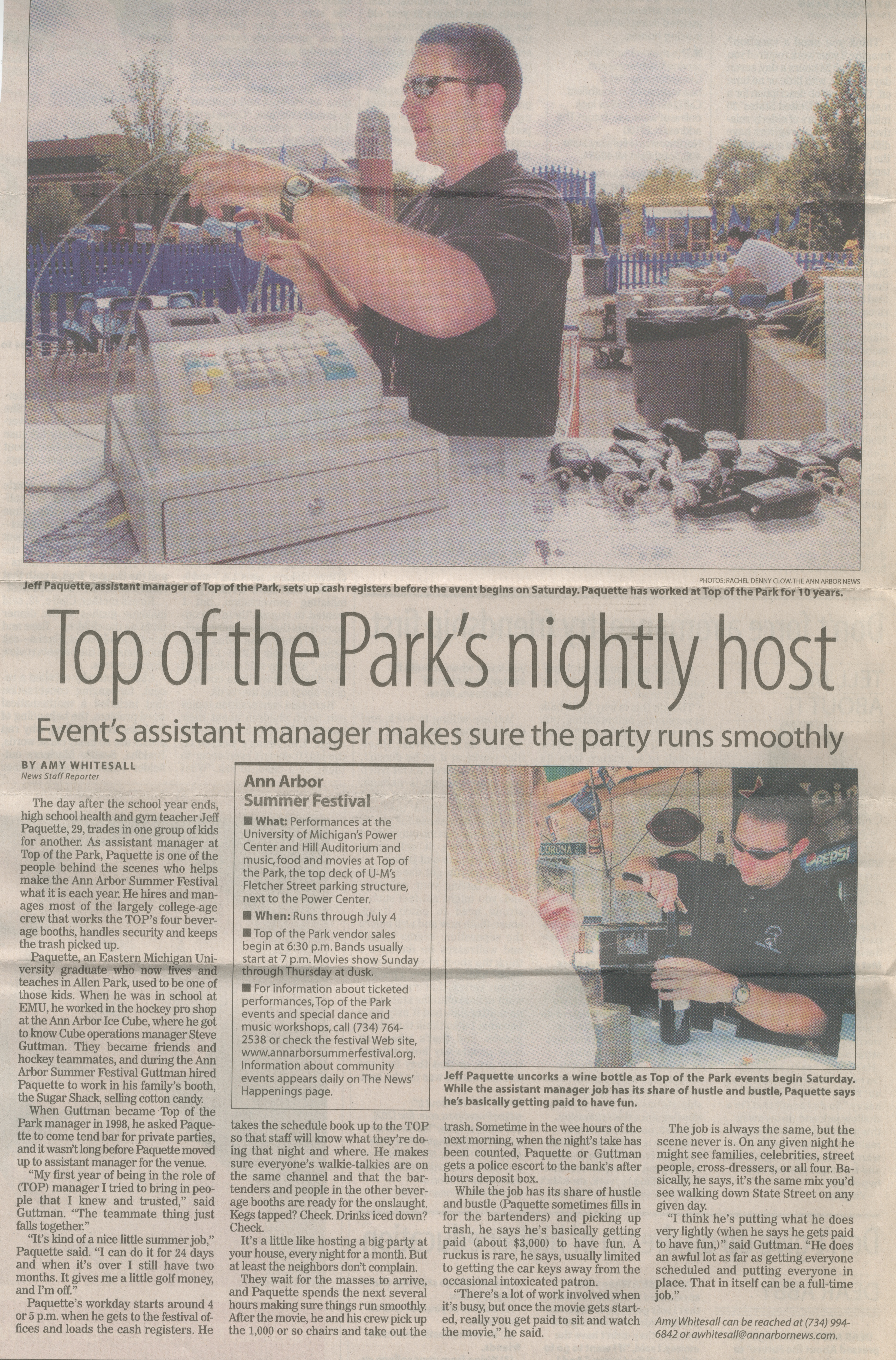 ﻿Top of the Park's nightly host

The day after the school year ends, high school health and gym teacher Jeff Paquette, 29, trades in one group of kids for another. As assistant manager at Top of the Park, Paquette is one of the people behind the scenes who helps make the Ann Arbor Summer Festival what it is each year. He hires and manages most of the largely college-age crew that works the TOP’S four beverage booths, handles security and keeps the trash picked up.

Paquette, an Eastern Michigan Uni-versity graduate who now lives and teaches in Allen Park, used to be one of those kids. When he was in school at EMU, he worked in the hockey pro shop at the Ann Arbor Ice Cube, where he got to know Cube operations manager Steve Guttman. They became friends and hockey teammates, and during the Ann Arbor Summer Festival Guttman hired Paquette to work in his family’s booth, the Sugar Shack, selling cotton candy.

When Guttman became Top of the Park manager in 1998, he asked Paquette to come tend bar for private parties, and it wasn’t long before Paquette moved up to assistant manager for the venue.

“My first year of being in the role of (TOP) manager I tried to bring in people that I knew and trusted,” said Guttman. “The teammate thing just falls together.”

“It’s kind of a nice little summer job,” Paquette said. “I can do it for 24 days and when it’s over I still have two months. It gives me a little golf money, and I’m off.”

Paquette’s workday starts around 4 or 5 p.m. when he gets to the festival offices and loads the cash registers. He takes the schedule book up to the TOP so that staff will know what they’re doing that night and where. He makes sure everyone’s walkie-talkies are on the same channel and that the bartenders and people in the other beverage booths are ready for the onslaught. Kbgs tapped? Check. Drinks iced down? Check.

It’s a little like hosting a big party at your house, every night for a month. But at least the neighbors don’t complain.

They wait for the masses to arrive, and Paquette spends the next several hours making sure things run smoothly. After the movie, he and his crew pick up the 1,000 or so chairs and take out the trash. Sometime in the wee hours of the next morning, when the night’s take has been counted, Paquette or Guttman gets a police escort to the bank’s after hours deposit box.

While the job has its share of hustle and bustle (Paquette sometimes fills in for the bartenders) and picking up trash, he says he’s basically getting paid (about $3,000) to have fun. A ruckus is rare, he says, usually limited to getting the car keys away from the occasional intoxicated patron.

“There’s a lot of work involved when it’s busy, but once the movie gets started, really you get paid to sit and watch the movie,” he said.

The job is always the same, but the scene never is. On any given night he might see families, celebrities, street people, cross-dressers, or all four. Basically, he says, it’s the same mix you’d see walking down State Street on any given day.

“I think he’s putting what he does very lightly (when he says he gets paid to have fun,)” said Guttman. “He does an awful lot as far as getting everyone scheduled and putting everyone in place. That in itself can be a frill-time job.”

■ What: Performances at the University of Michigan's Power Center and Hill Auditorium and music, food and movies at Top of the Park, the top deck of U-M's Fletcher Street parking structure, next to the Power Center.

■ When: Runs through July 4

■ For information about ticketed performances,Top of the Park events and special dance and music workshops, call (734) 764-2538 or check the festival Web site, www.annarborsummerfestival.org. Information about community events appears daily on The News' Happenings page.