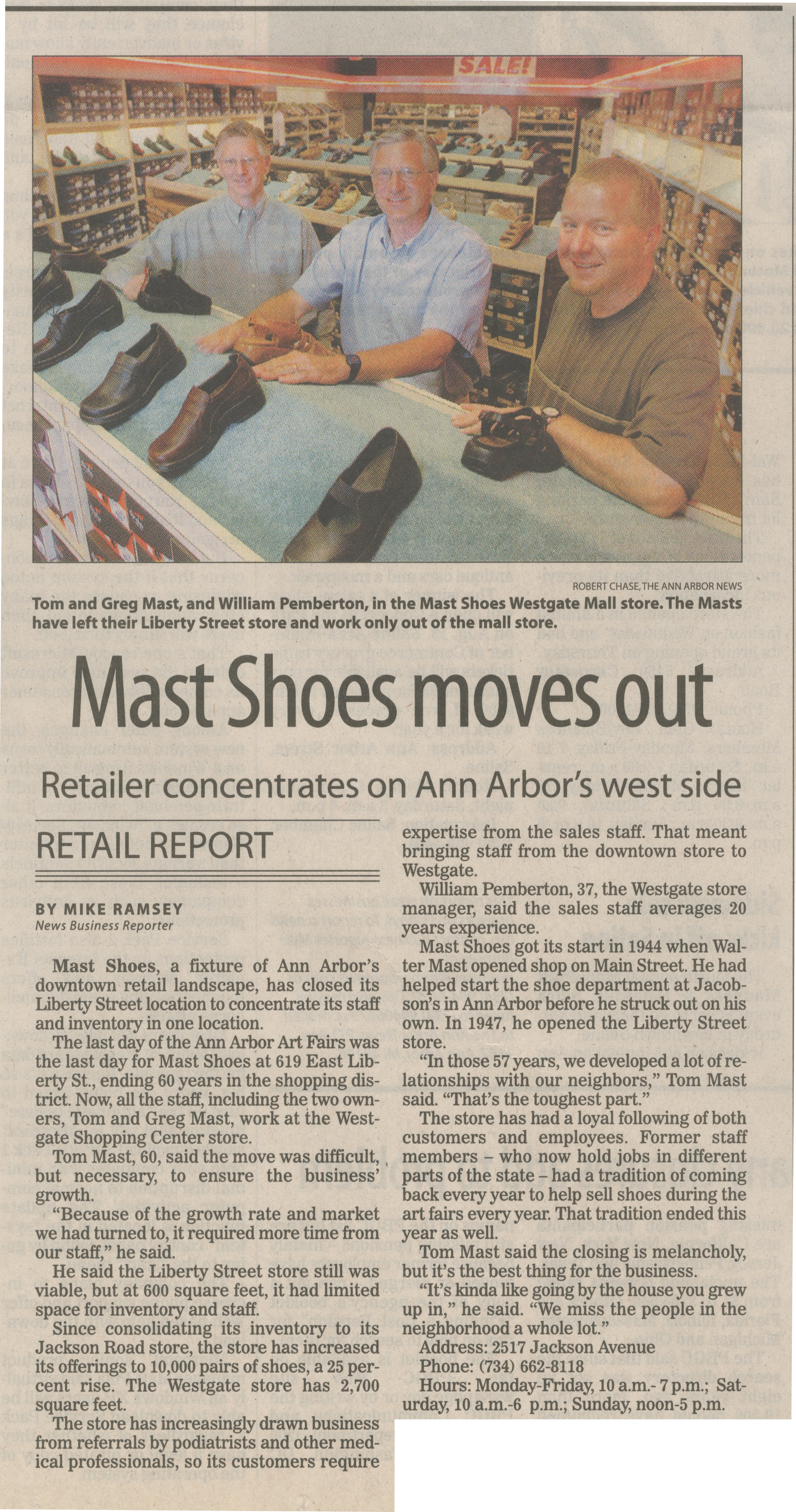 Tom and Greg Mast, and William Pemberton, in the Mast Shoes Westgate Mall store. The Masts have left their Liberty Street store and work only out of the mall store.

Mast Shoes, a fixture of Ann Arbor’s downtown retail landscape, has closed its Liberty Street location to concentrate its staff and inventory in one location.

The last day of the Ann Arbor Art Fairs was the last day for Mast Shoes at 619 East Liberty St., ending 60 years in the shopping district. Now, all the staff, including the two owners, Tom and Greg Mast, work at the Westgate Shopping Center store.

Tom Mast, 60, said the move was difficult, but necessary, to ensure the business’ growth.

“Because of the growth rate and market we had turned to, it required more time from our staff,” he said.

He said the Liberty Street store still was viable, but at 600 square feet, it had limited space for inventory and staff.

Since consolidating its inventory to its Jackson Road store, the store has increased its offerings to 10,000 pairs of shoes, a 25 percent rise. The Westgate store has 2,700 square feet.

The store has increasingly drawn business from referrals by podiatrists and other medical professionals, so its customers require expertise from the sales staff. That meant bringing staff from the downtown store to Westgate.

Mast Shoes got its start in 1944 when Walter Mast opened shop on Main Street. He had helped start the shoe department at Jacobson’s in Ann Arbor before he struck out on his own. In 1947, he opened the Liberty Street store.

“In those 57 years, we developed a lot of relationships with our neighbors,” Tom Mast said. “That’s the toughest part.”

The store has had a loyal following of both customers and employees. Former staff members - who now hold jobs in different parts of the state - had a tradition of coming back every year to help sell shoes during the art fairs every year. That tradition ended this year as well.

Tom Mast said the closing is melancholy, but it’s the best thing for the business.

“It’s kinda like going by the house you grew up in,” he said. “We miss the people in the neighborhood a whole lot.”