Feeding needy is her priority 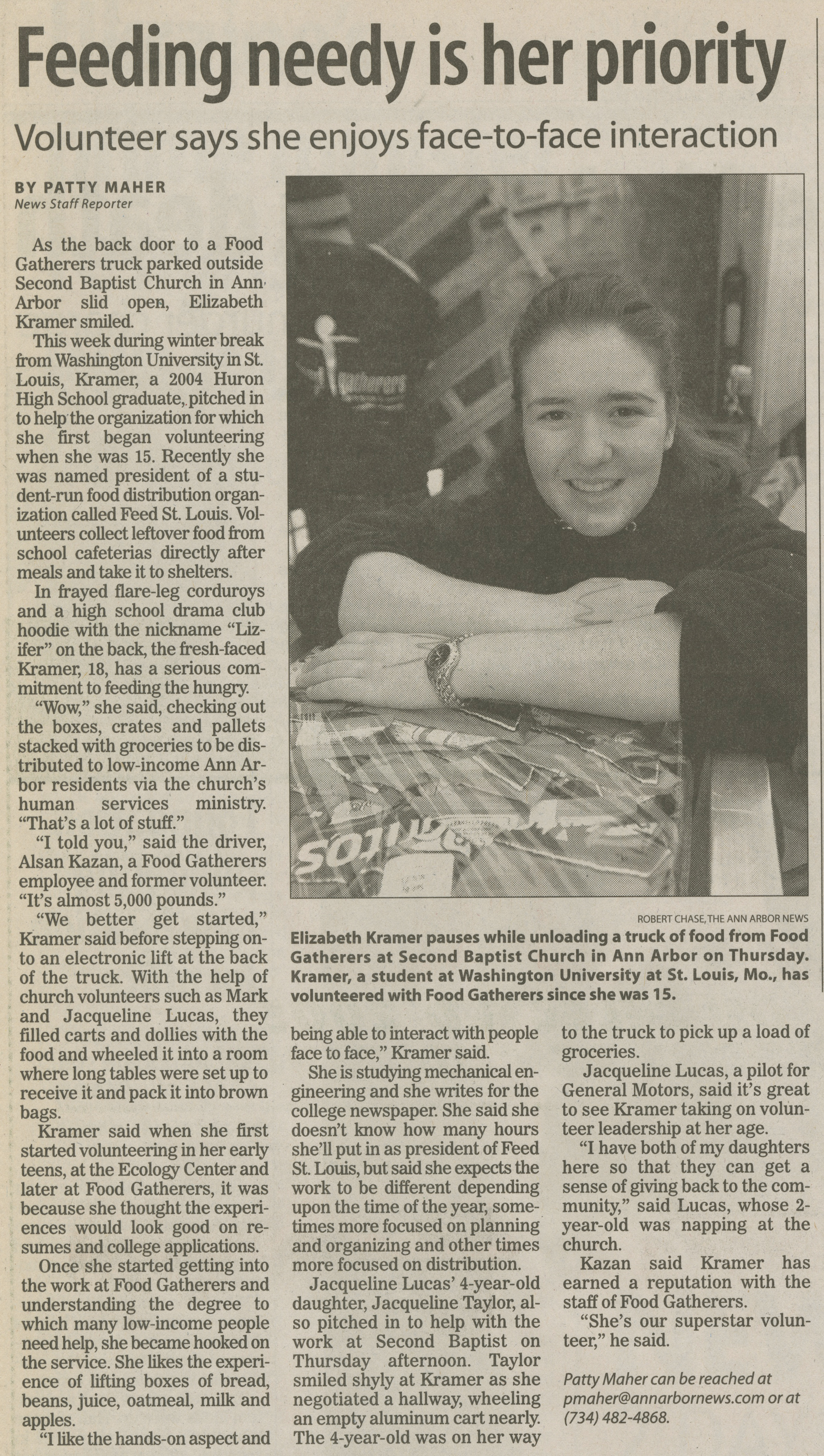 ﻿Feeding needy is her priority

Elizabeth Kramer pauses while unloading a truck of food from Food Gatherers at Second Baptist Church in Ann Arbor on Thursday. Kramer, a student at Washington University at St. Louis, Mo., has volunteered with Food Gatherers since she was 15.

As the back door to a Food Gatherers truck parked outside Second Baptist Church in Ann Arbor slid open, Elizabeth Kramer smiled.

This week during winter break from Washington University in St Louis, Kramer, a 2004 Huron High School graduate, pitched in to help the organization for which she first began volunteering when she was 15. Recently she was named president of a student-run food distribution organization called Feed St Louis. Volunteers collect leftover food from school cafeterias directly after meals and take it to shelters.

In frayed flare-leg corduroys and a high school drama club hoodie with the nickname “Liz-ifer” on the back, the fresh-faced Kramer, 18, has a serious commitment to feeding the hungry.

“Wow,” she said, checking out the boxes, crates and pallets stacked with groceries to be distributed to low-income Ann Arbor residents via the church’s human services ministry. “That’s a lot of stuff.”

“We better get started,” Kramer said before stepping onto an electronic lift at the back of the truck. With the help of church volunteers such as Mark and Jacqueline Lucas, they filled carts and dollies with the food and wheeled it into a room where long tables were set up to receive it and pack it into brown bags.

Kramer said when she first started volunteering in her early teens, at the Ecology Center and later at Food Gatherers, it was because she thought the experiences would look good on resumes and college applications.

Once she started getting into the work at Food Gatherers and understanding the degree to which many low-income people need help, she became hooked on the service. She likes the experience of lifting boxes of bread, beans, juice, oatmeal, milk and apples.

“I like the hands-on aspect and being able to interact with people face to face,” Kramer said.

She is studying mechanical engineering and she writes for the college newspaper. She said she doesn’t know how many hours she’ll put in as president of Feed St. Louis, but said she expects the work to be different depending upon the time of the year, sometimes more focused on planning and organizing and other times more focused on distribution.

Jacqueline Lucas’ 4-year-old daughter, Jacqueline Taylor, also pitched in to help with the work at Second Baptist on Thursday afternoon. Taylor smiled shyly at Kramer as she negotiated a hallway, wheeling an empty aluminum cart nearly. The 4-year-old was on her way to the truck to pick up a load of groceries.

Jacqueline Lucas, a pilot for General Motors, said it’s great to see Kramer taking on volunteer leadership at her age.

“I have both of my daughters here so that they can get a sense of giving back to the community,” said Lucas, whose 2-year-old was napping at the church.

Kazan said Kramer has earned a reputation with the staff of Food Gatherers.

“She’s our superstar volunteer,” he said.