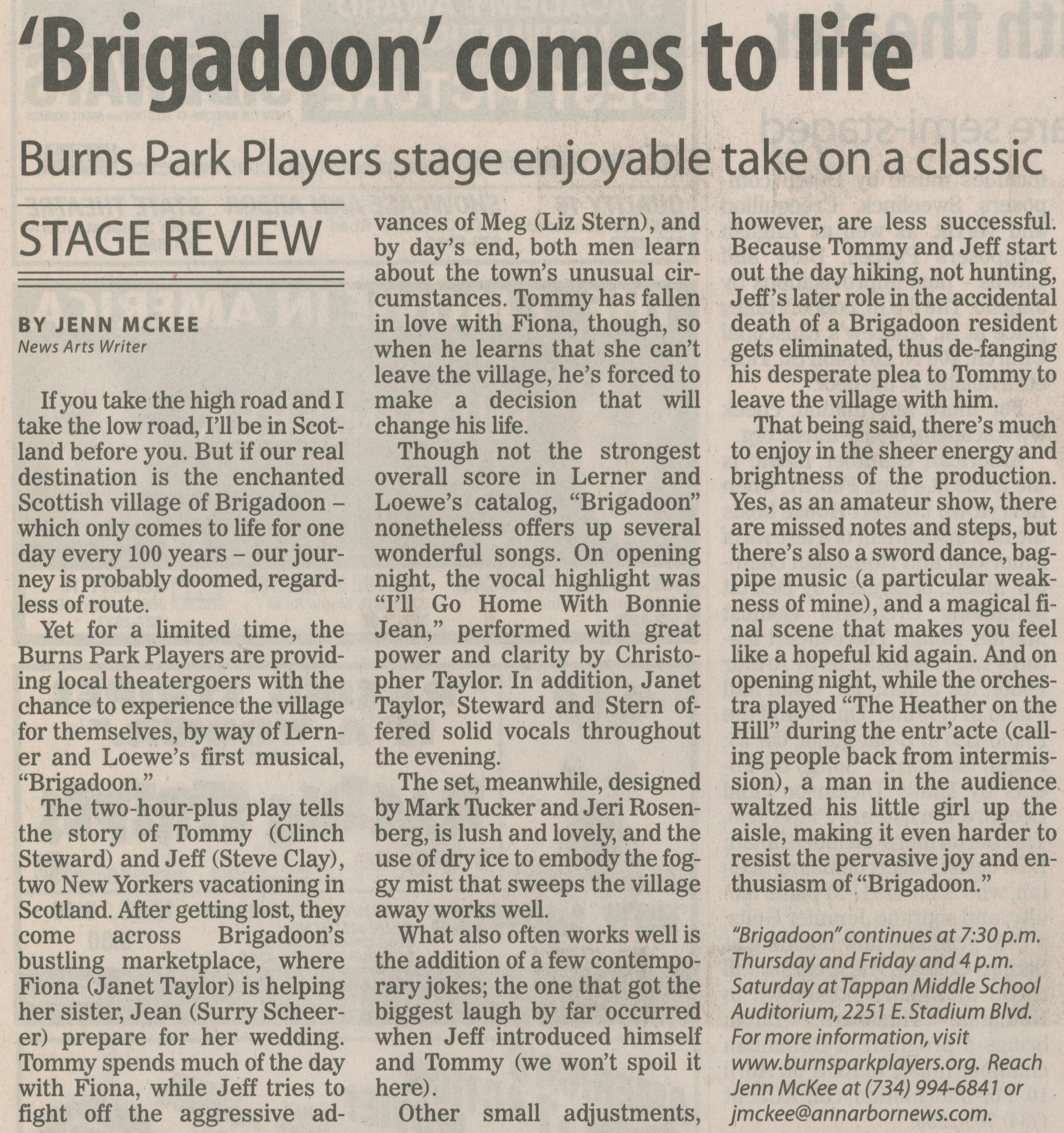 If you take the high road and I take the low road, I’ll be in Scotland before you. But if our real destination is the enchanted Scottish village of Brigadoon - which only comes to life for one day every 100 years - our journey is probably doomed, regardless of route.

Yet for a limited time, the Burns Park Players are providing local theatergoers with the chance to experience the village for themselves, by way of Lerner and Loewe’s first musical, “Brigadoon.”

The two-hour-plus play tells the story of Tommy (Clinch Steward) and Jeff (Steve Clay), two New Yorkers vacationing in Scotland. After getting lost, they come across Brigadoon’s bustling marketplace, where Fiona (Janet Taylor) is helping her sister, Jean (Surry Scheerer) prepare for her wedding. Tommy spends much of the day with Fiona, while Jeff tries to fight off the aggressive advances of Meg (Liz Stern), and by day’s end, both men learn about the town’s unusual circumstances. Tommy has fallen in love with Fiona, though, so when he learns that she can’t leave the village, he’s forced to make a decision that will change his life.

Though not the strongest overall score in Lerner and Loewe’s catalog, “Brigadoon” nonetheless offers up several wonderful songs. On opening night, the vocal highlight was “I’ll Go Home With Bonnie Jean,” performed with great power and clarity by Christopher Taylor. In addition, Janet Taylor, Steward and Stern offered solid vocals throughout the evening.

The set, meanwhile, designed by Mark Tucker and Jeri Rosenberg, is lush and lovely, and the use of dry ice to embody the foggy mist that sweeps the village away works well.

What also often works well is the addition of a few contemporary jokes; the one that got the biggest laugh by far occurred when Jeff introduced himself and Tommy (we won’t spoil it here).

Other small adjustments, however, are less successful. Because Tommy and Jeff start out the day hiking, not hunting, Jeff’s later role in the accidental death of a Brigadoon resident gets eliminated, thus de-fanging his desperate plea to Tommy to leave the village with him.

That being said, there’s much to enjoy in the sheer energy and brightness of the production. Yes, as an amateur show, there are missed notes and steps, but there’s also a sword dance, bagpipe music (a particular weakness of mine), and a magical final scene that makes you feel like a hopeful kid again. And on opening night, while the orchestra played “The Heather on the Hill” during the entr’acte (calling people back from intermission), a man in the audience waltzed his little girl up the aisle, making it even harder to resist the pervasive joy and enthusiasm of “Brigadoon.”