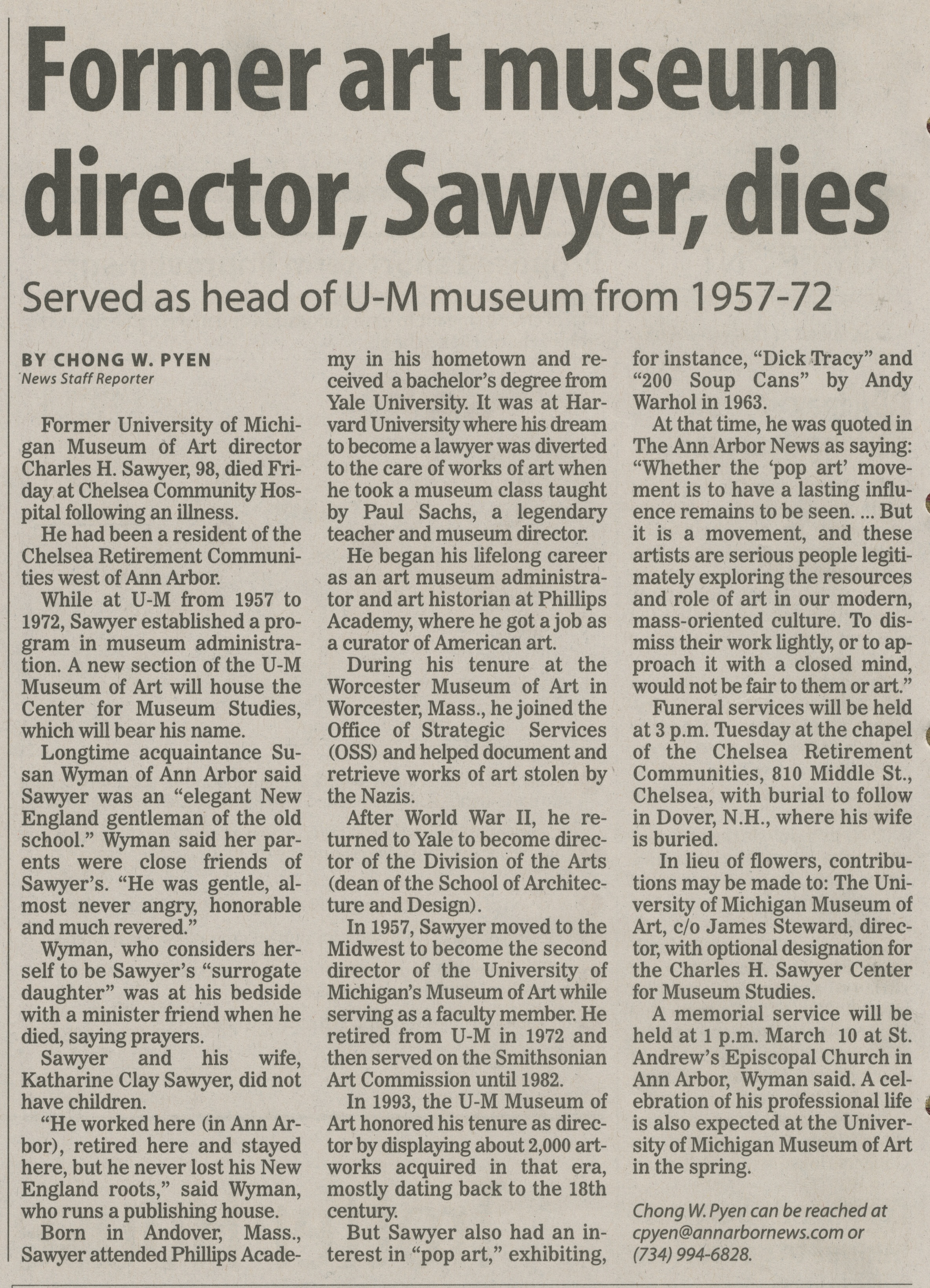 He had been a resident of the Chelsea Retirement Communities west of Ann Arbor.

While at U-M from 1957 to 1972, Sawyer established a program in museum administration. A new section of the U-M Museum of Art will house the Center for Museum Studies, which will bear his name.

Longtime acquaintance Susan Wyman of Ann Arbor said Sawyer was an “elegant New England gentleman of the old school.” Wyman said her parents were close friends of Sawyer’s. “He was gentle, almost never angry, honorable and much revered.”

Wyman, who considers herself to be Sawyer’s “surrogate daughter” was at his bedside with a minister friend when he died, saying prayers.

Sawyer and his wife, Katharine Clay Sawyer, did not have children.

“He worked here (in Ann Arbor), retired here and stayed here, but he never lost his New England roots,” said Wyman, who runs a publishing house.

Born in Andover, Mass., Sawyer attended Phillips Academy in his hometown and received a bachelor’s degree from Yale University. It was at Harvard University where his dream to become a lawyer was diverted to the care of works of art when he took a museum class taught by Paul Sachs, a legendary teacher and museum director.

He began his lifelong career as an art museum administrator and art historian at Phillips Academy, where he got a job as a curator of American art.

During his tenure at the Worcester Museum of Art in Worcester, Mass., he joined the Office of Strategic Services (OSS) and helped document and retrieve works of art stolen by the Nazis.

After World War II, he returned to Yale to become director of the Division of the Arts (dean of the School of Architecture and Design).

In 1957, Sawyer moved to the Midwest to become the second director of the University of Michigan’s Museum of Art while serving as a faculty member. He retired from U-M in 1972 and then served on the Smithsonian Art Commission until 1982.

In 1993, the U-M Museum of Art honored his tenure as director by displaying about 2,000 artworks acquired in that era, mostly dating back to the 18th century.

At that time, he was quoted in The Ann Arbor News as saying: “Whether the ‘pop art’ movement is to have a lasting influence remains to be seen.... But it is a movement, and these artists are serious people legitimately exploring the resources and role of art in our modern, mass-oriented culture. To dismiss their work lightly, or to approach it with a closed mind, would not be fair to them or art.”

Funeral services will be held at 3 p.m. Tuesday at the chapel of the Chelsea Retirement Communities, 810 Middle St., Chelsea, with burial to follow in Dover, N.H., where his wife is buried.

In lieu of flowers, contributions may be made to: The University of Michigan Museum of Art, c/o James Steward, director, with optional designation for the Charles H. Sawyer Center for Museum Studies.

A memorial service will be held at 1 p.m. March 10 at St. Andrew’s Episcopal Church in Ann Arbor, Wyman said. A celebration of his professional life is also expected at the University of Michigan Museum of Art in the spring.