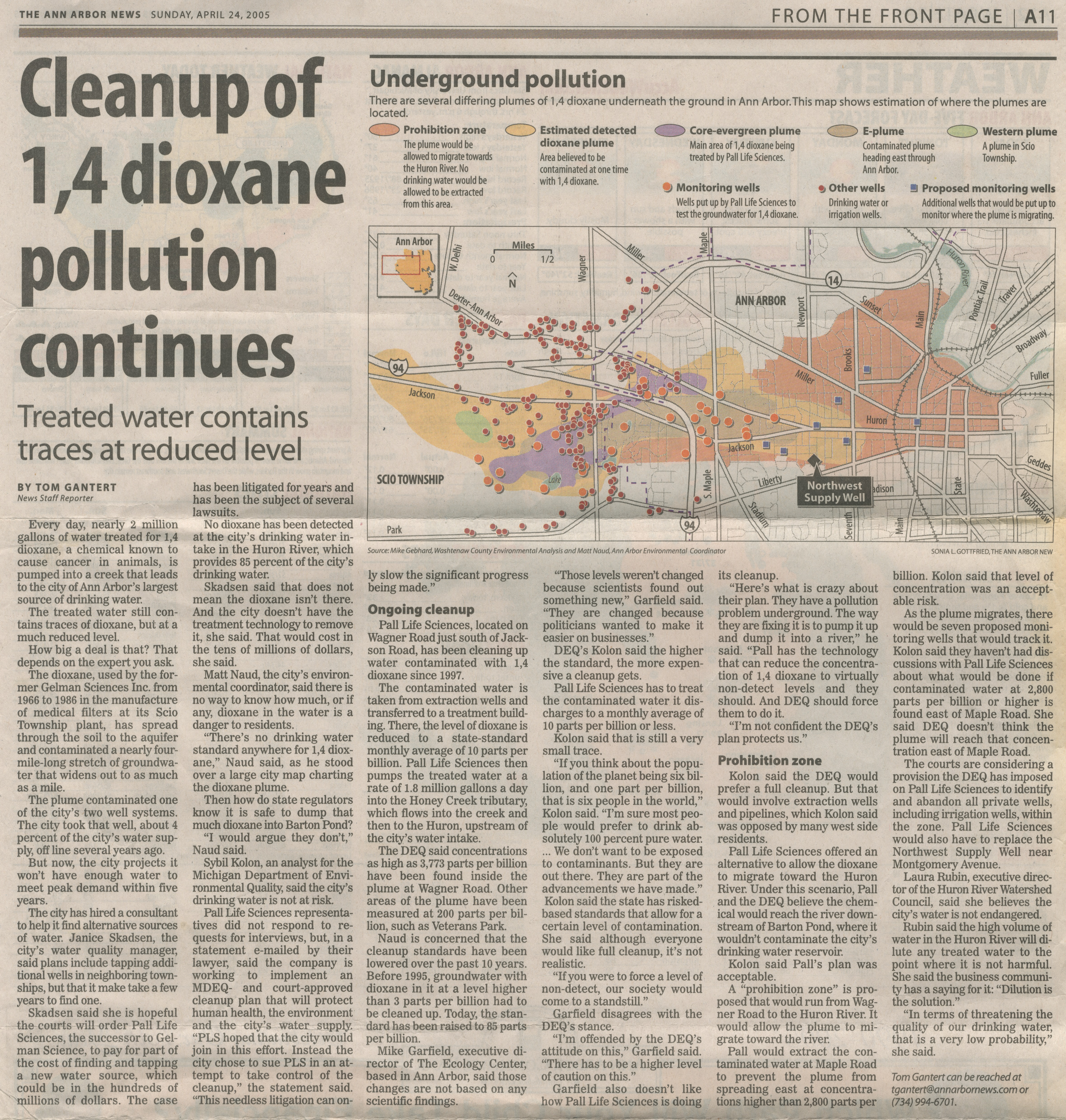 Every day, nearly 2 million gallons of water treated for 1,4 dioxane, a chemical known to cause cancer in animals, is pumped into a creek that leads to the city of Ann Arbor’s largest source of drinking water.

The treated water still contains traces of dioxane, but at a much reduced level.

How big a deal is that? That depends on the expert you ask.

The dioxane, used by the former Gelman Sciences Inc. from 1966 to 1986 in the manufacture of medical filters at its Scio Township plant, has spread through the soil to the aquifer and contaminated a nearly four-mile-long stretch of groundwater that widens out to as much as a mile.

The plume contaminated one of the city’s two well systems. The city took that well, about 4 percent of the city’s water supply, off line several years ago.

But now, the city projects it won’t have enough water to meet peak demand within five years.

The city has hired a consultant to help it find alternative sources of water. Janice Skadsen, the city’s water quality manager, said plans include tapping additional wells in neighboring townships, but that it make take a few years to find one.

Skadsen said she is hopeful the courts will order Pall Life Sciences, the successor to Gelman Science, to pay for part of the cost of finding and tapping a new water source, which could be in the hundreds of millions of dollars. The case has been litigated for years and has been the subject of several lawsuits.

Skadsen said that does not mean the dioxane isn’t there. And the city doesn’t have the treatment technology to remove it, she said. That would cost in the tens of millions of dollars, she said.

Matt Naud, the city’s environmental coordinator, said there is no way to know how much, or if any, dioxane in the water is a danger to residents.

“There’s no drinking water standard anywhere for 1,4 dioxane,” Naud said, as he stood over a large city map charting the dioxane plume.

Then how do state regulators know it is safe to dump that much dioxane into Barton Pond?

“I would argue they don’t,” Naud said.

Sybil Kolon, an analyst for the Michigan Department of Environmental Quality, said the city’s drinking water is not at risk.

Pall Life Sciences representatives did not respond to requests for interviews, but, in a statement e-mailed by their lawyer, said the company is working to implement an MDEQ- and court-approved cleanup plan that will protect human health, the environment and the city’s water supply. “PLS hoped that the city would join in this effort. Instead the city chose to sue PLS in an attempt to take control of the cleanup,” the statement said. “This needless litigation can only slow the significant progress being made.”

Pall Life Sciences, located on Wagner Road just south of Jackson Road, has been cleaning up water contaminated with 1,4 dioxane since 1997.

The contaminated water is taken from extraction wells and transferred to a treatment building. There, the level of dioxane is reduced to a state-standard monthly average of 10 parts per billion. Pall Life Sciences then pumps the treated water at a rate of 1.8 million gallons a day into the Honey Creek tributary, which flows into the creek and then to the Huron, upstream of the city’s water intake.

Naud is concerned that the cleanup standards have been lowered over the past 10 years. Before 1995, groundwater with dioxane in it at a level higher than 3 parts per billion had to be cleaned up. Today, the standard has been raised to 85 parts per billion.

Mike Garfield, executive director of The Ecology Center, based in Ann Arbor, said those changes are not based on any scientific findings.

DEQ’s Kolon said the higher the standard, the more expensive a cleanup gets.

Pall Life Sciences has to treat the contaminated water it discharges to a monthly average of 10 parts per billion or less.

Kolon said that is still a very small trace.

“If you think about the population of the planet being six billion, and one part per billion, that is six people in the world,” Kolon said. “I’m sure most people would prefer to drink absolutely 100 percent pure water. ... We don’t want to be exposed to contaminants. But they are out there. They are part of the advancements we have made.” Kolon said the state has risked-based standards that allow for a certain level of contamination. She said although everyone would like full cleanup, it’s not realistic.

“If you were to force a level of non-detect, our society would come to a standstill.”

Garfield disagrees with the DEQ’s stance.

“I’m offended by the DEQ’s attitude on this,” Garfield said. “There has to be a higher level of caution on this.”

Garfield also doesn’t like how Pall Life Sciences is doing its cleanup.

“Here’s what is crazy about their plan. They have a pollution problem underground. The way they are fixing it is to pump it up and dump it into a river,” he said. “Pall has the technology that can reduce the concentration of 1,4 dioxane to virtually non-detect levels and they should. And DEQ should force them to do it.

“I’m not confident the DEQ’s plan protects us.”

Kolon said the DEQ would prefer a full cleanup. But that would involve extraction wells and pipelines, which Kolon said was opposed by many west side residents.

Pall Life Sciences offered an alternative to allow the dioxane to migrate toward the Huron River. Under this scenario, Pall and the DEQ believe the chemical would reach the river downstream of Barton Pond, where it wouldn’t contaminate the city’s drinking water reservoir.

A “prohibition zone” is proposed that would rim from Wagner Road to the Huron River. It would allow the plume to migrate toward the river.

Pall would extract the contaminated water at Maple Road to prevent the plume from spreading east at concentrations higher than 2,800 parts per billion. Kolon said that level of concentration was an acceptable risk.

As the plume migrates, there would be seven proposed monitoring wells that would track it. Kolon said they haven’t had discussions with Pall Life Sciences about what would be done if contaminated water at 2,800 parts per billion or higher is found east of Maple Road. She said DEQ doesn’t think the plume will reach that concentration east of Maple Road.

The courts are considering a provision the DEQ has imposed on Pall Life Sciences to identify and abandon all private wells, including irrigation wells, within the zone. Pall Life Sciences would also have to replace the Northwest Supply Well near Montgomery Avenue.

Laura Rubin, executive director of the Huron River Watershed Council, said she believes the city’s water is not endangered.

Rubin said the high volume of water in the Huron River will dilute any treated water to the point where it is not harmful. She said the business community has a saying for it: “Dilution is the solution.”

“In terms of threatening the quality of our drinking water, that is a very low probability,” she said.

There are several differing plumes of 1,4 dioxane underneath the ground in Ann Arbor.This map shows estimation of where the plumes are located.

Area believed to be contaminated at one time with 1,4 dioxane.

Main area of 1,4 dioxane being treated by Pall Life Sciences.

A plume in Scio Township

Wells put up by Pall life Sciences to to test the groundwater for 1,4 dioxane