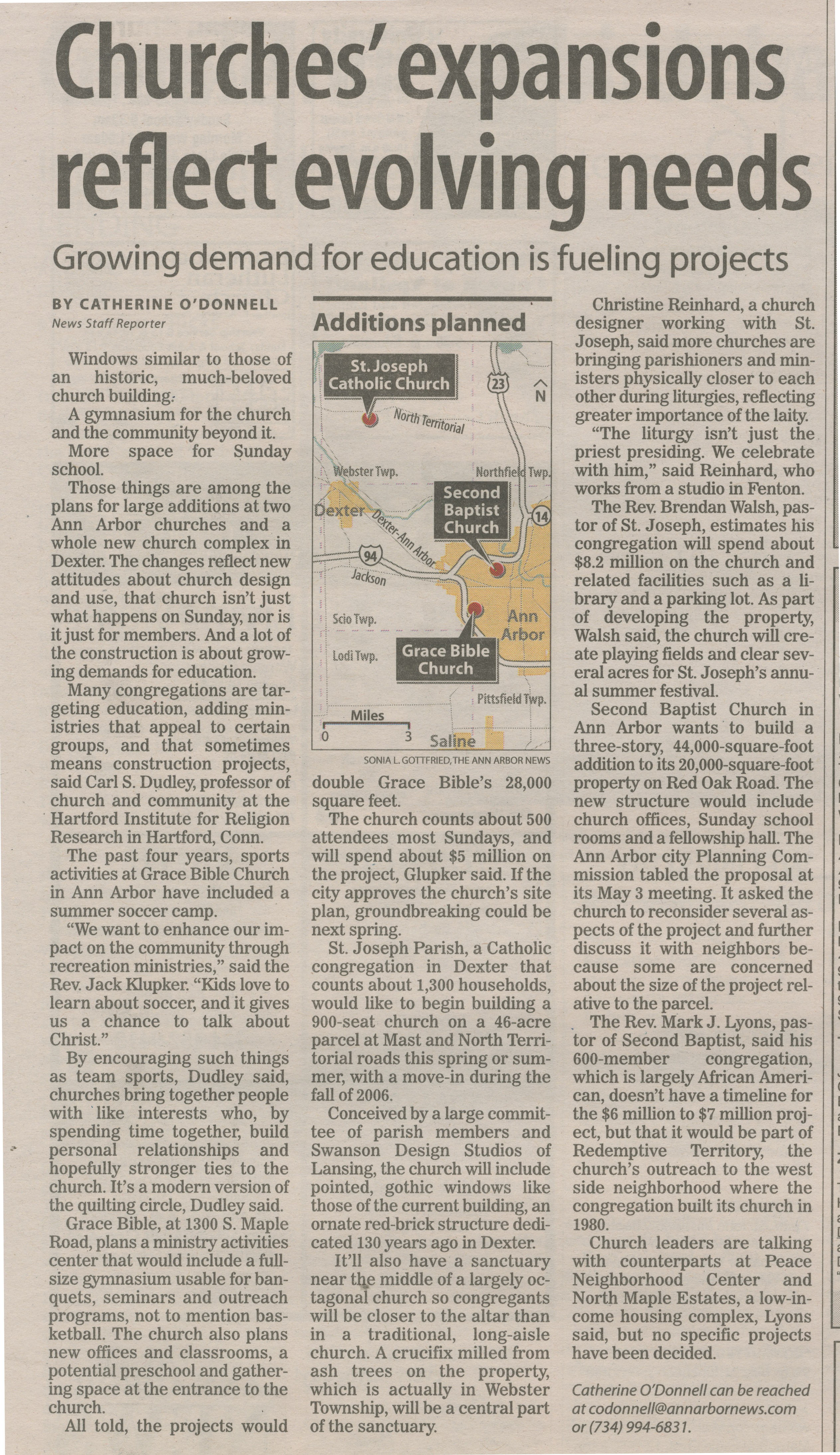 Windows similar to those of an historic, much-beloved church building.

A gymnasium for the church and the community beyond it.

Those things are among the plans for large additions at two Ann Arbor churches and a whole new church complex in Dexter. The changes reflect new attitudes about church design and use, that church isn’t just what happens on Sunday, nor is it just for members. And a lot of the construction is about growing demands for education.

Many congregations are targeting education, adding ministries that appeal to certain groups, and that sometimes means construction projects, said Carl S. Dudley, professor of church and community at the Hartford Institute for Religion Research in Hartford, Conn.

The past four years, sports activities at Grace Bible Church in Ann Arbor have included a summer soccer camp.

“We want to enhance our impact on the community through recreation ministries,” said the Rev. Jack Klupker. “Kids love to learn about soccer, and it gives us a chance to talk about Christ.”

By encouraging such things as team sports, Dudley said, churches bring together people with like interests who, by spending time together, build personal relationships and hopefully stronger ties to the church. It’s a modem version of the quilting circle, Dudley said.

Grace Bible, at 1300 S. Maple Road, plans a ministry activities center that would include a full-size gymnasium usable for banquets, seminars and outreach programs, not to mention basketball. The church also plans new offices and classrooms, a potential preschool and gathering space at the entrance to the church.

All told, the projects would double Grace Bible’s 28,000 square feet.

The church counts about 500 attendees most Sundays, and will spend about $5 million on the project, Glupker said. If the city approves the church’s site plan, groundbreaking could be next spring.

St. Joseph Parish, a Catholic congregation in Dexter that counts about 1,300 households, would like to begin building a 900-seat church on a 46-acre parcel at Mast and North Territorial roads this spring or summer, with a move-in during the fall of 2006.

Conceived by a large committee of parish members and Swanson Design Studios of Lansing, the church will include pointed, gothic windows like those of the current building, an ornate red-brick structure dedicated 130 years ago in Dexter.

It’ll also have a sanctuary near the middle of a largely octagonal church so congregants will be closer to the altar than in a traditional, long-aisle church. A crucifix milled from ash trees on the property, which is actually in Webster Township, will be a central part of the sanctuary.

Christine Reinhard, a church designer working with St. Joseph, said more churches are bringing parishioners and ministers physically closer to each other during liturgies, reflecting greater importance of the laity.

“The liturgy isn’t just the priest presiding. We celebrate with him,” said Reinhard, who works from a studio in Fenton.

The Rev. Brendan Walsh, pastor of St. Joseph, estimates his congregation will spend about $8.2 million on the church and related facilities such as a library and a parking lot. As part of developing the property, Walsh said, the church will create playing fields and clear several acres for St. Joseph’s annual summer festival.

Second Baptist Church in Ann Arbor wants to build a three-story, 44,000-square-foot addition to its 20,000-square-foot property on Red Oak Road. The new structure would include church offices, Sunday school rooms and a fellowship hall. The Ann Arbor city Planning Commission tabled the proposal at its May 3 meeting. It asked the church to reconsider several aspects of the project and further discuss it with neighbors because some are concerned about the size of the project relative to the parcel.

The Rev. Mark J. Lyons, pastor of Second Baptist, said his 600-member congregation, which is largely African American, doesn’t have a timeline for the $6 million to $7 million project, but that it would be part of Redemptive Territory, the church’s outreach to the west side neighborhood where the congregation built its church in 1980.

Church leaders are talking with counterparts at Peace Neighborhood Center and North Maple Estates, a low-in-come housing complex, Lyons said, but no specific projects have been decided.