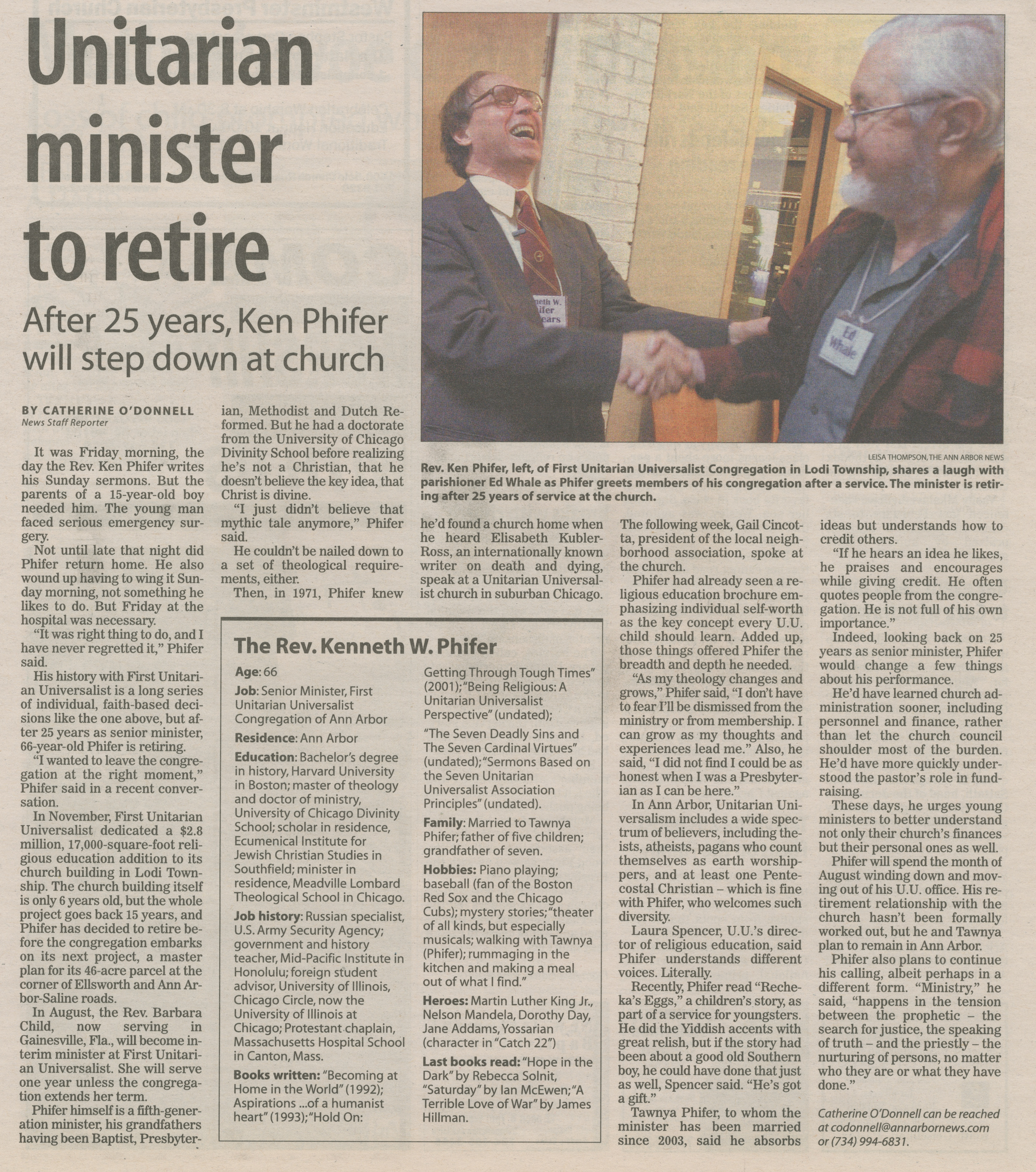 After 25 years, Ken Phifer will step down at church

LEISA THOMPSON, THE ANN ARBOR NEWS
Rev. Ken Phifer, left, of First Unitarian Universalist Congregation in Lodi Township, shares a laugh with parishioner Ed Whale as Phifer greets members of his congregation after a service. The minister is retiring after 25 years of service at the church.

It was Friday, morning, the day the Rev. Ken Phifer writes his Sunday sermons. But the parents of a 15-year-old boy needed him. The young man faced serious emergency surgery.

Not until late that night did Phifer return home. He also wound up having to wing it Sunday morning, not something he likes to do. But Friday at the hospital was necessary.

“It was right thing to do, and I have never regretted it,” Phifer said.

His history with First Unitarian Universalist is a long series of individual, faith-based decisions like the one above, but after 25 years as senior minister, 66-year-old Phifer is retiring.

“I wanted to leave the congregation at the right moment,” Phifer said in a recent conversation.

In November, First Unitarian Universalist dedicated a $2.8 million, 17,000-square-foot religious education addition to its church building in Lodi Township. The church building itself is only 6 years old, but the whole project goes back 15 years, and Phifer has decided to retire before the congregation embarks on its next project, a master plan for its 46-acre parcel at the corner of Ellsworth and Ann Arbor-Saline roads.

In August, the Rev. Barbara Child, now serving in Gainesville, Fla., will become interim minister at First Unitarian Universalist. She will serve one year unless the congregation extends her term.

Phifer himself is a fifth-generation minister, his grandfathers having been Baptist, Presbyterian, Methodist and Dutch Reformed. But he had a doctorate from the University of Chicago Divinity School before realizing he’s not a Christian, that he doesn’t believe the key idea, that Christ is divine.

He couldn’t be nailed down to a set of theological requirements, either.

Then, in 1971, Phifer knew he’d found a church home when he heard Elisabeth Kubler-Ross, an internationally known writer on death and dying, speak at a Unitarian Universalist church in suburban Chicago.

The following week, Gail Cincotta, president of the local neighborhood association, spoke at the church.

Phifer had already seen a religious education brochure emphasizing individual self-worth as the key concept every U.U. child should learn. Added up, those things offered Phifer the breadth and depth he needed.

“As my theology changes and grows,” Phifer said, “I don’t have to fear I’ll be dismissed from the ministry or from membership. I can grow as my thoughts and experiences lead me.” Also, he said, “I did not find I could be as honest when I was a Presbyterian as I can be here.”

In Ann Arbor, Unitarian Universalism includes a wide spectrum of believers, including theists, atheists, pagans who count themselves as earth worshippers, and at least one Pentecostal Christian - which is fine with Phifer, who welcomes such diversity.

Recently, Phifer read “Recheka’s Eggs,” a children’s story, as part of a service for youngsters. He did the Yiddish accents with great relish, but if the story had been about a good old Southern boy, he could have done that just as well, Spencer said. “He’s got a gift.”

Tawnya Phifer, to whom the minister has been married since 2003, said he absorbs ideas but understands how to credit others.

“If he hears an idea he likes, he praises and encourages while giving credit. He often quotes people from the congregation. He is not full of his own importance.”

Indeed, looking back on 25 years as senior minister, Phifer would change a few things about his performance.

He’d have learned church administration sooner, including personnel and finance, rather than let the church council shoulder most of the burden. He’d have more quickly understood the pastor’s role in fundraising.

These days, he urges young ministers to better understand not only their church’s finances but their personal ones as well.

Phifer will spend the month of August winding down and moving out of his U.U. office. His retirement relationship with the church hasn’t been formally worked out, but he and Tawnya plan to remain in Ann Arbor.

Phifer also plans to continue his calling, albeit perhaps in a different form. “Ministry,” he said, “happens in the tension between the prophetic - the search for justice, the speaking of truth - and the priestly - the nurturing of persons, no matter who they are or what they have done.”

Hobbies: Piano playing; baseball (fan of the Boston Red Sox and the Chicago Cubs); mystery stories; "theater of all kinds, but especially musicals; walking with Tawnya (Phifer); rummaging in the kitchen and making a meal out of what I find."

Last books read: "Hope in the Dark" by Rebecca Solnit, "Saturday" by Ian McEwen; "A Terrible Love of War" by James Hillman.