Gathering For A Harvest Ceremony 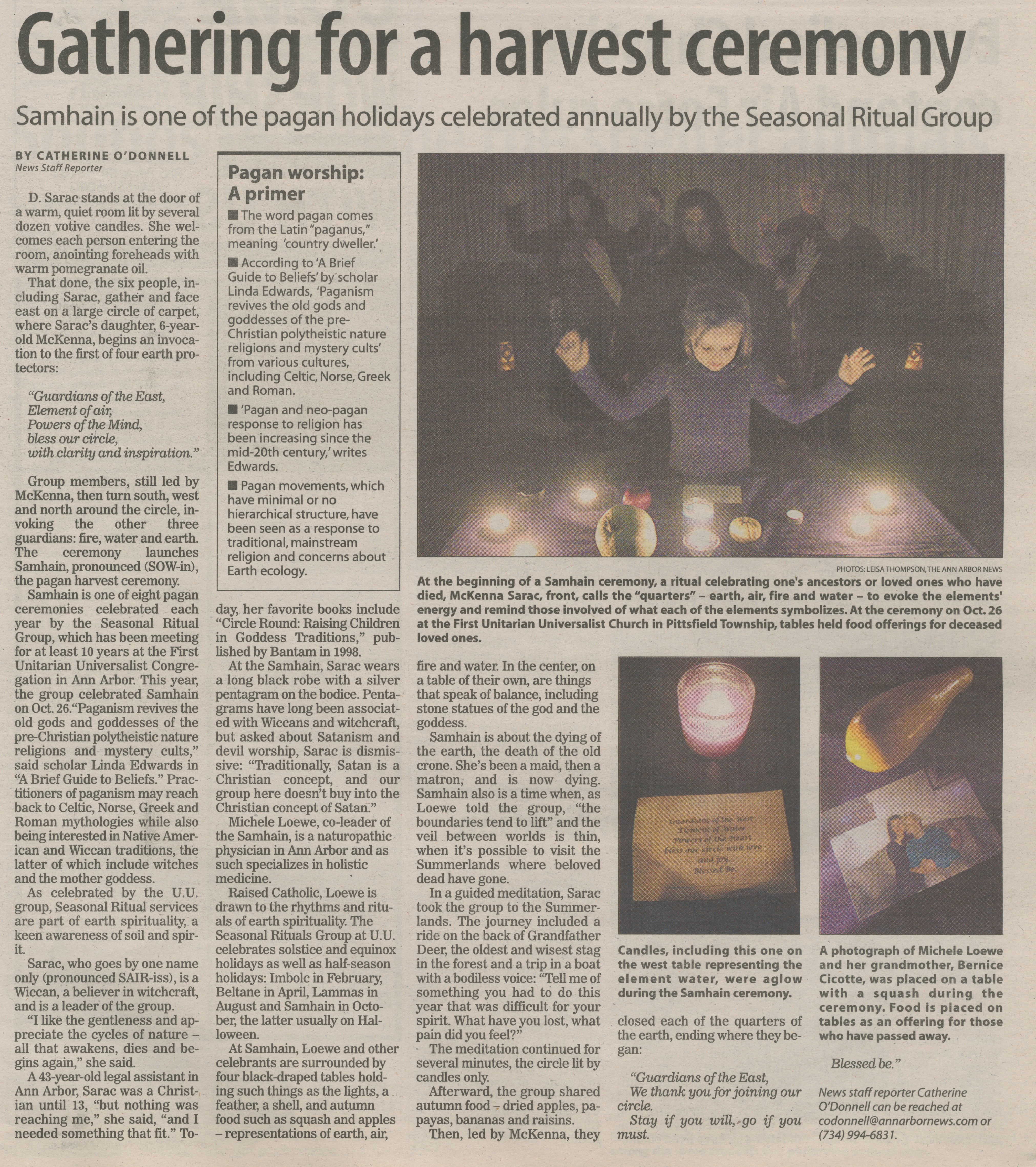 ﻿Gathering for a harvest ceremony

D. Sarac stands at the door of a warm, quiet room lit by several dozen votive candles. She welcomes each person entering the room, anointing foreheads with warm pomegranate oil.

That done, the six people, including Sarac, gather and face east on a large circle of carpet, where Sarac’s daughter, 6-year-old McKenna, begins an invocation to the first of four earth protectors:

“Guardians of the East,

Powers of the Mind,

bless our circle, with clarity and inspiration.”

Samhain is one of eight pagan ceremonies celebrated each year by the Seasonal Ritual Group, which has been meeting for at least 10 years at the First Unitarian Universalist Congregation in Ann Arbor. This year, the group celebrated Samhain on Oct. 26. “Paganism revives the old gods and goddesses of the pre-Christian polytheistic nature religions and mystery cults,” said scholar Linda Edwards in “A Brief Guide to Beliefs.” Practitioners of paganism may reach back to Celtic, Norse, Greek and Roman mythologies while also being interested in Native American and Wiccan traditions, the latter of which include witches and the mother goddess.

As celebrated by the U.U. group, Seasonal Ritual services are part of earth spirituality, a keen awareness of soil and spirit.

Sarac, who goes by one name only (pronounced SAIR-iss), is a Wiccan, a believer in witchcraft, and is a leader of the group.

“I like the gentleness and appreciate the cycles of nature -all that awakens, dies and begins again,” she said.

A 43-year-old legal assistant in Ann Arbor, Sarac was a Christian until 13, “but nothing was reaching me,” she said, “and I needed something that fit.” Today, her favorite books include “Circle Round: Raising Children in Goddess Traditions,” published by Bantam in 1998.

At the Samhain, Sarac wears a long black robe with a silver pentagram on the bodice. Pentagrams have long been associated with Wiccans and witchcraft, but asked about Satanism and devil worship, Sarac is dismissive: “Traditionally, Satan is a Christian concept, and our group here doesn’t buy into the Christian concept of Satan.”

Michele Loewe, co-leader of the Samhain, is a naturopathic physician in Ann Arbor and as such specializes in holistic medicine.

Raised Catholic, Loewe is drawn to the rhythms and rituals of earth spirituality. The Seasonal Rituals Group at U.U. celebrates solstice and equinox holidays as well as half-season holidays: Imbolc in February, Beltane in April, Lammas in August and Samhain in October, the latter usually on Halloween.

At Samhain, Loewe and other celebrants are surrounded by four black-draped tables holding such things as the lights, a feather, a shell, and autumn food such as squash and apples - representations of earth, air, fire and water. In the center, on a table of their own, are things that speak of balance, including stone statues of the god and the goddess.

Samhain is about the dying of the earth, the death of the old crone. She’s been a maid, then a matron, and is now dying. Samhain also is a time when, as Loewe told the group, “the boundaries tend to lift” and the veil between worlds is thin, when it’s possible to visit the Summerlands where beloved dead have gone.

In a guided meditation, Sarac took the group to the Summerlands. The journey included a ride on the back of Grandfather Deer, the oldest and wisest stag in the forest and a trip in a boat with a bodiless voice: “Tell me of something you had to do this year that was difficult for your spirit. What have you lost, what pain did you feel?”

The meditation continued for several minutes, the circle lit by candles only.

Then, led by McKenna, they closed each of the quarters of the earth, ending where they began:

“Guardians of the East,

We thank you for joining our circle.

Stay if you will, go if you must.

■ According to 'A Brief Guide to Beliefs' by scholar Linda Edwards, 'Paganism revives the old gods and goddesses of the pre-Christian polytheistic nature religions and mystery cults' from various cultures, including Celtic, Norse, Greek and Roman.

■ 'Pagan and neo-pagan response to religion has been increasing since the mid-20th century,' writes Edwards.

■ Pagan movements, which have minimal or no hierarchical structure, have been seen as a response to traditional, mainstream religion and concerns about Earth ecology.

At the beginning of a Samhain ceremony, a ritual celebrating one's ancestors or loved ones who have died, McKenna Sarac, front, calls the 'quarters' - earth, air, fire, and water - to evoke the elements' energy and remind those involved of what each of the elements symbolizes. At the ceremony on Oct. 26 at the First Unitarian Universalist Church in Pittsfield Township, tables held food offerings for deceased loved ones.

Candles, including this one on the west table representing the element water, were aglow during the Samhain ceremony.

A photograph of Michele Loewe and her grandmother, Bernice Cicotte, was placed on a table with a squash during the ceremony. Food is placed on tables as an offering for those who have passed away.

News staff reporter Catherine O'Donnell can be reached at codonnell@annarbornews.com or (734) 994-6831.