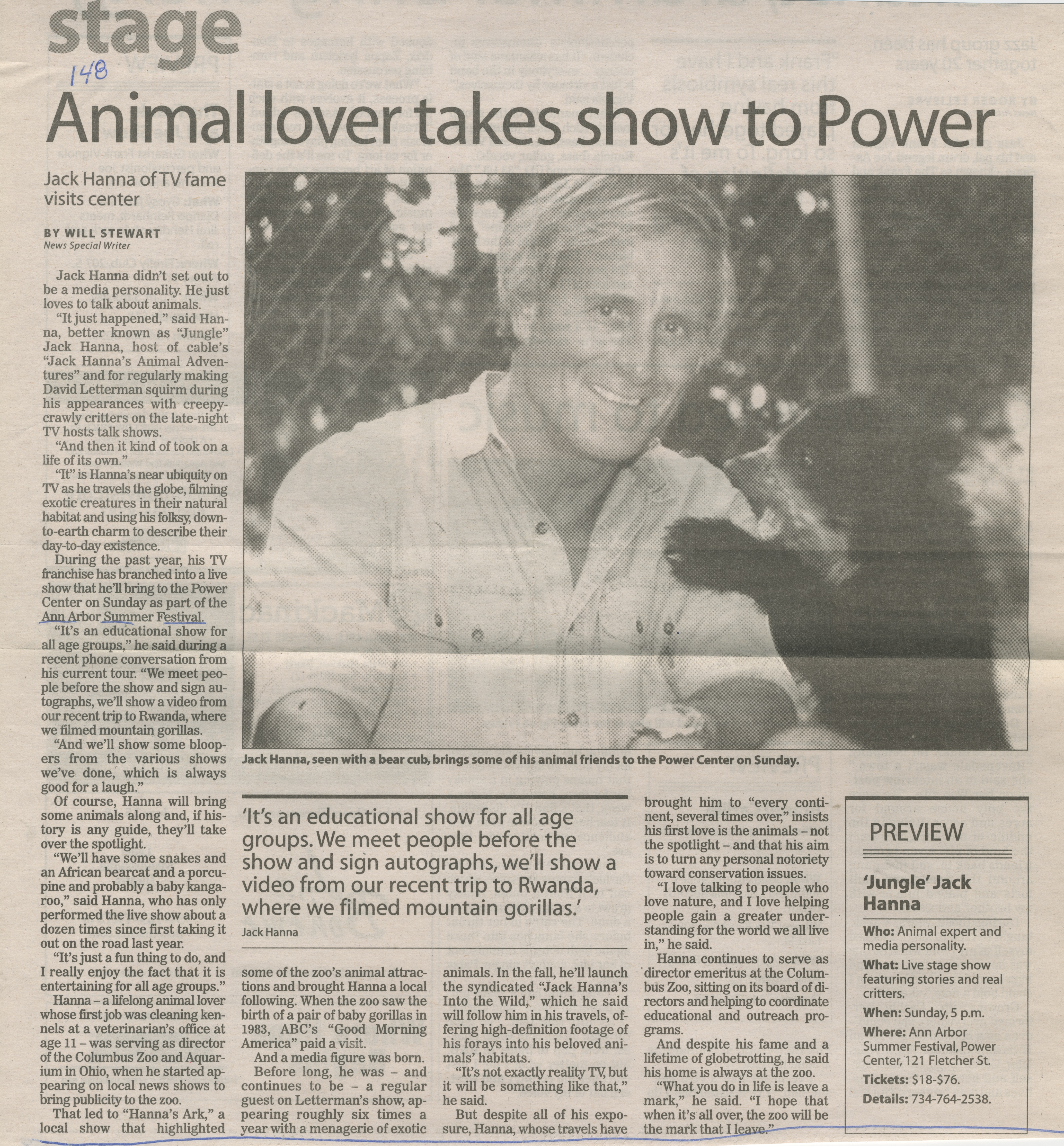 Jack Hanna didn’t set out to be a media personality. He just loves to talk about animals.

“And then it kind of took on a life of its own.”

“It” is Hanna’s near ubiquity on TV as he travels the globe, filming exotic creatures in their natural habitat and using his folksy, down-to-earth charm to describe their day-to-day existence.

During the past year, his TV franchise has branched into a live show that he’ll bring to the Power Center on Sunday as part of the Ann Arbor Summer Festival.

“It’s an educational show for all age groups,” he said during a recent phone conversation from his current tour. “We meet people before the show and sign autographs, we’ll show a video from our recent trip to Rwanda, where we filmed mountain gorillas.

“And we’ll show some bloopers from the various shows we’ve done, which is always good for a laugh.”

Of course, Hanna will bring some animals along and, if history is any guide, they’ll take over the spotlight.

“We’ll have some snakes and an African bearcat and a porcupine and probably a baby kangaroo,” said Hanna, who has only performed the live show about a dozen times since first taking it out on the road last year.

“It’s just a fun thing to do, and I really enjoy the fact that it is entertaining for all age groups.”

Hanna - a lifelong animal lover whose first job was cleaning kennels at a veterinarian’s office at age 11 - was serving as director of the Columbus Zoo and Aquarium in Ohio, when he started appearing on local news shows to bring publicity to the zoo.

That led to “Hanna’s Ark,” a local show that highlighted some of the zoo’s animal attractions and brought Hanna a local following. When the zoo saw the birth of a pair of baby gorillas in 1983, ABC’s “Good Morning America” paid a visit.

And a media figure was born.

Before long, he was - and continues to be - a regular guest on Letterman’s show, appearing roughly six times a year with a menagerie of exotic animals. In the fall, he’ll launch the syndicated “Jack Hanna’s Into the Wild,” which he said will follow him in his travels, offering high-definition footage of his forays into his beloved animals’ habitats.

“It’s not exactly reality TV but it will be something like that,” he said.

But despite all of his exposure, Hanna, whose travels have brought him to “every continent, several times over,” insists his first love is the animals - not the spotlight - and that his aim is to turn any personal notoriety toward conservation issues.

“I love talking to people who love nature, and I love helping people gain a greater understanding for the world we all live in,” he said.

Hanna continues to serve as director emeritus at the Columbus Zoo, sitting on its board of directors and helping to coordinate educational and outreach programs.

And despite his fame and a lifetime of globetrotting, he said his home is always at the zoo.

“What you do in life is leave a mark,” he said. “I hope that when it’s all over, the zoo will be the mark that I leave.

Jack Hanna, seen with a bear cub, brings some of his animal friends to the Power Center on Sunday.

'It's an educational show for all age groups. We meet people before the show and sign autographs, we'll show a video from our recent trip to Rwanda, where we filmed mountain gorillas.'

Who: Animal expert and media personality.