All that jazz (and then some) 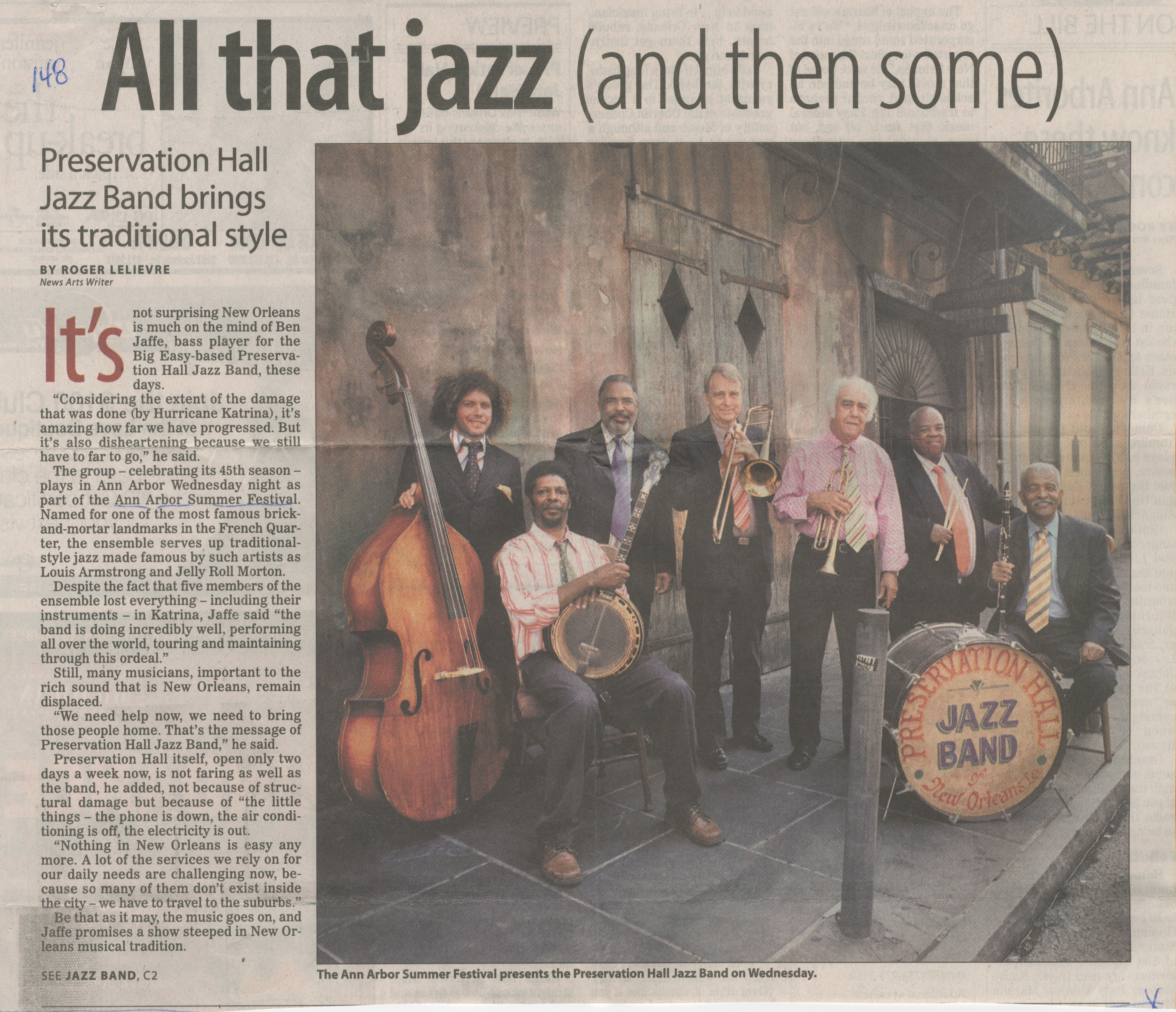 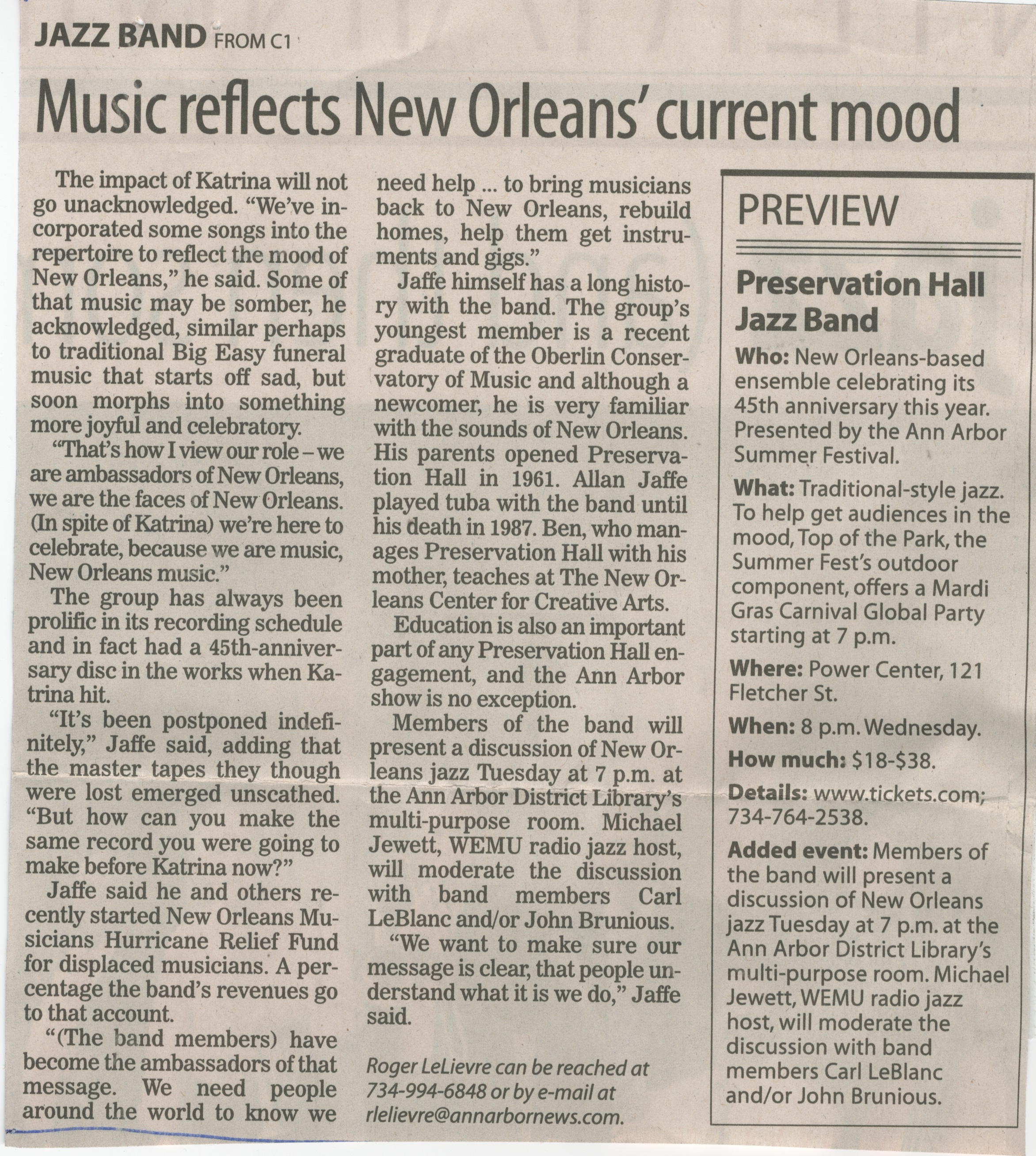 ﻿All that jazz (and then some)

It's not surprising New Orleans is much on the mind of Ben Jaffe, bass player for the Big Easy-based Preservation Hall Jazz Band, these days.

“Considering the extent of the damage that was done (by Hurricane Katrina), it’s amazing how far we have progressed. But it’s also disheartening because we still have too far to go,” he said.

The group -- celebrating its 45th season -- plays in Ann Arbor Wednesday night as part of the Ann Arbor Summer Festival. Named for one of the most famous brick-and-mortar landmarks in the French Quarter, the ensemble serves up traditional-style jazz made famous by such artists as Louis Armstrong and Jelly Roll Morton.

Despite the fact that five members of the ensemble lost everything -- including their instruments -- in Katrina, Jaffe said “the band is doing incredibly well, performing all over the world, touring and maintaining through this ordeal.”

Still, many musicians, important to the rich sound that is New Orleans, remain displaced.

“We need help now, we need to bring those people home. That’s the message of Preservation Hall Jazz Band,” he said.

Preservation Hall itself, open only two days a week now, is not faring as well as the band, he added, not because of structural damage but because of “the little things -- the phone is down, the air conditioning is off, the electricity is out.

“Nothing in New Orleans is easy any more. A lot of the services we rely on for our daily needs are challenging now, because so many of them don’t exist inside the city -- we have to travel to the suburbs.”

Be that as it may, the music goes on, and Jaffe promises a show steeped in New Orleans musical tradition.

The impact of Katrina will not go unacknowledged. "We've incorporated some songs into the repertoire to reflect the mood the New Orleans," he said. Some of that music may be somber, he acknowledged, similar perhaps to traditional Big Easy funeral music that starts off sad, but soon morphs into something more joyful and celebratory.

"That's how I view our role -- we are ambassadors of New Orleans, we are the faces of New Orleans. (In spite of Katrina) we're here to celebrate, because we are music, New Orleans music."

The group has always been prolific in its recording schedule and in fact had a 45th-anniversary disc in the works when Katrina hit.

"It's been postponed indefinitely," Jaffe said, adding that the master tapes they thought were lost emerged unscathed. "But how can you make the same record you were going to make before Katrina now?"

Jaffe said he and others recently started New Orleans Musicians Hurricane Relief Fund for displaced musicians. A percentage (of) the band's revenues go to that account.

"(The band members) have become the ambassadors of that message. We need people around the world to know we need help... to bring musicians back to new Orleans, rebuild homes, help them get instruments and gigs."

Jaffe himself has a long history with the band. The gorup's youngest member is a recent graduate of the Oberlin Conservatory of Music and although a newcomer, he is very familiar with the sounds of New Orleans. His parents opened Preservation Hall in 1961. Allan Jaffe played tuba with the band until his death in 1987. Ben, who manages Preservation Hall with his mother, teaches at The New Orleans Center for Creative Arts.

Education is also an important part of any preservation Hall engagement, and the Ann Arbor show is no exception.

Members of the band will present a discussion of New Orleans jazz Tuesday at 7 p.m. at the Ann Arbor District Library's multi-purpose room. Michael Jewett, WEMU radio host, will moderate the discussion with band members Carl LeBlanc and/or John Brunious.

"We want to make sure our message is clear, that people understand what it is we do," Jaffe said.

What: Traditional-style jazz. To help get audiences in the mood, Top of the Park, the Summer Fest's outdoor component, offers a Mardi Gras Carnival Global Party starting at 7 p.m.