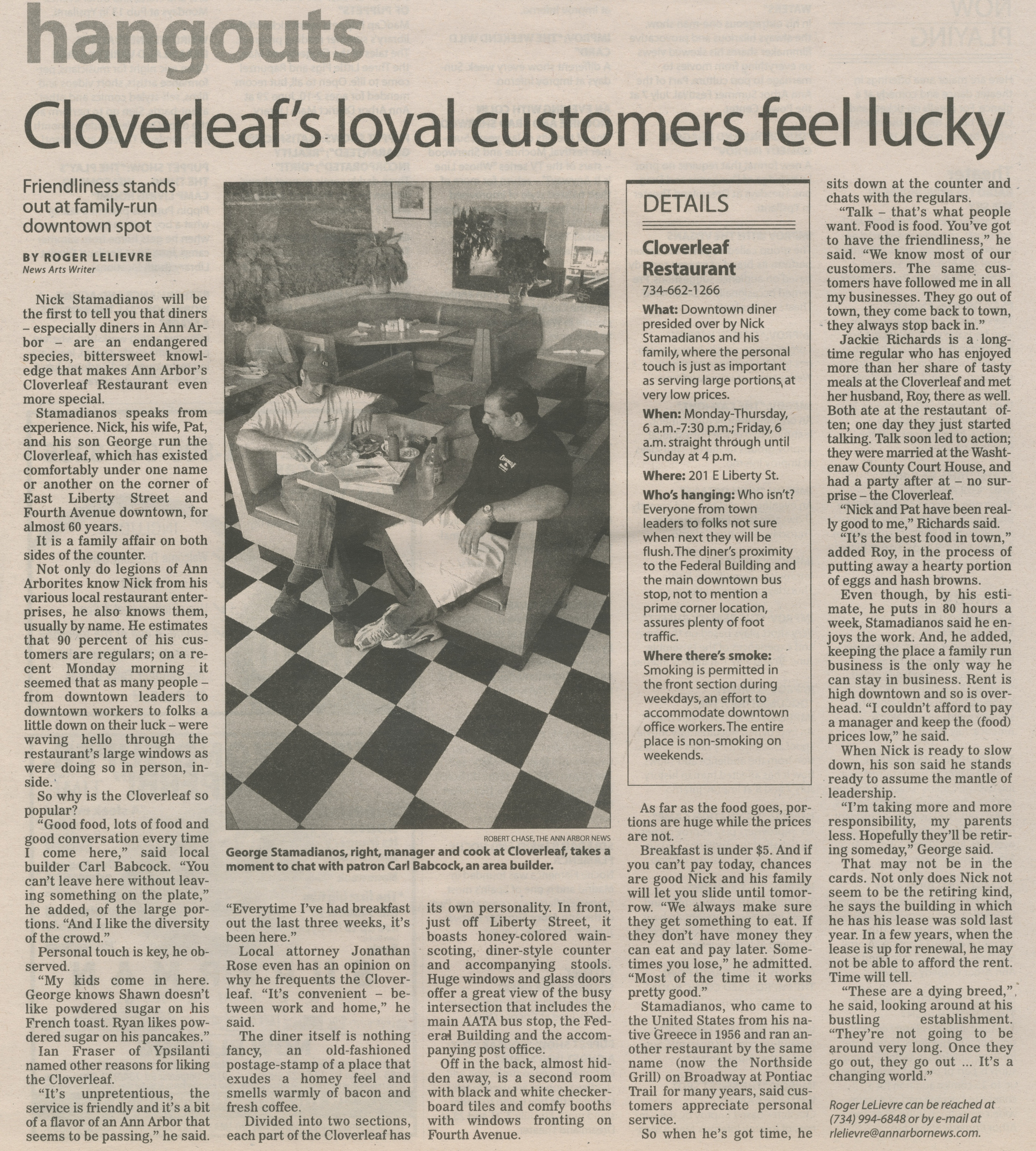 Nick Stamadianos will be the first to tell you that diners - especially diners in Ann Arbor - are an endangered species, bittersweet knowledge that makes Ann Arbor’s Cloverleaf Restaurant even more special.

Stamadianos speaks from experience. Nick, his wife, Pat, and his son George run the Cloverleaf, which has existed comfortably under one name or another on the corner of East Liberty Street and Fourth Avenue downtown, for almost 60 years.

It is a family affair on both sides of the counter.

Not only do legions of Ann Arborites know Nick from his various local restaurant enterprises, he also knows them, usually by name. He estimates that 90 percent of his customers are regulars; on a recent Monday morning it seemed that as many people - from downtown leaders to downtown workers to folks a little down on their luck - were waving hello through the restaurant’s large windows as were doing so in person, inside.

So why is the Cloverleaf so popular?

“Good food, lots of food and good conversation every time I come here,” said local builder Carl Babcock. “You can’t leave here without leaving something on the plate,” he added, of the large portions. “And I like the diversity of the crowd.”

Personal touch is key, he observed.

Ian Fraser of Ypsilanti named other reasons for liking the Cloverleaf.

“It’s unpretentious, the service is friendly and it’s a bit of a flavor of an Ann Arbor that seems to be passing,” he said.

“Everytime I’ve had breakfast out the last three weeks, it’s been here.”

Local attorney Jonathan Rose even has an opinion on why he frequents the Cloverleaf. “It’s convenient - between work and home,” he said.

The diner itself is nothing fancy, an old-fashioned postage-stamp of a place that exudes a homey feel and smells warmly of bacon and fresh coffee.

Divided into two sections, each part of the Cloverleaf has its own personality. In front, just off Liberty Street, it boasts honey-colored wainscoting, diner-style counter and accompanying stools. Huge windows and glass doors offer a great view of the busy intersection that includes the main AATA bus stop, the Federal Building and the accompanying post office.

Off in the back, almost hidden away, is a second room with black and white checkerboard tiles and comfy booths with windows fronting on Fourth Avenue.

As far as the food goes, portions are huge while the prices are not.

Breakfast is under $5. And if you can’t pay today, chances are good Nick and his family will let you slide until tomorrow. “We always make sure they get something to eat. If they don’t have money they can eat and pay later. Sometimes you lose,” he admitted. “Most of the time it works pretty good.”

Stamadianos, who came to the United States from his native Greece in 1956 and ran another restaurant by the same name (now the Northside Grill) on Broadway at Pontiac Trail for many years, said customers appreciate personal service.

So when he’s got time, he sits down at the counter and chats with the regulars.

“Talk - that’s what people want. Food is food. You’ve got to have the friendliness,” he said. “We know most of our customers. The same customers have followed me in all my businesses. They go out of town, they come back to town, they always stop back in.”

Jackie Richards is a longtime regular who has enjoyed more than her share of tasty meals at the Cloverleaf and met her husband, Roy, there as well. Both ate at the restaurant often; one day they just started talking. Talk soon led to action; they were married at the Washtenaw County Court House, and had a party after at - no surprise - the Cloverleaf.

“Nick and Pat have been really good to me,” Richards said.

“It’s the best food in town,” added Roy, in the process of putting away a hearty portion of eggs and hash browns.

Even though, by his estimate, he puts in 80 hours a week, Stamadianos said he enjoys the work. And, he added, keeping the place a family run business is the only way he can stay in business. Rent is high downtown and so is overhead. “I couldn’t afford to pay a manager and keep the (food) prices low,” he said.

When Nick is ready to slow down, his son said he stands ready to assume the mantle of leadership.

That may not be in the cards. Not only does Nick not seem to be the retiring kind, he says the building in which he has his lease was sold last year. In a few years, when the lease is up for renewal, he may not be able to afford the rent. Time will tell.

“These are a dying breed,”, he said, looking around at his bustling establishment. “They’re not going to be around very long. Once they go out, they go out ... It’s a changing world.”

What: Downtown diner presided over by Nick Stamadianos and his family, where the personal touch is just as important as serving large portions at very low prices.

Who's hanging: Who isn't? Everyone from town leaders to folks not sure when next they will be flush. The djner's proximity to the Federal Building and the main downtown bus stop, not to mention a prime corner location, assures plenty of foot traffic.

Where there's smoke: Smoking is permitted in the front section during weekdays, an effort to accommodate downtown office workers.The entire place is non-smoking on weekends.